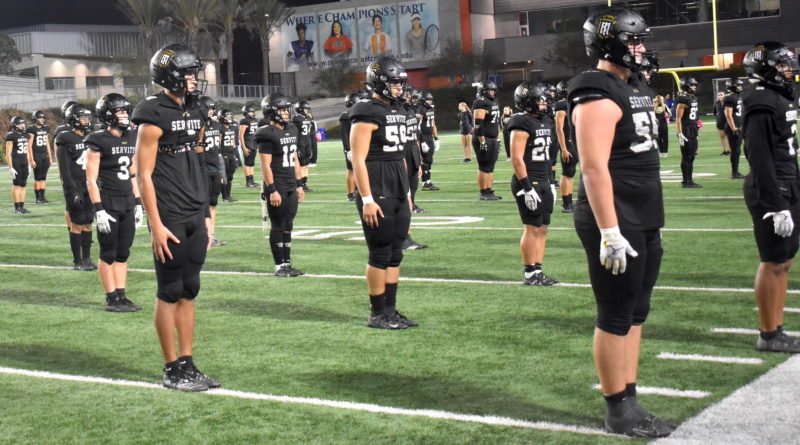 COSTA MESA– The Friars played lights-out football for about two-and-a-half quarters on Thursday, and that was enough to beat Santa Margarita 48-21. SMCHS played some impressive flashes of football in its own right, but Servite would eventually rack up yet another lopsided win against a projected CIFSS Division 1 team. Here are five takeaways from the game:

A TALE OF THREE RUNS

The Friars jumped out to a 7-0 lead when DB Brock Beuerlein recorded a highlight pick-six just two minutes into the game. The score became 14-0 when QB Noah Fifita scored on a short run, and 21-0 before the first quarter was over when RB Houston Thomas got his first rushing touchdown of the night. At that point, it looked like Servite was on the brink of running away with the game.

However, as the first quarter was all Servite, the second quarter was all SM. The Eagles scored on their first drive of the second quarter, capped off with a touchdown pass from Jaxon Potter to WR Niko Lopez with roughly 10 minutes left in the half. Then, after Servite got deep into their territory, they made a red zone stand and forced a field goal attempt, and Servite missed the FG. Santa Margarita scored on its next drive on a RB Jake Foye run, and 21-14 was the halftime score.

Still, Servite didn’t get rattled upon taking SM’s haymaker, and came out ready to dominate the second half immediately.

The Friars breezed their way to a touchdown ran in by Thomas, and he notched his third touchdown run of the night on their next drive. Tetairoa McMillan caught for a touchdown after the Friars retook possession to give them a 42-14 lead with 2:28 left in the third quarter. When Wesley Taylor caught a touchdown early in the fourth, the lead got up to 34 – one point away from a running clock. Justin Rivera would uncork a 63-yard rushing TD for the Eagles in the fourth quarter to bring the score to 48-21.

A BIRTHDAY TO REMEMBER

Thursday night was Thomas’ birthday, which made it a perfect time for him to run for a career-high 192 yards. The Servite crowd worked in a quick rendition of “happy birthday” after his first of three touchdowns, and sang it more formally after the game for good measure.

Thomas has now run for 682 yards and 12 touchdowns in seven games this season, and he’s emerged as one of the better power runners among the Southern Section’s top teams. His ability to complement one of the best passing games in the country has helped Servite’s offense at times be even more unstoppable than it was in the previous two seasons.

McMillan not only caught for a touchdown, but also recorded an interception. Aden “Ace” Eckenwiler would register another pick for Servite, and was generally a big factor in the front seven. Fifita didn’t have his best night under center, but still threw for two touchdowns and over 200 yards, and ran for a touchdown. RB Hoi Amasio-Hansen only got a few runs in for the Friars, but the big sophomore looks to have a lot of upside.

In an odd way, both of these teams impressed by showing what they can do against great competition without fully bringing their A-games.

Servite played at an elite level for just over half the game – in addition to playing fairly conservatively with a big fourth quarter lead – and that was enough to nearly put a running clock on a top-100 team in the country.

There is a sense in which it’s concerning that the Friars let Santa Margarita entirely fight its way back going into halftime. The Friars had a -35-point swing from one quarter to the next, and consistency is key for a team with aspirations to win a Division 1 championship.

But they still put the game away early in the second half against premier competition without showing any doubt. And brief spells of flatness are less likely in particularly monumental games.

Since there were only six weeks total last season, this era of Friars football temporarily missed out on a stretch of racking up signature wins against elite foes. But since football resumed in the spring, they’ve more than made up for lost time. They had four great wins in the spring, SM included, but just let this sink in: in the fall season, they’ve now beaten SM, Edison, Mission Viejo, Sierra Canyon, Bishop Amat, Helix, and Orange Lutheran by a total score of 346-90. This is what it looks like when a national elite widens the gap between itself and almost everyone else.

A FEW CLEAR POSITIVES FOR SM

After such an impressive, energetic second quarter run, the lopsided finish had to be deflating for the Eagles. But to have such a dominant second quarter against a top-10 team in the country, well, speaks for itself. As Coach Rouzier pointed out after a semi-competitive loss against St. John Bosco to open last season, Santa Margarita’s goals are a lot larger than mere flashes of competitiveness against the best teams in the country. Still, to show what they’re capable of when at their best, even though it was only for a quarter, is something to build on.

Santa Margarita’s defense forced Servite to work much harder than 48 points allowed would indicate. The Friars offense was helped out by starting off multiple possessions with good field position. Recording two picks against one of the top quarterbacks in the country is also a great sign for a somewhat young secondary that continues to impress.

21 points is only one point shy of the most Servite has given up all season, and SM’s offensive line was probably its MVP in this game. Servite’s pass-rush has given many nationally-elite teams problems over the past few years, and the Eagles had enough room to operate offensively to stay competitive.