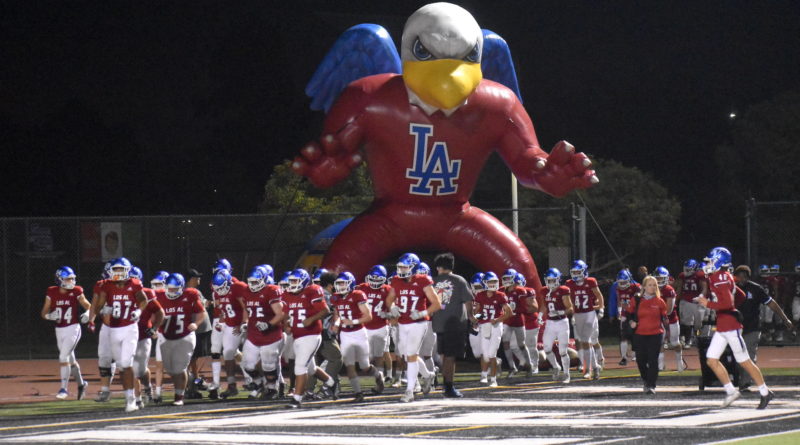 With seven weeks of the regular season behind us, almost every big matchup in SoCal football has league championship implications on the line.

Since the first week of games each season is known as “Week Zero”, we are now onto Week Seven. Here’s a look at the Top 10 Southern California high school football games to watch this week (Oct. 7-9).

The Eagles are clearly a very good team and legitimate Base Line League championship contender, but they have been unpredictable week-to-week this season. So, even though they’ll be heavily favored against Chino Hills here, it still has the makings of an exciting game. The Huskies are looking to bounce back from a 34-21 loss against Upland last week, whereas Rancho hasn’t opened league play yet. If Chino Hills brings its best effort yet, don’t rule out an upset.

Both of these teams played tough pre-league schedules in preparation for the Bay League, which should be a dogfight this season. As a result, they’re a combined 3-8. The Sea Kings have gotten blown out by Mission Hills, Edison, Corona del Mar, and Inglewood, but defeated the top team in the L.A. City Section, Banning.

Mira Costa could be argued as the major favorite on Friday, having routed Paramount and West (Torrance) and taken St. Francis, Paraclete, and Loyola all down to the wire. But the Mustangs are coming off a 16-9 loss against the league favorite, Culver City. So, while this game is likely for second place, a win here could at least potentially lead the victor to an eventual slice of the Bay League title.

Madison was on a great four-game winning streak before running into Cathedral Catholic last week, and is now officially on the hunt for a silver medal in the Western League. St. Augustine, on the other hand, has had a very disappointing 1-6 start to the season, but played Lincoln fairly competitively last week and is not a team to write off from making a late push. The Saints will be the big underdog hosting Madison, but this game could absolutely go either way, and this would be the best time to look for a huge win if the Warhawks are still stuck on last week.

After pulling off a slight upset in edging out Valencia last week, there’s an argument to be made that West Ranch is now the favorite in the Foothill League. The Wildcats will certainly be favored against Golden Valley this week, and their 52-13 win over them in 2019 was one of their signature wins of that season for what it’s worth. But if they sleep on the Grizzlies, who have some decent wins this season most recently including Hart, it could spell trouble.

What’s it like for a very strong but not world-renowned program to face Mater Dei just before entering league play? La Mirada has had a bye-week to think about that 58-7 loss. Needless to say, there’s nothing concerning about losing by 50 to the consensus top-ranked team in the country, but having gotten routed by Foothill (Santa Ana) the week before that, momentum could be a degrading factor here for the Matadores. Not that they can afford to bring less than their best this week, because Mayfair is unbeaten and knows as well as they do that this Suburban League-opener is also its title match.

The Centurions’ league title aspirations will almost certainly be decided in the next two weeks. They come into this one with competitive losses against good Capistrano Valley and Foothill (Santa Ana) teams, and just blew out Crean Lutheran in their league-opener. They come in as a slight underdog against Tustin in what’s likely the Empire League championship match, but there’s not a ton separating these teams.

After a bye-week, the Tillers bounced back from a blowout loss against Ayala to rout Pacifica (Garden Grove), and whereas they beat Capo, they also lost against Foothill much less competitively than Cypress did. If they win this week, it’s smooth sailing thereafter for a league title. Should Cypress knock them off, the Centurions still have to deal with Pacifica next week, but this game is almost certainly a championship match.

Here we return to the Base Line League. As a result of its brutal pre-league schedule and starting off league play with Etiwanda, Damien is one of the best 2-4 teams around. While Etiwanda has been one clear frontrunner in league all season, the Spartans need to find a way to bounce back from getting held to just a field goal in that 17-3 loss.

Meanwhile, Upland is much more of an underdog in league play this season than usual, but got off to a good start beating beating Chino Hills 34-21 last week. This might be a season where a one-loss in the deep Base Line League is still good enough to finish first, but even then, neither of these teams can afford a loss this week to remain in the hunt.

This season, like some other recent ones, has seen a promising year for Serra get decimated by injuries before Mission League play even starts. And last week, the Cavaliers had to cancel against Alemany due to COVID-19. That said, if they’re able to play this week and are in slightly better health than they were a month or so ago, they can’t be counted out of the league title race (how the cancellation will impact the race notwithstanding).

Chaminade has four lopsided wins against Oaks Christian, Birmingham, Crespi, and Cathedral (L.A.), and a resounding loss against San Diego powerhouse Cathedral Catholic. If Serra is healthy enough to give them a battle, this should be the first time this season we see the Eagles get tested.

For the second straight season, Santa Margarita is a massive underdog coming into this matchup, but is too good for it not to be intriguing. SM is ranked just inside the top 10 in the state, whereas Servite won this battle 42-13 and is ranked just inside the top 10 in the country. A very bad sign for the Eagles is that Servite didn’t even have 5-star WR Tetairoa McMillan or 4-star TE Keyan Burnett in that game, and still cruised past them. So, on paper, the Friars have a huge edge, but again – football isn’t played on paper, and SM is just too good for this game not to be near the top of the list. Something else to consider is that Santa Margarita notched a signature win against Los Al on Sep. 17 in which its underrated secondary held one of the more stacked passing games in the country to three scores. While containing Servite is borderline impossible for literally anyone, that win against the Griffins does bode extremely well for SM.

Speaking of Los Al, they essentially can wrap up a Sunset League title in just the second week of league play after cruising past Corona del Mar last week. They won this battle 27-20 for league supremacy in the spring, and again come in as a favorite, although not by massive proportions. Other than the loss against Santa Margarita, the Griffins are unbeaten since 2019, and are considered by many to be a top-100 team in the country. That said, nobody should be counting out Edison here, and the Chargers have won three straight including an eye-opening 42-0 trouncing of San Clemente. They’ve also already seen Servite, which means nothing Los Alamitos’ passing game can throw at them (pun not really intended) will be new to them. It’ll be an uphill battle for Edison, but this is clearly SoCal’s top game of the week by a wide margin.