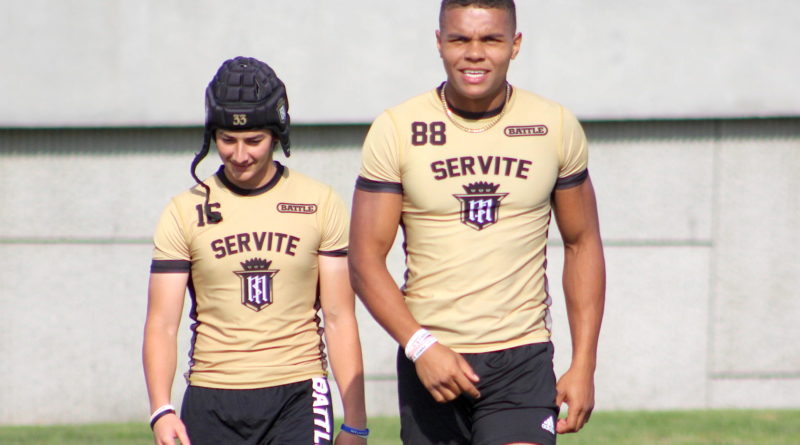 SBLive is taking a closer look at the best high school football players in California, position by position. Next up: tight ends.

We want your opinion: VOTE FOR THE BEST TIGHT END IN CALIFORNIA!

Shannon has received scholarship offers from Kansas, Minnesota and Utah State. He also pitches on the Mater Dei baseball team. Shannon has made one catch so far this fall.

Allemann has put together a strong senior season. He’s caught 17 passes for 366 yards and three touchdowns.

Gill is another multi-sport athlete on this list. In addition to football, he also plays basketball for El Camino. So far this football season, Gill has caught 26 passes for 335 yards and five touchdowns. He’s also rushed for 119 yards and one score.

Endries has received scholarship offers from multiple Ivy League schools as well as Colorado State and San Jose State. As a senior, he’s caught 21 passes for 296 yards and six touchdowns.

Hoffman has been a major part of St. Bonaventure’s success this season catching 14 passes for 258 yards and seven touchdowns. He’s a red zone weapon.

Garrett has the most touchdown catches of any player on this list with eight. He’s hauled in 21 total passes for 424 yards so far this season.

Napa is 0-5 and they don’t record stats, but Horton has been a bright spot. He’s a deep ball threat who makes very tough catches. Horton is committed to New Mexico.

Against some of the state’s best competition, Lopez has made 46 catches for 490 yards and six TD’s.

Unfortunately, Tagaloa tore his ACL earlier this season and will miss the remainder of the year. He’s received scholarship offers from Arizona State, Cal and Oregon, among others.

Flanagan is committed to Notre Dame. He’s made seven catches for 96 yards and one touchdown this fall.

Uiagalelei is the younger brother of Clemson quarterback DJ Uiagalelei and he’s one of the country’s most intriguing college football prospects. Matayo starts on both sides of the ball for St. John Bosco. His break out game at tight end came in a 38-28 win over Servite where he caught two touchdowns last spring. So far this fall he’s made 13 catches for 163 yards and four touchdowns.

Burnett is committed to Arizona. He’s caught 16 passes for 345 yards and four touchdowns this fall.

Lyons gets the No. 1 nod thanks to catching ten touchdowns in his last 12 games for Folsom as well as being the top ranked tight end recruit on the list, per 247Spots.com. Lyons is a top 100 recruit in the Class of 2023 and he’s landed scholarship offers from some of the top schools across the country including Alabama, Ohio State and USC.