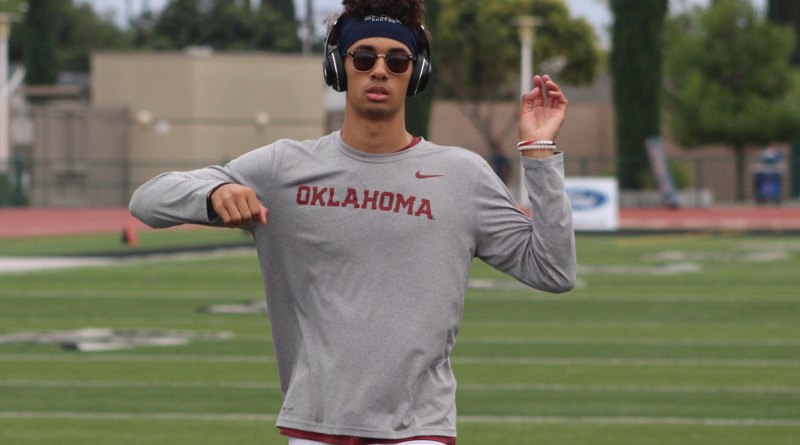 WESTMINSTER, Calif. — Thursday night’s Sunset League clash between Los Alamitos and Edison was one of the rare football games where both teams left the field somewhat happy. Los Alamitos junior quarterback Malachi Nelson, an Oklahoma commit, completed 16 of 21 passes for 172 yards and three touchdowns to lead the Griffins to a 35-28 win.

Edison trailed 35-14 with 9:19 to play in the fourth quarter, but fought back to make it a one score game before the clock struck all zeroes. Senior running back Troy Fletcher scored both of the late touchdowns for the Chargers and finished the night with three scores total. He rushed for 212 yards in defeat.

Below are three observations from the game.

BOTH COACHES SAW THINGS THEY LIKED

Los Alamitos head coach Ray Fenton and Edison head coach Jeff Grady were both complimentary of their teams after the game, although Fenton was equal parts frustrated.

“I like that our guys are mad after a win against that school,” Fenton said. “That’s a really good football team and we beat them, but we’re upset at ourselves. The coaching staff and players, we’re all upset about how we ended that game and that says a lot of good things about our team.”

“That’s what I love about Edison football,” he said. “That’s who this program is right there. There is no give up.”

After both teams turned the ball over on their first possession, Los Alamitos settled down and capped off an 80-yard drive with a two yard touchdown run from junior full back/defensive lineman Sinn Brennan. An assistant coach from Cal was at the game and spoke with coaches about Brennan afterwards.

Edison responded with a five yard touchdown run from Fletcher to even the score with 3:38 to play in the first half.

On the ensuing Los Alamitos drive, the Griffins did what they do best: attack through the air and score fast. Their drive took one minute and 15 seconds and ended with Nelson’s best thrown of the night, a beautifully lofted touchdown pass to Ethan O’Connor that went for a 41-yard score.

Edison got the ball to the Los Alamitos one inch line on their next possession but had two run plays stuffed at the goal line and then Deandre Moore broke up a pass to Nico Brown as time expired in the second quarter.

“That was big,” Nelson said.

In the second half, Nelson hit Moore for a seven yard TD to put the Griffins up 21-7 with 5:11 to play in the third quarter. Los Alamitos pooched their kickoff after the score and Edison fumbled which gave the Griffins a short field. They took full advantage as Nelson threw his third touchdown of the night to Makai Lemon to extend the Los Alamitos lead to 28-7.

With 1:57 to play in the third, Edison dug into their bag of tricks and had quarterback Tyler Gioia (who had come on in relief of starter Parker Awad) throw a sideways screen pass to Tyler Hampton who then tossed the ball to a wide open Tucker Tripp for a 20-yard Charger touchdown. That made the score 28-14 Los Alamitos.

After a Griffins three and out, Lemon intercepted Gioia which gave Los Alamitos the ball at the Edison 25. A few plays later, Los Alamitos scored their fifth touchdown of the night on a short run from Moore making the score 35-14.

Edison didn’t quit and after Fletcher’s second rushing touchdown of the game, Brown recovered a perfectly executed onside kick. After that, Fletcher quickly scored again from 42 yards out to make it 35-28 with 2:38 left. From there, Los Alamitos successfully ran out the clock.

If Edison had taken better care of the ball and had a few breaks go their way, Thursday’s result could have been different.

“I’m really proud of how we fought, but when you play against good teams and turn the ball over it costs you and it cost us today,” he said. “They played well though. Hats off to them.”

Awad threw an interception in the red zone to Gavin Porch on Edison’s first possession and then later in the first quarter, a Brian Jurado sack pushed the Chargers out of the red zone and forced a punt on 4th down and 19. Edison had four red zone trips in the first half and came away with seven points.

“There are things we can clean up on our end,” Grady said.