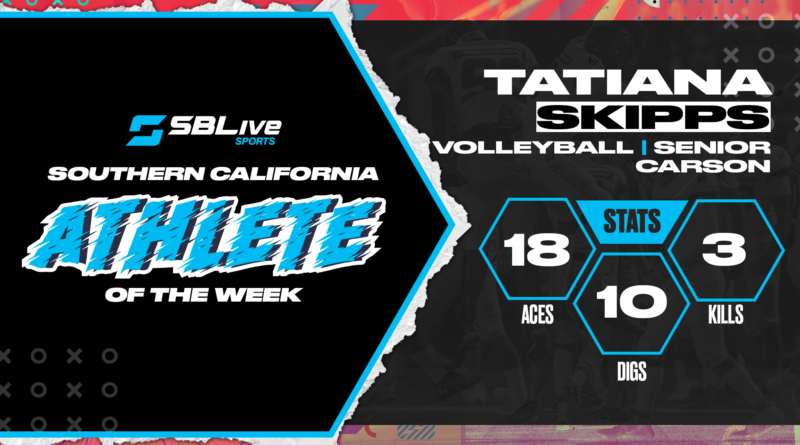 The senior totaled 38 assists, 18 aces, 10 digs and 3 kills in straight-set victories over Narbonne and Gardena.

Skipps received 58.04% of the vote, beating out Vista Murrieta RB Gavin Galzote who finished second with 21.42%. Portola RB Nova Kebeli finished third with 7.64% and La Serna WR/DB Nick Meza finished fourth with 6.65%. There were over 93,000 votes tallied this week!

MacKenzie Parsons, Poway girls volleyball: Parsons had 15 kills and four digs in a straight-set victory over Ramona on Sept. 23.

Marcus Arthur, Simi Valley RB/DB: Arthur had a six-yard rushing touchdown and returned an interception 100 yards for a touchdown against Pacifica.

Chris Melkonian, Crescenta Valley WR/DB:Melkonian caught two touchdowns on offense and grabbed two interceptions on defense including one that he returned for a touchdown.

Carson Hollandsworth, South (Torrance) RB/DB:Hollandsworth rushed for 143 yards and two touchdowns, caught five passes for 152 yards and a touchdown and also returned an interception 87 yards for a touchdown.

Anthony Chessani, Fillmore RB/DB: Chessani rushed for 154 yards and two touchdowns, caught a touchdown, and returned an interception for a touchdown in Friday’s win vs. Santa Maria.

Richard Vega, Santa Paula WR/DB: Vega rushed for 108 yards and a touchdown, caught a touchdown, and returned a punt 65 yards for a touchdown against Rancho Christian on Friday.

Roderick Robinson, Lincoln RB: Robinson ran for 164 yards and three touchdowns while averaging over ten yards per carry on Friday.