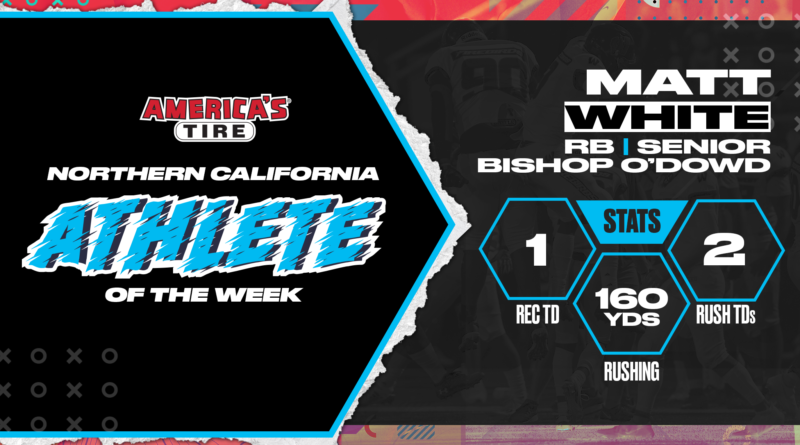 The senior ran for 160 yards and two touchdowns and had a touchdown catch in a 41-12 victory over Castlemont.

White received 43.96% of the vote, beating out Hanford QB Cayden Muir who finished second with 36.77%. Hanford LB/RB Trace Gonzalez finished third with 8.78% and Clayton Valley Charter RB Rahsaan Woodland II finished fourth with 3.61%. There were over 48,000 votes tallied this week!

Lauren Atis, Carondelet girls volleyball: Atis had 41 assists and 11 digs in a straight-set victory over California.

Annyssa Arroyo, Franklin (Stockton) girls volleyball:Arroyo had 27 digs, 11 assists and 9 kills in a 3-1 win over Stagg.

Kaylyn Cabanas, Redwood (Visalia) girls volleyball:Cabanas had 27 assists and 13 digs in a 3-1 win over Golden West.

Cayden Muir, Hanford QB: Muir led the Bullpups to an eye-opening 41-7 blowout of Tulare Western with 409 yards and three touchdowns passing, plus a rushing TD. Jayden Sudds was his top receiver.

Nicholas Coronado, Kimball QB: Coronado once again broke records in a Kimball victory. He lifted the Jaguars to a 63-56 win against Oakdale by completing 33 of 46 passes for school records of seven touchdown passes (tying his own record) and 508 yards. Coronado also ran for 53 yards and touchdown.

Travis Mariero, Kimball WR/LB: Marieiro had a career night on both sides of the ball with 191 yards and three touchdowns receiving to go with 13 tackles.

Elijah Marin, Marysville DB/RB: Marin led the Indians over Gridley 22-19 with two interceptions, a kickoff return touchdown, and 70 yards and a TD rushing.

Davis Smith, Foothill (Palo Cedro) QB: In a 42-0 trouncing of Fortuna, Smith completed 14 of 17 passes for 220 yards and three touchdowns, and also ran for a TD.

Dylan Humes, Sutter LB: Humes anchored Sutter’s defense in a 44-7 rout of West Valley with 10 tackles, a team-high three tackles for loss, and an interception. Riley Hays also had two picks for the Panthers.

Caleb Friebel, University Prep (Redding) LB: Friebel had two interceptions including a pick-six in a 28-16 win against Eureka.

Ryan Osborne, Fall River QB: Osborne led the Bulldogs to a 37-0 rout of Quincy by rushing for four touchdowns and 87 yards, and also completing 12 of 17 passes for 174 yards and a TD.

Memo Valadez, Winters WR/DB: Valadez caught for the Warriors’ lone touchdown in a 7-6 win against Durham, and also grabbed a pick.

Ty Chambers, Lemoore QB: Chambers completed 14 of 17 passes for 131 yards and two touchdowns, and also ran nine times for 81 yards and a touchdown in a 39-0 rout of Porterville.

Tanner Wilson, Sunnyside QB: Wilson completed 20 of 30 passes for 243 yards and three touchdowns, and ran for 93 yards and a TD to lift the Wildcats over Mt. Whitney 31-28.

Emilio Alaniz, Corcoran QB/DB: Alaniz threw for 165 yards and three touchdowns, ran for a tub, and snagged two interceptions in a 45-14 win against Farmserville.

Ethan Archuletta, Elk Grove QB: Archuletta completed five of six passes for 91 yards and a touchdown, and ran for 75 yards and three touchdowns on just eight carries in a 42-14 win against Davis.

Anthony Garcia, Capital Christian QB: Garcia led the Cougars to a 53-42 win over Christian Bothers with 267 yards and five touchdowns passing and 100 yards and three TDs rushing. Kanye Clark was his top receiver.

Naaman Branyan, Sacramento QB: Branyan completed 11 of 17 passes for 300 yards and five touchdowns, and ran for 73 yards and a touchdown, in a 54-22 victory against Del Campo.

Aiden Santos, Vista del Lago DB: In a 56-20 win against El Camino, Santos had an 82-yard pick-six, nine tackles, a forced fumble, and a fumble recovery. He also had a 36-yard kick return. Taine Jones was another Eagle who came up big on defense.

Joaquin Porcayo, Yuba City RB/LB: In a 58-18 victory against River Valley, Porcayo ran for 82 yards and two touchdowns, caught for 124 yards and a TD, and added five tackles and a sack.

Jacob Guevarra, Patterson QB: Patterson threw for 288 yards and three touchdowns on 17-24 completion in a 48-39 win against Merced.

Dylan Lee, East Union WR: Lee caught for 224 yards and four touchdowns in a 62-7 thrashing of Sierra. His QB, Luke Weaver, also had a strong game.

Cole Owens, Casa Roble WR: Owens lifted the Rams to a one-point win against Ponderosa with 168 yards and two touchdowns receiving and one rushing touchdown.

Spencer Gorgulho, Christopher QB: Gorgulho completed 15 of 21 passes for 201 yards and four touchdowns in a 35-0 rout of Monte Vista Christian.

Jay Lee, Christopher CB/WR: Lee had a touchdown catch and a pick-six.

Xavier Catano, Live Oak QB: Catano only attempted seven passes in a 34-0 blowout of Oak Grove, but he completed five of them for 84 yards and three touchdowns, and ran for 83 yards and a TD.

Sam Betz, Leigh RB/K: Betz erupted for 152 yards and four touchdowns on the ground in a 48-21 win over Westmont. He also went 6-7 on PATs and grabbed an interception.

Anthony Armendariz, Dublin QB: Armendariz threw for 164 yards and three touchdowns and ran for 67 yards and a TD in a 37-14 win against Liberty (Brentwood).

Damien Escarcega, Windsor RB: Escarcega had three rushing touchdowns and 104 yards of total offense in a 41-6 rout of Eureka.

Ryder Jacobson, Casa Grande RB: Jacobson had two touchdown runs and a receiving touchdown in a 46-44 victory against Vintage.

Lucas Foye, Montgomery QB: Foye threw for 281 yards and two touchdowns and ran for three TDs in a 38-20 win against West County.