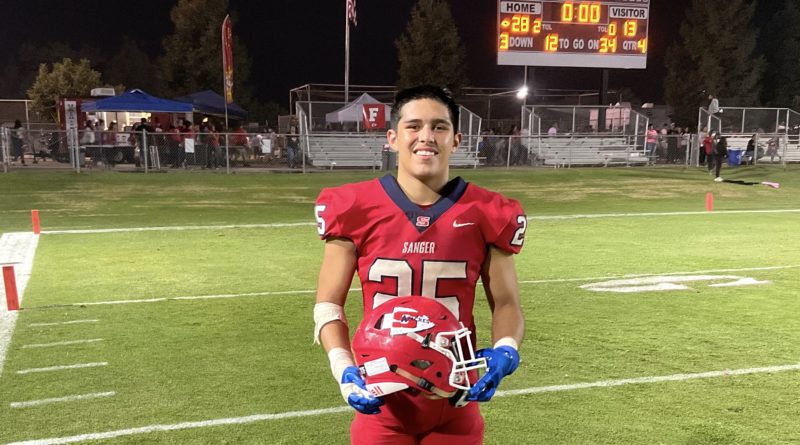 SANGER, Calif. — The calendar has officially switched from September to October which, for high school football teams all across Central California, means that the road to a league championship has started.

Friday night’s matchup between Sanger and Edison at Tom Flores Stadium was the league opener in the Country/Metro Athletic Conference (CMAC) for both teams. And Sanger senior running back Ashton Rodriguez came up big.

“At first, we didn’t really come out the way we wanted, but in the second half we started to pick it up, stuck together, and pushed through to get the win,” said Rodriguez after the game.

The game was a defensive battle in the first half that saw the Apaches get on the board first on a three-yard touchdown run by Fernando Gonzalez to take a 6-0 lead.

Edison responded with the only touchdown of the second quarter on a 19-yard touchdown pass from Ya’J Vance to Tyrece Fairly to make it 7-6 Edison at halftime.

Sanger built a 21-7 lead in the third quarter on Rodriguez’ first two rushing touchdowns – a two-yard scored and a three-yard score. Edison came right back, though, as Vance connected with Charles Bailey on a 62-yard touchdown pass to cut the lead to 21-13.

That was as close as the Tigers would get as Rodriguez added a one-yard touchdown run in the fourth quarter to close out the scoring.

“We were down 7-6 (at halftime). Coach talked and told us that the game wasn’t over, and we’re a second half team, so we came out strong and pounded them to come out with the W,” said Rodriguez.

Sanger will hit the road next Friday to take on the Coyotes of Madera High School.

Edison (1-5, 0-1) will look to rebound with a home game next Friday against the Stallions from Madera South.