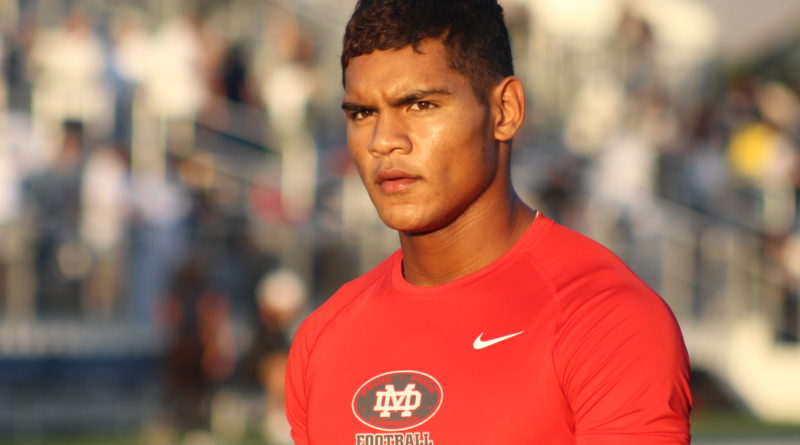 BELLFLOWER, Calif. — It takes near perfection to beat Mater Dei (4-0) and on a night when St. John Bosco (5-1) didn’t turn the ball over and went into the halftime locker room tied 21-21 with the Monarchs, they still lost 42-21.

Right now, the Monarchs are simply on another level. And it starts with Elijah Brown.

Brown, Mater Dei’s sophomore quarterback, has started nine games in his high school career and so far he’s been as good as the quarterbacks who have come before him: JT Daniels and Bryce Young, the current starters for Georgia and Alabama respectively. Brown threw five touchdowns on Friday and didn’t turn the ball over. After playing mistake free and leading Mater Dei to a 5-0 record as a freshman, he’s somehow gotten even better much to the surprise of his teammates.

“Elijah has matured a lot and that didn’t seem like it was possible in the spring,” Mater Dei senior receiver CJ Williams said. “His level of play has improved in terms of decision making and things of that nature. He comes out and he’s still that cool and collected guy and he’s somehow improved on it. I don’t know how it’s possible, but he did it.”

Williams caught two first half touchdowns from Brown in the win. After the Monarch defense stopped St. John Bosco on a fourth down at the Mater Dei 25 on their first possession of the second half, Brown marched his team down the field and hit Cooper Barkate for a 31-yard TD, his second of the night, to put the Monarchs ahead 28-21. Following the score, the Mater Dei defense forced a Braves three and out and then Brown drove Mater Dei on their fifth touchdown drive of the night culminating in a 19-yard TD pass to Jack Ressler. The Monarch offensive line played well as did senior running back Raleek Brown on Friday, but Brown was the star of the show.

Mater Dei pitched a shutout in the second half after making some halftime adjustments on that side of the ball. The Monarchs coaching staff decided to move corner Quincy Craig off of Chedon James and onto Matayo Uiagalelei. Senior Josh Hunter started covering James and then Mater Dei brought in a second safety for added cover on the senior Air Force commit. James had slashed the Monarchs for five catches, 122 yards and a TD in the first half. He had a much quieter third and fourth quarter.

For periods in the first half, Williams, a receiver, was covering Uiagalelei. Moving Hunter onto James and then Craig onto Uiagalelei led to two Braves turnovers on downs and a key three and out in the second half.

“Matayo is a bigger guy and I can guard him a little bit better,” Craig said. “I’ve had experience guarding him. So they moved me on him and I showed up a little better on that.”

Rollinson said he switched up play calls for his defensive front in the second half too.

“We did some different twists and stunts,” he said.

Those tweaks led Mater Dei to their fourth win against St. John Bosco in their last five tries.

Rollinson tried to downplay it postgame, but the truth is Mater Dei has been the better team in this rivalry dating back to the 2018 Division 1 Southern Section championship game. The Braves were better overall in 2018, but the Monarchs won the state championship after a shocking upset over their rival in the Sectional title game. St. John Bosco returned the favor in 2019 with an incredible comeback of their own in the Section title game, but remember Mater Dei won the 2019 regular season game 38-24. The Monarchs have won three straight regular season games against the Braves by at least two scores and two of those have come on the road.

This point will be moot if St. John Bosco charges back to win the Division 1 Southern Section title this season, which to be fair to them, in 2018 and 2019 the winner of the first meeting lost in the all-important second meeting, so it’s possible. But right now, they’ve lost four of the last five. No matter how you slice it, advantage Monarchs.