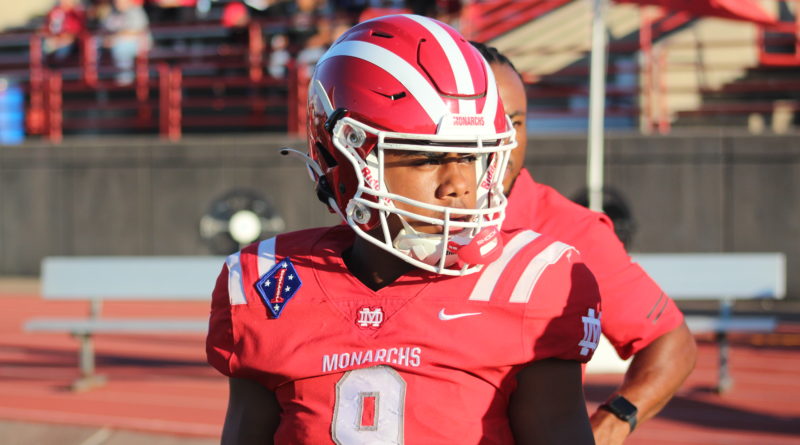 Here’s a closer look at the top high school football games from around the country being played Thursday, Friday and Saturday with an emphasis on what their results mean for the Power 25.

Keller has excelled behind junior quarterback Tre Guerra (904 passing yards, 11 TDs) and one of the state’s most elite defenses, which has allowed eight points per game through five games this season. Southlake, meanwhile, might be the hottest team in the state entering Week 6 after outscoring Arlington Martin, Prosper and Trophy Club Byron Nelson 130-14 in its three most recent victories. The Dragons’ prolific offense, led by dynamic third-year running back Owen Allen and receivers RJ Maryland and Landon Samson and junior quarterback Kaden Anderson, tallied 602 total yards in their 68-7 district-opening win last week.

Alexandria is on the outside looking in of the Power 25 and will need a win this week to stay on our radar. The Trojans top player is 2022 DL J’mari Monette.

This is the biggest game of the high school football regular season in the country. Check out the five biggest storylines here.

Tompkins toppled Katy last year to snap the Tigers’ 75-game district winning streak. However, Katy has won 13 games in a row, including the 6A DII state championship, since that loss and stifled opponents this season by allowing only 10.4 points per contest through five games. Tompkins will try to notch its second straight victory in the series and become the prohibitive district title favorite in 19-6A moving forward.

If it wasn’t for Mater Dei vs. St. John Bosco, then this would be the biggest game of the week in California. De La Salle was stunned earlier this season by St. Francis Mountain View and the Spartans desperately want to show they’re still nationally relevant. A win over St. Frances Academy, a team loaded with D1 talent, would prove just that.

After slipping up against national powers St. John Bosco and Bishop Gorman, Central can show they deserve their spot in the Power 25 with a win this week against a very good Northwestern team.

Catholic’s brutal non-district schedule continues this week with a showdown against undefeated Lafayette Christian Academy. Catholic is the No. 1 team in Louisiana and although this a tough game, they’re expected to win.

Cathedral debuted in the Power 25 last week and they finished the season ranked in 2020. The Fighting Irish have enough so far this season to make our rankings, but a challenging game on the road against La Salle awaits.

Cardinal Gibbons fell to American Heritage last season 23-17. The Chiefs will need to win this season’s matchup to stay on the Power 25 periphery.

Seminole has won 17 games in a row, but Chaminade-Madonna will be a challenging opponent. A win for Seminole could see them make next week’s Power 25 since Chaminade-Madonna has beaten Buford (Ga.) and lost by only two, 26-24, to American Heritage this season.

This game will likely decide the District 14-6A champion in Texas. Westfield will look to secure its fourth victory against a playoff team from last year so far this season, while Spring will hope to claim its second straight win in the series. The Mustangs and Lions have two of the best defenses throughout Texas high school football having yielded 10.8 and 11.3 points per contest, respectively, through four games.

Who is the second best team in Alabama behind Thompson? This game will answer that question.

Edna Karr and Alexandria are the two best teams in Louisiana behind B-R Catholic. Both teams play undefeated teams this week so the picture could be a little clearer next week in terms of what the top three looks like in the state and who could make a push for the Power 25.

Archbishop Spalding has put together a great season so far with four blowout wins and a 20-13 overtime victory over Gonzaga (Washington D.C.). Friday’s game against Calvert Hall is a must win to stay on the Power 25 radar.

This is a must win game for St. Peter’s Prep. Right now, they’re the second ranked team in New Jersey and will need a win to stay there. New Jersey’s No. 1 team is Power 25 No. 9 Bergen Catholic.

Both of these teams have aspirations to compete nationally. A win for La Salle College would show they’ve closed the gap in the Pennsylvania high school football hierarchy and are the top team in the state.