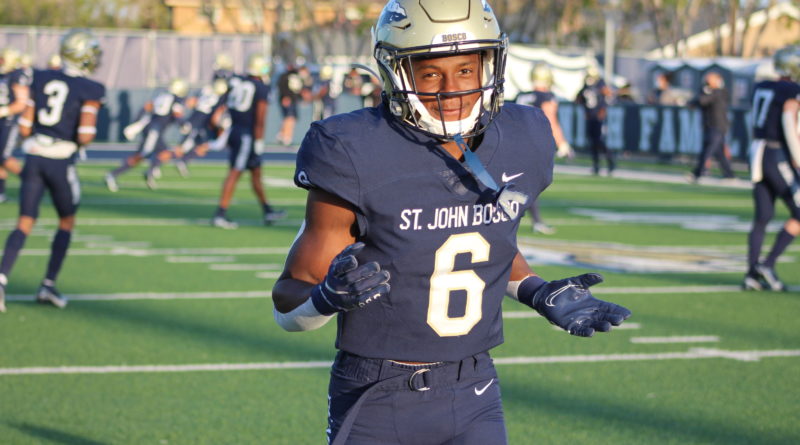 The California high school football landscape has changed considerably over the last few decades. Many old rivalries are either no longer played or have lost their luster, while many new rivalry games have emerged.

VOTE NOW: WHAT IS THE BEST RIVALRY IN SOCAL FOOTBALL?

Foothill and Tustin is one of Orange County’s top rivalries. These two teams play for the Gauntlet Trophy each season and Foothill took it this year winning 24-0.

Local prep writer John Murphy said it best when he wrote in 2010: “The schools aren’t in the same town and there’s no cool trophy at stake, but otherwise there’s precious few Inland prep football rivalries as white hot as Vista Murrieta vs. Temecula Chaparral.”

Even though Vista Murrieta has won the last 11 meetings, the two teams played an incredible 34-33 game in the spring. They meet this week at Chaparral.

Carson vs. Banning used to be the big Marine League rivalry, but that has been replaced with the Battle of the Harbor, which will be played this week at San Pedro. Many of the players in the game are sons of longshoremen. Banning’s last win in the series came in 2018. Pirates’ do-it-all playmaker Rob Sarmiento and Banning running back Jakob Galloway are the players to watch on Friday.

Outside of last year’s pandemic season, the last time one of these two teams didn’t win the Baseline League came in 2015 when Chino Hills won it. These two public schools repeatedly send their top players to Division 1 colleges. In recent years, current Ohio State QB CJ Stroud (Rancho Cucamonga) and Oregon linebacker Justin Flowe (Upland) competed in the rivalry. The teams meet this season on Oct. 15.

This game is called the Battle of the Bay and these two teams can’t stand each other. “We consider this ‘Battle of the Bay’ the single best high school football rivalry in the country,” Corona del Mar head coach Dan O’Shea told the OC Register following last season’s 10-7 rivalry win. “Our goal is to own the city of Newport Beach and we are very fortunate tonight, against a very good Newport Harbor team, in a 10-7 game. That’s how it should be in a rivalry, you want to be in a dogfight.”

Corona del Mar has won the last eight matchups between the two teams. They meet on Oct. 22 this year.

Mission Viejo head coach Chad Johnson got so tired of losing to San Clemente, he completely revamped his non-league schedule this season to toughen his Diablos team up ahead of their South Coast League clash with the Tritons on Oct. 29.

“We have a lot of non-league games where we’ll be the underdog, where in past years that I’ve been there, we’ve been picked to win most of our non-league games,” Johnson said. “So that’s a different deal for us, but we wanted to upgrade our schedule and to do that you go out and play people.”

San Clemente has won two of the last three league titles over Mission Viejo and the head to head battles are usually dog fights. In the spring, San Clemente won 10-7 and two years before that the Tritons won 21-20.

This rivalry has been one-sided, but Norco picked up a rare victory in the spring winning 38-36 to put an end to Corona Centennial’s 57-game Big VIII League win streak that dated back to 2009. This year’s game should be another great showdown. It takes place on Oct. 15.

Both of these teams have had multiple graduates sign with Power 5 schools over the years who then went on to play in the NFL.

These two teams may hate each other the most out of any of the teams on the list. The crosstown rivals have played some thrillers in the last few years with Warren winning the last three matchups. The two most recent games have featured a Warren last second Hail Mary victory in 2019 and then a last second interception in the spring of 2021. Warren won that game 41-38 and Downey head coach Jack Williams had to be restrained by assistants after time expired because he was so angry that Warren players waved/tried to stick a team flag on the Downey logo and pushing and shoving between players ensued.

“It’s just one of those heated things where kids are kids,” Warren head coach Kevin Pearson said after the game in the spring. “Is it good? No it’s not good. It’s an emotional rivalry, but I’m not condoning it.”

Unfortunately, this rivalry isn’t what it used to be. In the 1980’s, 1990’s and early 2000’s this was oftentimes the game of the year in California high school football because of all of the talent on the field. In 1991 a shooting broke out across the field at Jackie Robinson Stadium next to Dorsey and two teens were injured. “First, there was a large shot and then there were eight to 10 individual shots,” longtime Dorsey head coach Paul Knox told the LA Times. “You could hear the bullets hitting the goal posts.”

Both schools have produced multiple NFL draft picks over the years. They’ll meet this season at Crenshaw on Oct. 29.

According to the LA Daily News, “the rivalry dates to 1972 when the mayors of San Dimas and La Verne determined a Smudge Pot, which symbolized the local citrus industry, would serve as the trophy for the winning team.” This game typically draws a huge crowd. Bonita won the rivalry matchup this season 28-14.

The “Holy Bowl” is the biggest rivalry in San Diego high school football. Although it’s been pretty one-sided in Cathedral Catholic’s favor over the last decade (they lead 7-3 over that span), it’s still a really big deal to both schools. St. Augustine’s last win came in 2017. The two teams face off at Cathedral Catholic on Oct. 15.

The Turkey Tussle between Pasadena and Muir dates back to 1954. It’s played at the Rose Bowl and is scheduled for Oct. 29 this season. Read more about the game below from Pasadena High School’s website:

Possession of the Victory Bell is the prize for the winning school. The Victory Bell a long-standing tradition between Pasadena High School and John Muir High School came as a gift from the Santa Fe Railroad presented in 1955 at the pep ralley for the Turkey Tussle. The student body at PHS, which then shared the same campus with PCC, though the two were not affiliated, wanted to start many traditions which would last through the years. When it came time for the Turkey Tussle, they talked of having a bell.

Scott Fitzwater, Student Body President at that time and Jim Shelton, then Senior Class Vice-President, were instrumental in gaining the bell. Jim Shelton told his father, Raymond Shelton, of their idea and Raymond Shelton, General Manager for Santa Fe in Los Angeles at the time, was able to get the bell for PHS. The bell formerly rang from the top of an old steam locomotive and to Mr. Shelton’s knowledge is the only one ever given to a school.

The bell was intended to be used, as it still is, as a perpetual trophy to rotate between John Muir High School and Pasadena High School, being kept for the year by the team that wins the homecoming game.

This game is rich in history and although it’s been dominated by Mater Dei in recent years, it’s one of the only rivalry games that has pitted elite talent against elite talent for decades. Servite’s last victory came in 2011, but in the spring, Mater Dei won 24-17 in a game that came down to the final play.

“What you saw tonight was a classic Mater Dei Servite game,” Mater Dei head coach Bruce Rollinson said. “They gave us everything we could handle.”

The East LA Classic is a massive draw for high school football fans in that region of Los Angeles. It wasn’t played last season due to COVID-19, but before that, the big game between Garfield and Roosevelt at East LA College would routinely draw in excess of 25,000 people. The 86th meeting between the two schools will take place this season on Oct. 29. It’s the Homecoming game for both schools and alums from all over the world typically come to LA to watch it live.

In 2019, Roosevelt head coach Aldo Parral spoke before the game and said, “I was happy Garfield lost in the state finals [in 2018],” at a press conference.

Garfield ended up getting the last laugh with a 25-0 win in 2019 though. The Bulldogs have won 10 East LA Classics in a row.

Over the last decade, Mater Dei vs. St. John Bosco football contests have gone from routine league games to the biggest high school football rivalry in the country. St. John Bosco and Mater Dei have played for every Southern Section Division 1 championship since 2016 and more than 100 FBS players have suited up for the two squads during that time. The two teams are among the most talented in the country each season, they’re well coached and they’re now bitter rivals. And they’ll play on Friday to decide who the best team in the country is halfway through the 2021 season.