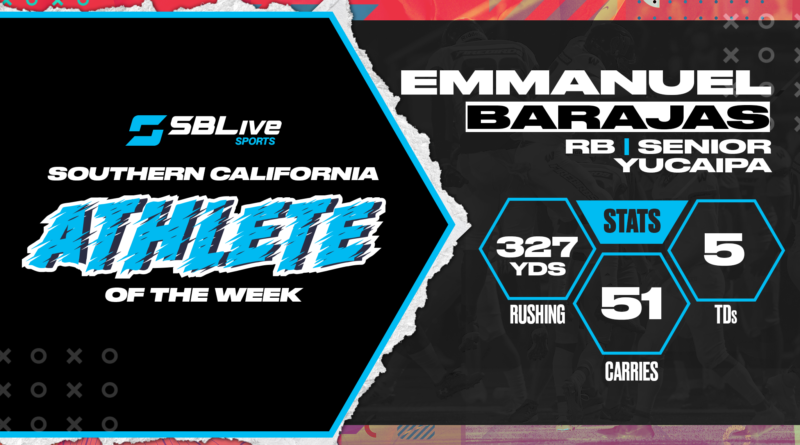 Congratulations to Yucaipa running back Emmanuel Barajas for being voted SBLive’s Southern California High School Athlete of the Week for Sep. 13-19!

Barajas carried early and often on Friday night, finishing with 51 carries for 327 yards and five touchdowns in Yucaipa’s 37-28 win against University City.

Barajas received 38.96% of the vote, beating out Rancho Bernardo RB Frankie Franchina who finished second with 32.16%. Poway RB Connor Rath finished third with 12.1% and Ayala QB Bryan Wilson finished fourth with 9.79%. There were over 74,000 votes tallied this week!

Anika Huelskamp, Oxnard volleyball: Huelskamp had 17 digs, 15 kills and 2 aces in a 3-2 win over Ventura.

Connor Rath, Poway RB: Rath was dominant in Friday’s win against Vista. He carried 17 times for 358 yards and four touchdowns and also had one catch for 28 yards and another touchdown.

Ty Pierson, Arcadia RB: Pierson had a rushing touchdown, receiving touchdown, and a 57-yard punt return for a touchdown to help the Apaches beat La Salle 30-28.

Kadin Semonza, Mission Viejo QB: Semonza passed for 278 yards and four touchdowns to help the Diablos get a big 30-7 win against Alemany.

Nathan Acevedo, Lincoln WR: Acevdeo continued his big season for the Hornets, catching eight passes for 143 yards and a touchdown against Steele Canyon on Friday.

Angelino Anthony Trapasso, Rancho Buena Vista RB:Trapasso ran for over 100 yards for the fifth consecutive game and finished with 235 yards and three touchdowns against Escondido.

Jackson Volk, Thousand Oaks DL: Volk had nine tackles, 2.5 sacks and a forced fumble in a one-point loss to Segerstrom.

Zachary Siskowic, Orange QB: Siskowic passed for 477 yards and seven touchdowns to lead the Panthers to a 67-47 win over Capistrano Valley. He also ran for 73 yards and a touchdown.

Bryan Wilson, Ayala QB: Wilson had 289 passing yards, three passing touchdowns and one rushing touchdown in the Bulldog’s win over Tustin on Thursday.

Ilyas Abdullah, Westchester RB: Abdullah had 301 rushing yards and five touchdowns while averaging nearly 17 yards per carry in a 42-6 win over Jefferson.

Kaden Taylor, Pasadena QB: Taylor passed for 368 yards and four touchdowns and showed off his rushing skills with 142 yards and two touchdowns on the ground.

Elijah Yoshinaga, Elsinore RB: Yoshinaga rushed for 205 yards and three touchdowns in a 38-6 win over Lakeside.