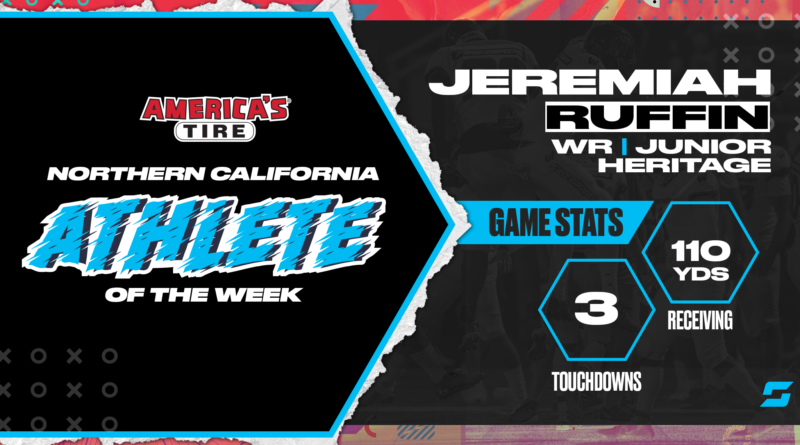 The junior caught for 110 yards and three TDs in the Patriots’ 41-15 win against the James Logan Colts.

Ruffin received 36.45% of the vote, beating out California RB Devan Love who finished second with 35.48%. Coalinga QB Jett Garcia finished third with 18.28% and Coalinga WR Devin Sanchez finished fourth with 7.14%. There were over 79,000 votes tallied this week!

Dreyan Paul, McClymonds QB: Paul helped lead McClymonds to a 33-22 win against Marin Catholic completing 24 of 31 passes for 234 yards and three touchdowns. He also ran for 94 yards and two TDs.

Jessica Dean, Hillsdale volleyball: Dean had 15 digs and 14 kills to lead Hillsdale to a straight-set victory over Menlo-Atherton on Sept. 16.

Jayden Davis, Bullard WR/DB: Davis led Bullard to a 35-12 upset of Clovis with a rushing touchdown, two receiving touchdowns including a 75-yarder, and 15 tackles.

Noah Noyola, Hanford SS: Noyola helped lead the Bullpups to a 35-7 victory against Madera with 17 tackles, two tackles for loss, and a fumble recovery, plus a 64-yard touchdown run on offense.

Carmine Ficher, Tulare Western QB: Ficher completed 22 of 33 passes for 317 and four touchdowns in a 45-7 rout of Mt. Whitney. WR Andrew Maciel had a strong game as his top target.

Lamar Radcliffe, Sacramento RB/DL: Radcliffe had a game for the ages to lead the Dragons over Christian Brothers 39-34. He ran for 373 yards and three TDs, forced a fumble, blocked a field goal, and recorded a tackle for loss.

TJ Hall, San Joaquin Memorial WR/DB: Hall caught for 92 yards and a touchdown and grabbed a pick in a 47-0 rout of Washington Union.

Tyler Tremain, Folsom QB: As is the case nearly every week, Tremain threw five touchdown passes in a win for the Bulldogs. This one was a 54-7 rout of Oak Ridge.

Colt Matteson, Bishop Union LB/WR: Matteson caught for 55 yards and a touchdown, and also recorded a pick-six and a fumble recovery on defense.

Cheveyo Marquez, Bishop Union LB: Marquez grabbed two interceptions he returned for a total of 52 yards and one touchdown, and also had seven tackles and a touchdown catch.

Devin Sanchez, Coalinga WR: Sanchez had an 85-yard kickoff return touchdown and a touchdown catch in a 42-0 domination of Sierra Pacific.

Jack Carner, Pioneer RB: Carner racked up 308 yards and four touchdowns on the ground to lead the Patriots to a 34-13 win over River City.

Danny Olivera, Firebaugh RB: Olivera ran for 256 yards and five touchdowns on 11.6 yards per carry in a 56-12 defeat of Kerman.

Ethan Currie, Los Gatos LB: Currie recorded 12 tackles (one for loss) and a forced fumble in a 49-21 victory over Half Moon Bay.

Santino Acevedo, Cardinal Newman RB/LB: Acevedo ran for two touchdowns, caught for a touchdown, and totaled 159 yards of offense in a 37-21 win against De Anza. He also led the defense with eight tackles.

Shay Carr, Gridley QB/DB: Carr did a little bit of everything in a 35-12 win against Corning. He threw for two touchdowns and 124 yards on a whopping 13-14 completion, ran for 155 yards, a touchdown, and two two-point conversions, made six tackles, and even recorded a 40-yard punt inside the 20.

Brayden Schumann, Orland RB/SS: Schumann ran for 119 yards and two touchdowns, made seven tackles and a TFL, and forced a fumble in a 55-0 blowout win against Willows.

Grant Foster, Orland QB/P: Foster completed three of four passes for 26 yards and a touchdown, ran for 209 yards and three touchdowns, and kicked two punts a total of 72 yards.

Lolo Mataele, Patterson RB/LB: Mataele helped lead the Tigers to a 63-14 rout of El Capitan with seven carries for 60 yards and three TDs plus six tackles, of which a whopping five came for loss.

Devan Love, California RB: Love ran for 133 yards and two TDs on just eight carries in a 41-7 win against Milpitas.

Curron Borders, Antelope RB: Borders ran for 204 yards, four touchdowns, and a pair of two-point conversions in a 55-21 win over Yuba City.

Nicholas Coronado, Kimball QB: Coronado threw for 343 yards and five touchdowns on just 17 pass attempts, of which he completed 15, in a 54-6 stomping of Weston Ranch.

Blake Nichelson, Manteca RB: Nichelson turned just six carries into 187 yards and four touchdowns in a 65-0 annihilation of Sierra. Lyon Colon also had a great night running the ball for the Buffaloes.

Jayden Petrus, Dublin RB: Petrus rushed for 170 yards and three TDs in a 46-8 rout of Irvington.

Diego Davis, Vintage RB: Davis both ran and caught for exactly 44 yards and two touchdowns in a 57-6 trouncing of Oakland.

Chase Vehmeyer, Windsor QB: Vehmeyer completed 14 of 19 passes for 247 yards and four touchdowns in a 52-7 blowout against Napa. He also ran for a touchdown and 26 yards.

Dante Antonini, St. Vincent de Paul WR/LB: Antonini posted 12 tackles, two TFLs, a sack, and a 61-yard receiving touchdown. He added a 16-yard pass and a 25-yard run on one attempt each.

Garrett McGriff, Jesuit RB/LB: McGriff ran for 166 yards and two TDs on just seven carries in a 49-7 rout of Pleasant Grove. On defense, he added three tackles, a tackles for loss, and a forced fumble.

Trevon Atkins, Cosumnes Oaks LB/DL: Atkins recorded eight tackles (one for loss), an interception, a forced fumble, and a fumble recovery in a 28-13 win versus Davis.