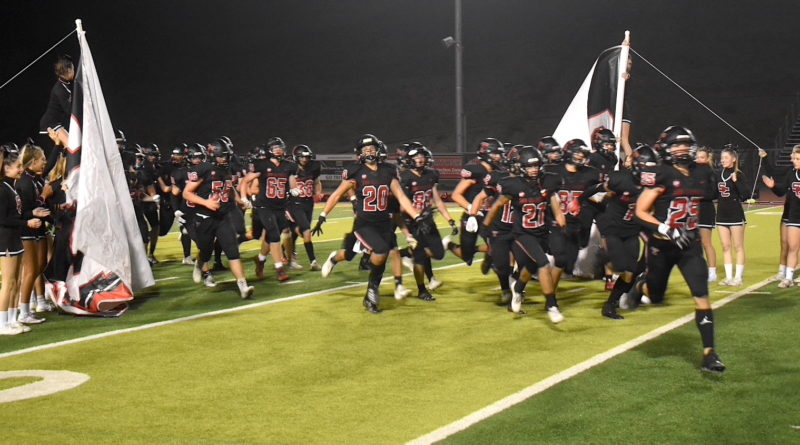 SAN CLEMENTE– The Tritons pulled out a memorable 21-20 win at home on Friday night, snapping a two-game slide and brief rut on offense. Blake Allen ran for a touchdown and a 2-point conversion, and had a receiving touchdown for SC. Here are five takeaways from the game:

The whole game, there was just a sense in the air that this one was coming down to the last second. And it certainly did.

San Clemente struck first when Blake Allen took a screen pass from Lachlan Rosmalen to the house. But Murrieta Valley tied it at seven on a short run from Asa Chatman before the first quarter was over.

The Tritons retook the lead on an Allen rushing touchdown a little over halfway through the second quarter. Isaac Vega blocked the PAT for the Nighthawks to keep their deficit at 13-7, and Noah Serna kicked a field goal with 11 seconds left to cut it to 13-10.

Murrieta Valley seemed ready to take control of the game after Brandon Rose threw a touchdown pass to Tiger Bachmeier with 6:19 left in the third quarter. Their touchdown drive to open the second half looked effortless, and they followed it up by very quickly forcing San Clemente to punt. But the Tritons defense had no trouble reasserting its will, and they held the Nighthawks to just one more field goal leading up to Murrieta Valley’s final drive of the game.

Trailing 21-20, they drove all the way to San Clemente’s one-yard line, and took a timeout with three seconds left in the game. The Tritons were essentially a PAT from losing what would’ve been a heartbreaker, but their wall collapsed on the Nighthawks to block their field goal attempt from minimum range. It appeared that multiple Tritons got a piece of the field goal attempt.

The fact that the Tritons won this game by blocking a field goal at their own one-yard line was perfectly fitting. They held an established offensive powerhouse to 20 points, and prevented touchdowns from inside their red zone a whopping three times. That said, San Clemente is an established defensive powerhouse in its own right, with the exception of last week when they got demolished 42-0 by Edison. So, the bounce-back performance shouldn’t come as too surprising.

The game featured an unusually long injury stoppage with 3:55 left in the third quarter when SS Jack Smith went down. He would eventually be carried off by an ambulance, and the game was stopped for more than 40 minutes. Smith gave a thumbs up and a fist pump to the crowd as he was being lifted into the stretcher.

“We just did this for Jack, we finished the game off for Jack,” said Allen.

“[We] just play together as a family, and for each other.”

To put it bluntly, last week’s loss against Edison was San Clemente’s worst showing on both sides the ball in at least a few years. That’s partially due to having played a seriously formidable Chargers squad, but the Tritons play outstanding teams all the time, and 42 points was their worst margin of victory in a loss since 2018 against none other than St. John Bosco.

So, to bounce back on both sides of the ball in this one shows what San Clemente is both capable of and made of.

Junior RB/SB Blake Allen found the end zone three times in this one, and has statistically been one of the best breakout offensive players in the state this season. After starting at DB as a sophomore in the spring – a position he still has a significant role at – he has an even bigger role on offense as San Clemente’s new focal point.

He has bravely and effectively stepped up in a new role filling some of the biggest RB shoes in the state, as 2021 first team all-state Triton RB James Bohls is now in his first year at Arizona. In recent years, San Clemente has been dependent on its ability to control the pace of the game with a heavy dose of short-gain plays that methodically run clock and move chains, so having a workhorse of a feature back is more important for the Tritons than for most other teams.

Does Allen feel much pressure around his new role?

“Definitely before the season there was [nervousness], but since the season started and we’ve been getting going, it’s all good.”

Allen entered this game averaging 116.6 yards of offense per game, and certainly surpassed that on Friday in lifting SC to a big win. So it’s safe to say he’s been “getting there” with great haste.

SC has been testing itself against some strong foes, and its offensive improvement came just in time to start one of the tougher league gauntlets in the state, South Coast League play. Coming into this game, San Clemente had scored only 22 points in its previous four games, but there was a clear sense of rhythm on offense on Friday.

“It’s definitely been tough, but we’ve been grinding,” said Allen. “And this tough preseason schedule will get us ready for league.”

Senior QB Lachlan Rosmalen was very steady for the Tritons, make timely reads and avoiding mistakes in a game where none could be afforded.

MURRIETA VALLEY’S EARLY STRUGGLES COULD BE A BLESSING IN DISGUISE

Without a doubt, the 2-3 Nighthawks are one of the best sub-.500 football teams in California. All three of their losses have come against heavyweights in Apple Valley, Norco, and San Clemente, and the latter two losses were by just one point. While they aren’t playing up to their expectations for the first half of the season, there’s no question that Murrieta Valley is a very good team.

That said, they probably don’t project as a CIFSS Division 2 team after this loss, and will likely end up in Division 3 if they don’t go on a dominant Southwestern League title run. So, there are two reasons their 2-3 start might prove to be a hidden blessing. One is if it turns out to be a wakeup call that leaves them ready to sweep their league, in which case they’ll probably enter the postseason in Division 2 and ready to make some real noise. The other is if they slide into Division 3, in which case a healthy Murrieta Valley team will almost certainly be one of the top favorites for a division title, even if they only finish the season 6-4 or 5-5.