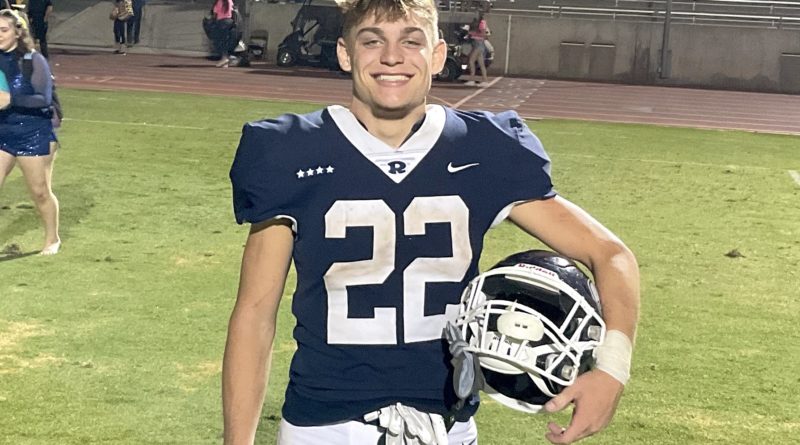 VISALIA, Calif. – Friday night’s CIF Central Section showdown between Redwood and Kingsburg at the Mineral King Bowl in Visalia had everything a fan could look for in a high school football game – lead changes, big plays, and a thrilling finish.

Redwood’s defense stopped Kingsburg on a two-point conversion with 34 seconds remaining to give the Rangers a 20-18 win – Redwood’s first win of the fall 2021 season.

“You know, our kids came out ready to play looking for their first win to get that monkey off our back,” Redwood coach Kevin Scharton said. “We came out big tonight, and kids made a big play at the end of the game. We were 0-3, we could have very easily went in the tank, but our kids kept fighting and clawing and finally getting that first win.”

Kingsburg took an early 6-0 lead on a 38-yard touchdown pass from junior quarterback Ethan Winslow to junior wide receiver Connor Mcfall. The Vikings doubled their lead to 12-0 in the second quarter on an 11-yard touchdown run by junior running back Trace Jackson.

Redwood finally got on the board late in the second quarter on a touchdown run by Karson Everett to make it 12-7 at halftime.

That set up the thrilling finish as Kingsburg scored with 34 seconds left in the game on a 30-yard TD pass from Winslow to Jackson in the back of the end zone to make it 20-18. Redwood’s defense then came up with the biggest play of the game to stuff Kingsburg’s potential game-tying two-point conversion.

For Redwood, they had a couple of games that were single-digit losses, and Scharton said the experience gained in those close losses – along with Friday’s big win – will help them as they get ready to go into West Yosemite League play starting next week.

“It’s a great confidence boost, getting a win and going into league,” Scharton said. “We have a lot of inexperienced players, especially some of our sophomores whose first high school game was a varsity game. We’re just learning how to execute, what it takes to win a game, playing to the end, and I think our kids grew up tonight.”

For the Rangers, they enter West Yosemite League play at 1-3 and will host the Tigers of Lemoore next Friday in their WYL opener. Kingsburg, who drops to 3-2 on the season, will kick off Central Sequoia League play next week when they travel to Exeter to face the Monarchs.