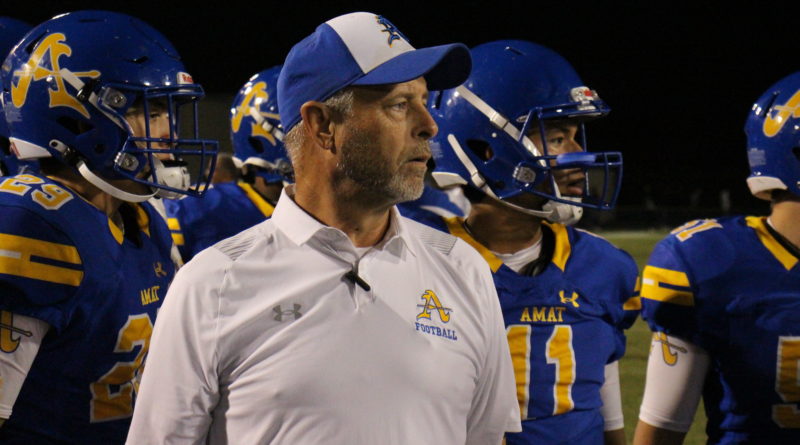 LA PUENTE CALIF. — Bishop Amat head coach Steve Hagerty had to make a major decision Friday morning. Down nine starters and 14 players overall due to COVID-19 exposure, should his Lancers team play their game against Damien?

After learning of a positive test, the team worked through their contact tracing protocols and tested all players.

Once Hagerty learned he could field a team, he didn’t hesitate and announced the game was on.

“We really wanted to play and not back out,” he said. “I know that was the rumor that we were trying to back out, which was really silly, but we’re all living in weird times right now and I’m just glad we were able to get after it.”

Bishop Amat and Damien went blow for blow for two quarters and then 11 minutes and 50 seconds of the third Friday night at Kiefer Stadium. Lancers’ senior Mark Thomas returned a Damien kickoff eighty yards with ten seconds to play in the third quarter, which put the Lancers ahead 42-28. The Spartans didn’t score again and Bishop Amat went on to win 53-28. Below are three takeaways from Friday night’s game.

Bishop Amat never trailed in the game but it was tied 7-7 early on. Following an interception from Robert Alvarado that gave the Lancers a short field in the first quarter, Bishop Amat senior quarterback Tobin O’Dell scored the opening touchdown on an 11-yard run. Damien answered on a four yard TD run from freshman Steve Chavez.

Amat went up 14-7 with 2:08 to play in the first quarter when O’Dell hit Aiden Ramos on a screen pass that went for a 63-yard TD. Early in the second quarter, Ramos caught another O’Dell pass for a touchdown, this time from 30 yards out.

Chavez scored his second touchdown of the night with 2:55 to play in the first half on a two-yard run, which made the score 21-14 at halftime.

The third quarter was a scoring frenzy. Bishop Amat put up a TD just two plays into their opening possession of the second half thanks to a 65-yard run from O’Dell and then a seven yard TD scamper from Ramos. The Spartans responded with a gutsy nine-yard third down pass from Dylan Gutierrez to Roman Toilolo that made the score 28-21 Bishop Amat.

On Bishop Amat’s next possession, O’Dell hit Josiah Johnson for a 34-yard TD to give the Lancers a 35-21 advantage. Chavez scored his third short-yardage TD of the night on Damien’s following possession and then Thomas returned the ensuing kickoff 80-yards to virtually seal the Lancers’ win. Bishop Amat won the fourth quarter 11-0 and the game 53-28.

O’Dell finished the game completing nine of 19 passes for 219 yards and four TDs. He also rushed for 87 yards and a touchdown. For Damien, Chavez rushed for 113 yards and three touchdowns, but he did lose a fourth quarter fumble.

Hagerty credited the Bishop Amat program for still pulling out a win despite the loss of nine starters on Friday.

“I think when you have a program that has tradition and standards and expectations, when kids are out, other kids step up to the cause,” Hagerty said. “If you count just on the players and not on the foundation of a program then you can be susceptible when you don’t have kids. Our kids stepped up and I thought it was a great night for them…The guys up front did a good job. They took it personal and showed that they could play.”

DAMIEN NOT QUITE READY FOR PRIME TIME

Bechtal has the Damien program in a much better place than it’s been over the last decade, but in Friday’s loss to Bishop Amat, the Spartans came up a little short against the San Gabriel Valley’s traditional top team. Damien has improved drastically, but they aren’t at the top of the mountain yet.

“We’ve got to learn how to prepare,” Bechtal said. “We don’t prepare consistently all week and when you play a good team that’s the result. I think the biggest takeaway is that these guys need to figure out that this is big boy football. We’re not playing the local public schools. We’re playing good private schools in our preseason and we need to prepare better to give us a chance.”