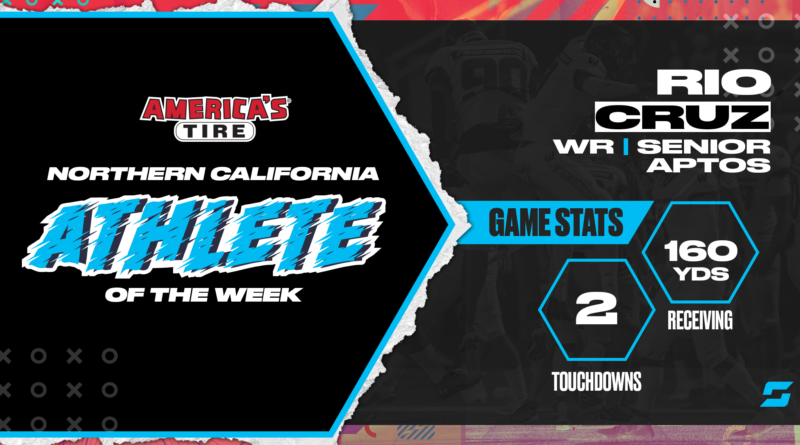 The senior caught for 160 yards and a touchdown and also ran for a touchdown in a 47-42 win against Palma.

Lauren Atis, Carondelet volleyball: Atis had 37 assists and 11 digs in a 3-2 loss to Foothill on Sept. 9.

Nicholas Coronado, Kimball QB: Coronado topped himself again last week in a 40-point win against Escalon, throwing for 516 yards and five touchdowns on 33-41 completion. He also had five carries for 50 yards.

Willie Clifton, Kimball WR/DB: Clifton was one of numerous other Jaguars who had monster games, finishing with 188 yards, two touchdowns, and a two-point conversion receiving while also recording seven tackles and an interception.

Charles Brown Jr., Pittsburg RB: Brown ran for 223 yards and two touchdowns, and caught for 42 yards and a TD in a 42-20 win against Valley Christian.

Damian Escarcega, Windsor RB/LB: Escarcega dominated in a 50-20 win against Montgomery, running for 257 yards and four touchdowns and also snagging an interception.

Jadyn Marshall, St. Mary’s (Stockton) WR/RB: Marshall led the Rams to a 38-10 win against St. Ignatius with 162 yards and two touchdowns rushing to go with over 100 receiving yards.

Cheveyo Marquez, Bishop Union WR/LB: Marquez anchored the Broncos’ defense with a pick-six, another interception, and seven tackles, and also had a receiving touchdown.

Jalen Moss, Menlo-Atherton WR/DB: Moss caught for 124 yards and three touchdowns in a 34-0 rout of Pleasant Valley. He also recorded an interception, a tackle for loss, and over 50 PR/KR yards.

Lukas Habelt, Burlingame RB: Habelt ran for 112 yards and scored Burlingame’s only touchdowns (one rushing, one receiving) in a 17-7 victory against Sacred Heart Cathedral Prep.

Makoa Ah Too, Hillsdale RB: Ah Tou ran for 163 yards and four touchdowns in a 42-0 blowout of El Camino.

Troy Brucie, Sutter RB: In a 56-14 rout of Arcata, Brucie ran for 111 yards and two touchdowns on just seven carries, and also had a 23-yard touchdown catch.

Demarreya Lewis-Cooper, Enterprise QB/CB: Lewis-Cooper helped lead the Hornets to a 42-28 win against Paradise with 167 yards and three touchdowns passing on 8-11 completion to go with 163 rushing yards and a TD run. He also made three tackles, broke up a pass, and forced a fumble.

Jahari Johnson, Enterprise WR/DB: Johnson caught for 67 yards and a touchdown, returned a punt 75 yards for a touchdown, made seven tackles, and grabbed a pick.

Trey Hughes, Red Bluff RB: Hughes went off for 238 yards and three touchdowns on the ground in a 35-13 victory against Corning.

Justice Madsen, Winters RB/LB: Madsen ran for 136 yards and three touchdowns in a 48-27 win versus Rio Vista, and added five tackles and a TFL.

Jake Calcagno, California WR: Calcagno caught for 105 yards and four touchdowns as the Grizzlies put up 70 in a win against Freedom.

Santino Acevedo, Cardinal Newman RB/LB: Acevedo led the Cardinals to a 36-29 win over Vintage with 159 rushing yards, three rushing touchdowns, and eight tackles (one for loss).

Luke Souza, Acalanes QB: Souza erupted for 316 yards and five touchdowns passing on 14-16 completion in a 56-0 trouncing of Balboa.

Dante Antonini, St. Vincent de Paul LB/SS/WR: Antonini amassed 20 tackles, including two TFLS, in a 14-13 win against St. Helena. He also ran for a touchdown and finished with over 100 yards of total offense.

Henry Ellis, Petaluma QB: Ellis led the Trojans to a 54-7 rout of Piner with 64 yards and two touchdowns passing on 4-6 completion to go with 141 yards and three TDs rushing.

Kenny Lueth, Rocklin QB: Lueth threw for four touchdowns and over 300 yards in a 43-14 win against Capital Christian. He also ran for a touchdown.

Blake Nichelson, Manteca RB: Nichelson ran for 239 yards and four touchdowns and also caught for 41 yards and a touchdown to lead the Buffaloes over Turlock 44-36.

Brandon Seetahal, Antelope WR/DB: Seetahal helped the Titans to a 56-7 clubbing of River City with three touchdown catches, over 100 receiving yards, and a pick-six.

Johnny Bauser, Lincoln (Lincoln) QB: Bauser completed 18 of 24 passes for 280 yards and three TDs in a 51-7 domination of Roseville.

Derek Taylor, Hilmar TE/WR: Taylor caught for 119 yards and two touchdowns in a 28-21 victory against Sonora.

Isaiah Bickham, Sheldon RB/WR/DB: Bickham ran for 194 yards and three touchdowns in a 39-13 win against Laguna Creek, and also recorded a pick.