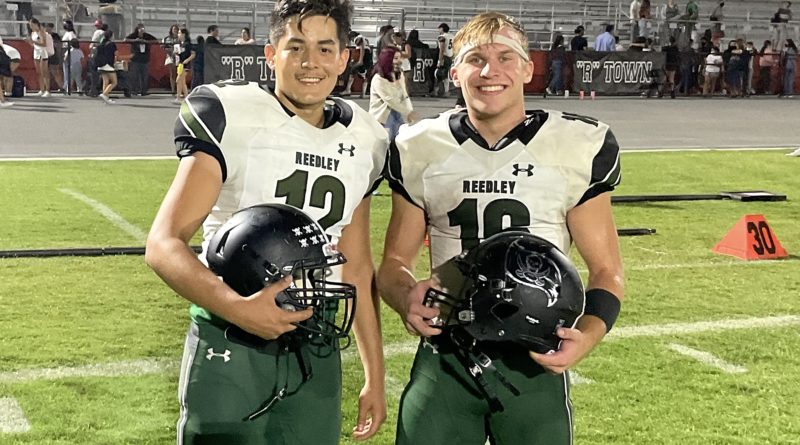 The win snapped Reedley’s three-game losing streak to Selma as they had been outscored 122-21 in their previous three meetings. It was the 90th meeting between the two football programs and their first matchup since 2017.

Reedley (4-0) recovered an onside kick to start the game but didn’t get its offense rolling until the second quarter when Warkentin rumbled in for his first touchdown to give the Pirates a 7-0 lead. That turned out to be the only TD of the first half.

Selma got on the board in the third quarter on a 30-yard field goal from Danny Ramirez to make it 7-3.

Reedley answered right back as Warkentin capped off a drive with his second touchdown of the game, this one a one-yard run, to give the Pirates a 14-3 third-quarter lead.

Selma didn’t go away, though, mounting a touchdown drive to close the gap to 14-10 after three quarters of play.

The Pirates dominated the fourth quarter, turning to Rocha to lead the way as he threw a 38-yard touchdown pass then put the game away with a 15-yard TD run on a read-option to make it 27-10.

Reedley head coach Tony Gates talked about the play of his team after the game. “It was a combined effort of a lot of kids,” Gates said. “Playing this Selma Wing-T offense is like dying a slow death. I told the boys to just keep playing and hang in there. We didn’t do our defense any favors with some of the field position that we gave them, but they came through for us.”

“I was really nervous,” Gates said when asked about his team’s preparation for the game, “Coach (Matt) Logue is a fantastic, great defensive coach. The Wing-T presents so many challenges, so we didn’t even practice with a ball this week, it was all about alignment and making sure we were in the right spots. We only had one game of film to evaluate them, so I knew that it was going to be a good matchup for us.”

The Pirates will head into a bye week to prepare for their North Yosemite League opener against the Patriots from Hoover High School on Oct. 1.

Selma (0-2) will be back at home next Friday night to take on Hoover before starting Central Sequoia league play in October.