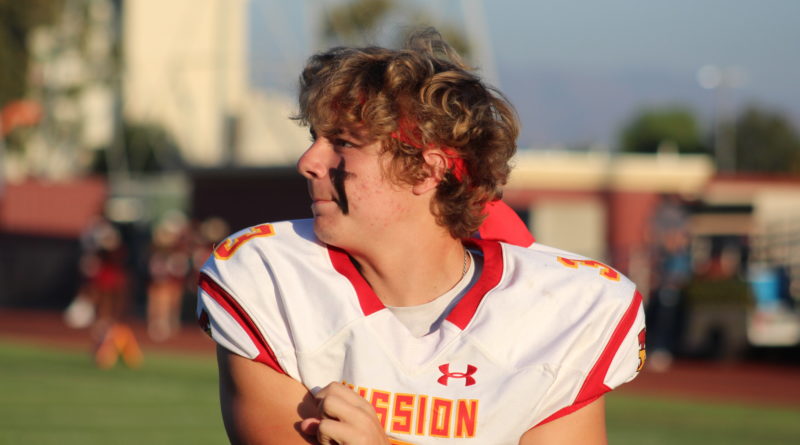 MISSION HILLS, CALIF. — Mission Viejo (3-1) head coach Chad Johnson thought his team would be outmatched on Friday when they traveled to the San Fernando Valley to take on Alemany (1-3).

“On paper, they blow us out of the water,” he said.

Instead, the Diablos played their most complete game of the season and won 30-7. Below are three takeaways.

Mission Viejo junior quarterback Kadin Semonza completed 14 of 20 passes for 280 yards and four touchdowns. He hit KJ Reed for a 45-yard gain on the Diablos’ second drive and then again for a 31-yard TD a few plays later. At the half, Mission Viejo led 9-0. In the third quarter, Semonza connected with Reed again for a 39-yard score. Later in the third, he tossed a 21-yard touchdown pass to Jackson Holman to increase Mission Viejo’s lead to 23-0. In the fourth quarter, Semonza threw his fourth and final touchdown pass to sophomore running back Chase Valousky. It went for nine yards.

Semonza received an offer from Nevada earlier this week. He’s had a strong start to the season, but showed humility postgame.

‘NO NAME’ DEFENSE COMES UP BIG FOR DIABLOS

Mission Viejo only returned one defensive starter from their team in the spring (senior safety Ruben Lopez) and overall the unit hasn’t received much recruiting interest. That may change soon though if the Diablos continue to play like they did on Friday. Mission Viejo shutout Alemany until midway through the fourth quarter.

“We have a bunch of no-name guys on defense that play together really well and just get after people and I could not be more happy for that group,” Johnson said. “Offensively we finally gave our defense some run support. Our defense feels like Randy Johnson half the time, up 1-0 in the ninth inning. Finally we gave them some run support and it was a good win for us.”

The best play of the night for Mission Viejo’s defense came on the last play of the first half when Alemany senior Dylan Gebbia threw a short pass to USC commit Kevin Green as time expired. Green caught the ball on the right side of the field and reversed fields all the way to the left sideline. For a few seconds it looked like he may break loose for a touchdown, but the Alemany defenders stayed composed, didn’t completely bite on the field reversal and forced Green to lateral the ball to a teammate who was quickly tackled.

Rhys Chappell as well as a few other Diablos made the tackle to end the half. The group is disciplined, physical and tough to play against.

Alemany head coach Casey Clausen said before the game that he wanted to see improvement from quarterbacks Another Wolter and Gebbia. “They’ve got a lot around them,” he said.

He left the field on Friday disappointed.

“That wasn’t good enough,” Clausen said. “The key to us on offense is tempo and getting our reads right. We want to get in a rhythm. Unfortunately against the three better teams we’ve played, we’ve showed we aren’t there yet…We’ll go onto the practice field and get better.”