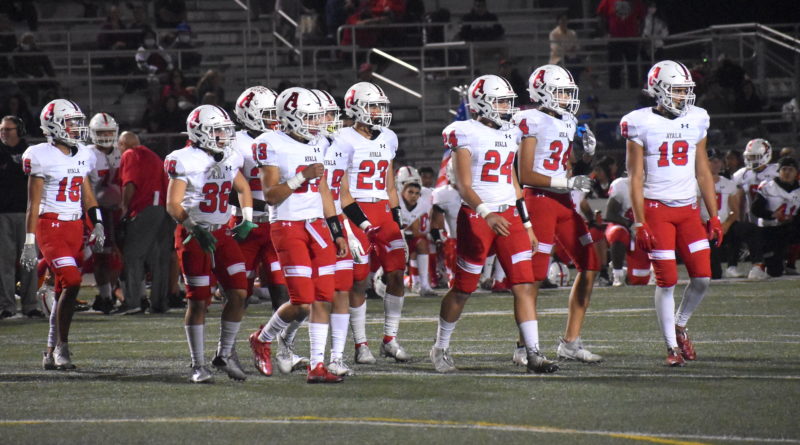 TUSTIN, Calif. – The Ayala Bulldogs moved to 5-0 for the third straight season with a dominant 42-7 win at Tustin on Thursday. Despite a solid effort from the Tillers, Ayala was in control from start to finish, and eventually put a running clock on its opponent.

The Bulldogs came out swinging on both sides of the ball, and it was clear from early on that they were not going to be denied. They led 14-0 after one quarter on two touchdowns scored by WR Drew Merrill, first by recovering a fumble in the end zone and second by taking a short pass 87 yards to the house in dazzling fashion. Then, a long touchdown catch by Dom Alloway five minutes into the second quarter made it 21-0, and Ayala would lead 28-0 soon thereafter. Even though Tustin picked up its play substantially from late in the second quarter onward, a Tillers comeback just never seemed like a possibility.

Ayala sophomore QB Bryan Wilson has been one of the Southern Section’s top breakout names since football resumed in March, but this may have been his best performance yet. He threw for 289 yards and three touchdowns on 12-18 completion, and also ran for a touchdown. Several of his completions came on perfectly-timed heaves to a receiver in coverage. The 6-0, 190-pound signal caller already picked up his first offer from Florida State since the season started a month ago, but he’s getting better by the week.

AYALA SHOWS OUT ON BOTH SIDES AS A UNIT

Wilson wasn’t the only Bulldog to shine – the whole squad appeared to be in midseason form as a cohesive group on both sides, with no shortage of highlights.

In addition to Wilson, Merrill, and Alloway, CJ Sento rushed for a touchdown, and Sam Moran and Boston Wilson both had impressive grabs, with Wilson’s coming for a touchdown. RB Eddie Huerta didn’t officially find the end zone, but he had some nice runs in limited opportunities, particularly an outstanding would-be touchdown run that got waved back due to a penalty. Ayala’s large, imposing offensive line thoroughly outmatched a strong Tustin D-line, excelling on all fronts but particularly with pass protection.

“The defense can’t plan for [our receivers] when we have so many guys who are putting in all this work,” said Wilson. On his O-Line, he said, “They’re the best. They just always assert their will, and that’s just amazing to play with. They don’t always get the praise, but they never have a bad game.”

The Bulldogs were just as impressive on defense, holding a good offense to just seven points. Ayala’s defensive front gave QB Tobey Schmidt and co. no room to work, and their LBs and DBs swarmed to shut down just about every Tustin reception. Marquis Monroe had a great diving pick in the fourth quarter, in addition to one catch and one run on offense that both set up Ayala TDs.

Ayala has now won 21 straight regular season games going back to 2018, and moved to 10-0 in the calendar year 2021 after going 5-0 in the spring season. There are a lot of seniors on the team who are in major roles for the first time but were key reserves in their last one or two seasons, and that group has the chance to finish high school unbeaten in their last three regular seasons. Not to mention that if Ayala wins out for the rest of the regular season, the Bulldogs will enter the playoffs having won 21 of their last 22 total games.

“I always say the best win is the next win,” said Wilson. “We want to win all of our games and be in Division 2. We think we’re one of the better teams in California, and we want a chance to prove that… we’re just going to take it game by game.”

While the outcome was clear well before the first half was over, the game was generally more competitive than the score would indicate. The Tillers got outclassed by a dominant team, but didn’t crumble or stop battling. They had to go essentially the whole field for their lone touchdown drive late in the second quarter, and Schmidt led an impressive march to the end zone he capped off with a touchdown run. That means they played Ayala down to just a 14-7 deficit in the last 26 minutes of the game.

Both of these teams’ best attribute on the field, arguably, is each’s well-roundedness. So, Tustin didn’t have any clear advantage with which to establish itself in this one. However, even going against a powerhouse, there wasn’t any one part of the game or field where they got outright exposed or embarrassed. Cutting down on untimely turnovers would’ve been the quickest fix to keeping this game more competitive.

Looking ahead to the playoffs, Ayala is on pace to finish comfortably inside the CIFSS’ Division 2. The Tillers are still 3-2 with three quality wins, and they stand to finish at worst 6-4 if they keep up this solid level of play. An undefeated league title run and 8-2 finish is absolutely within striking distance. So, if Tustin stays healthy, it projects as a solid Division 4-6 playoff team that has all the tools to succeed in the postseason.