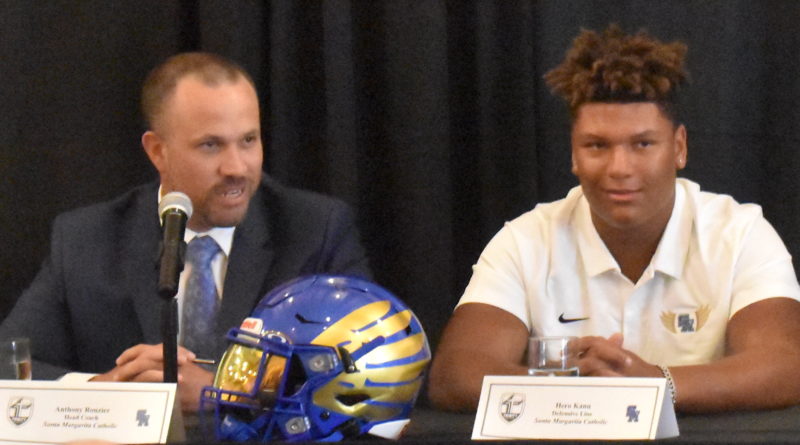 It feels like football season just started up again, but Week Zero, Week One, Week Two, and Week Three have already passed. Here’s a look at the Top 10 Southern California high school football games to watch this week (Sept. 16-18) in Week Four of the California season.

After Buchanan fell 34-31 to Los Alamitos last week, Liberty has one of the only remaining chances left for the Central Section to register a big win against the Southern Section before playoff time. The Patriots are additionally looking to bounce back after a one-point loss to Clayton Valley Charter in the Honor Bowl after starting the season with three dominant wins. But they’ll be the underdog at Chaminade on Friday, as the Eagles already have lopsided wins against Oaks Christian, Birmingham, and Crespi.

It’s no secret that the Jackrabbits haven’t gotten off to nearly the start they envisioned. Coming into the season with enormous expectations, they’ve lost by one point to Serra (Gardena) and by 27 to Mission Viejo before defeating Leuzinger 35-21 last week. So on paper, it’s hard to make a case for them to have a chance against a Centennial squad that has beaten Cathedral Catholic, Sierra Canyon, and JSerra by a combined 140-28. But Poly has way too much talent not to eventually shake off this slow start, and if everything clicks for them while Cen10 comes in sleeping on them, this could turn into a massive upset.

Also making this battle intriguing is that it’s between two of the more decorated public school programs in not only SoCal, but the country, who have rarely played each other in recent years. Both programs play with a lot of local pride, as the Huskies and Jackrabbits are known for putting on for the Inland Empire and Long Beach, respectively.

Helix was a major underdog coming into last week against Cathedral Catholic, but not many people expected the Highlanders to lose 52-0. Still, they already have good wins against Mira Mesa and Otay Ranch, and will be something of a favorite to bounce back this week against St. Augustine before their non-league schedule gets even harder. The Saints are coming off a nice shutout win against Steele Canyon after dropping their first three games of the season to quality opponents.

The 2019 national champion against a nationally-ranked out-of-state team – you know the drill. St. John Bosco is the massive favorite, even though Oscar Smith is at least a top-50 team in the country. The Braves beat Miami Central, ranked 15th in the country, 35-12, and last week beat Illinois powerhouse East St. Louis 42-26 in a game that mostly wasn’t as close as the score indicated. Still, it’s possible that the top-ranked team in Virginia gives Bosco its biggest test yet, and if the Braves aren’t up for it on the road, their national title hopes could take a huge hit this week.

It’s time to find out what this year’s Trailblazers team is made of. There’s no question that they’re one of the better teams in SoCal, if not the whole West Coast. But how they perform against a national top-15 team in Servite – a team they could potentially face in the first round of the Division 1 playoffs – should be telling, especially having had two weeks to think about their 35-14 loss to Centennial. Sierra Canyon comes into this as a pretty heavy underdog.

As for the Friars, they’ll be favored to pick up the win, but things will get testy very quickly if they have their first off-night of the season against their biggest test yet. Should they pull out the win, this will be arguably their most remarkable win of the C/O 2022’s era.

After a 3-0 start, the Tritons got their first loss of the season last week against Corona del Mar in a 7-3 grinder. San Clemente has one of the best defenses in the business as usual, but has only scored 26 points in its last three games. Now they face another Sunset League heavyweight that may well be their biggest test yet, 2-2 Edison. The Chargers have dropped two games against Trinity League teams, including a near-win against Orange Lutheran, but have outclassed Clovis North and Palos Verdes.

The outcome won’t be extremely consequential in this one, as it’s non-league and both teams are on pace to make Division 2 with ease regardless of who wins. That said, you can bet that both these teams are ravenous for a signature win. It’s impossible not to overuse that cliche when discussing pre-league matchups, but it’s as true as ever between two of the section’s most established public school powerhouses from the same county.

Avocado League is already entering its second week, and Carlsbad comes in as a pretty significant favorite. The 4-0 Lancers dominated a few solid Southern Section teams to start the season, but weren’t particularly convincing in their league-opener last week, a 28-14 win against El Camino. Many consider Mission Hills their biggest threat in league play, and the Grizzlies are off to a strong 3-1 start despite a 30-13 loss to Lincoln (San Diego). That means there’s a reasonable chance that the title match is upon us this Friday, so if Mission Hills can give Carlsbad a run for its money, this might be the best game of the week.

Mission Viejo, coming off a bye-week, recently bounced back from a thrashing at the hands of Servite to beat Long Beach Poly 41-14. The Diablos also have a strong win over Apple Valley, but are likely very hungry to get their biggest statement win yet this season. Alemany gives them the opportunity to do exactly that, but the Warriors might be even hungrier, having lost in respectable fashion against St. John Bosco and Utah power Lone Peak before getting their first win last week against Oaks Christian.

Both of these teams have big ambitions, but this is an absolute must-win to remain in contention for a CIFSS Division 1 birth. Aside from that, it should be one heck of a game between two excellent teams that have been ranked right on top of each other this season.

These teams have been neck-and-neck in the upper ranks of Southern Section and Orange County rankings since football restarted in the spring. Finally, we get to see them go at it.

With 5-star juniors QB Malachi Nelson and WR/DB Makai Lemon running the show, Los Al is always exciting to watch. And the Griffins are coming off a signature win, a 34-31 victory at Buchanan. Like Los Al, SM is not only formidable, but fun to watch as well, with 3-star QB Jaxon Potter and 4-star DT Hero Kanu anchoring them on either end. Whether one, both, or neither of these teams end up in Division 1, this game will likely have a big fingerprint on the matter, and should be an outstanding battle either way.