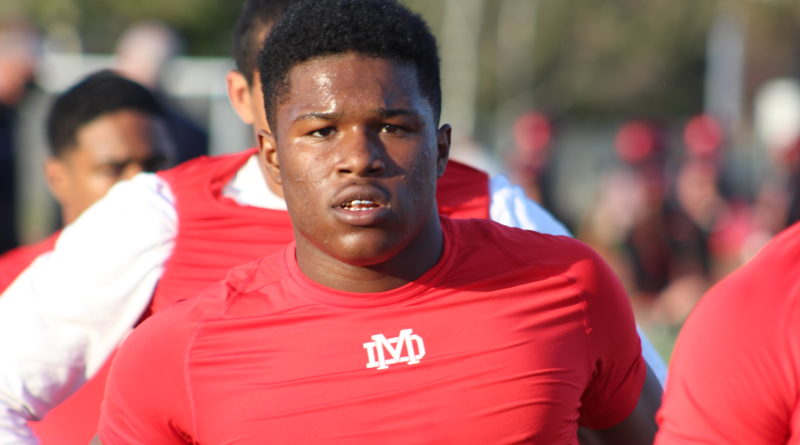 California high school football is known for putting out elite quarterbacks and wide receivers, but the Golden State also has an abundance of talent at running back every year. And 2021 features one of the best groups of top-end RBs California has had in years.

The main criteria for our Top 50 running back rankings are statistics relative to team success (on offense) and strength of schedule from the 2019, 2020-21, and fall 2021 high school seasons. Since this is not a recruiting ranking, players’ national rankings or college offers were not primary criteria, but they were taken into account.

If your favorite player is off to a great start but didn’t make the cut, don’t worry. We will have our eyes out for the best players in the state all season long, and put out updated rankings numerous times throughout the season. You can email lance@scorebooklive.com with statistics to nominate a player we didn’t include, and we will consider them going forward.

CAST YOUR VOTE: WHO’S THE BEST RB IN CALIFORNIA?

A 3-star prospect with eight D-1 offers, Burnett ran for 11 touchdowns and over 1,000 yards as a sophomore at Capital Christian. In two games as a senior, he’s run for 269 yards and two touchdowns.

Previously at St. John Bosco, Osborne is a 3-star prospect with four offers including Kansas and Arizona State. He’s in a great situation to break out statistically at Los Al, where he’ll be surrounded by one of the top passing attacks in the country for the next two seasons.

Through three games as a junior, Cortes is arguably the biggest breakout skill position player in the state. In Cen10’s first two games, he ran for 325 yards and four touchdowns on 10.8 yards per carry in wins over elite opponents in Cathedral Catholic and Sierra Canyon. At this rate, Cortes could very well finish the season as the top offensive producer on a top-five team in the state and top-25 team in the country – in which case he’d of course keep vaulting up the list.

A 3-star ATH with at least four D-1 offers including Kansas, Adimora is off to one of the best starts of any RB in the state. Through just three games, all wins, he’s run for over 600 yards and 15 touchdowns, and caught for 200 yards as well. If he can keep that going through a full season, his stock will continue rising exponentially.

A high 3-star prospect who has three Pac-12 offers but is still early in his rise, Robinson ran for a total of 275 yards and four touchdowns against Los Alamitos and Mission Hills in Lincoln’s last two games. He’s on pace to finish the season as one of the most widely recruited RBs in the state.

In six games as a junior in the spring, Crowther ran for 769 yards and 12 touchdowns and finished with over 1,200 all-purpose yards. He’s since been named a 3-star prospect and received double-digit D-1 offers. In one game so far as a senior, he ran for 160 yards and three touchdowns. While it doesn’t affect his ranking, Crowther also plays safety at a high level for the Falcons.

One of the state’s most underrated and productive running backs every season since 2019, Risley is primed for a huge senior year. He’s already run for 576 yards and eight touchdowns and caught for 90 yards and a touchdown in four games, all wins.

Canley was a standout RB as a sophomore, was one of the best in the Southern Section as a junior, and has been one of the very best in the state as a senior. In four games this season, the 3-star San Diego State commit has already run for 752 yards and 13 touchdowns on 12.7 yards per carry, and caught for 104 yards and a TD.

Roddy, a 3-star Army commit, is in his third wildly productive season at Chaparral, where he ran for 1,568 yards and 27 touchdowns in just nine total games as an underclassman. So far as a senior, he’s run for 443 yards and five touchdowns and caught for 57 yards and a touchdown in just three games.

Chalk ran for 1,431 yards and 20 touchdowns and caught for over 100 yards as a sophomore, and helped lead the Warriors to a tie atop the Mission League as a junior in the spring. A 3-star recruit with at least three D-1 offers, Chalk has already both run and caught for 100 yards and a touchdown in two games this season.

In four games for the impressive and unbeaten Lancers, Jackson has run for 336 yards and two touchdowns, and also leads the team with 245 yards and five touchdowns receiving so far this season. Jackson is a 3-star recruit, but based on the start to his senior season, he’s one of the most underrated offensive prospects out there.

Stanley, a 3-star prospect with multiple Power-5 offers, was the most productive offensive player in the City Section’s upper ranks in the spring. He’s already off to a great start this season with 217 yards and five touchdowns rushing in a season-opening win.

Through three games, Jones has already run for 271 yards and caught for 105, good for over 125 yards of offense a game. He’s a 3-star prospect but currently one of the most under-recruited RBs in the state, something that could change soon as he continues his stellar play as a senior.

Owens, a 3-star RB with seven offers, has already run for 588 yards and eight touchdowns through four games. As the top offensive playmaker on one of the better teams in the Southern Section, he could continue having a huge year and take another large jump as a Power-5 prospect.

Harden, a 3-star UCLA commit, led Narbonne in rushing touchdowns as a sophomore in 2019. He’s poised for a big senior season at Inglewood.

A high 3-star prospect with upwards of 17 offers, Thompson broke out as a sophomore at Calabasas, played his junior season at St. Bernard, and is now at Alemany. He’s off to a bit of a slow start with 189 yards and a touchdown rushing through three games, but is more likely to rise than fall on the list with the Warriors this season.

A high 3-star Arizona commit, Coleman enters his senior season with one of the more productive underclassman tenures of any RB in the state. He had 843 yards of offense as a freshman, 1,911 yards as a sophomore, and over 450 all-purpose yards in just two games as a junior. Put it all together, and he already had 2,452 rushing yards and 45 rushing touchdowns on over 10 yards per carry plus 717 yards and eight touchdown receiving in just 22 games before the Trojans even kicked this season off.

A 3-star San Diego State commit with double-digit offers, Garrison ran for 784 yards and 10 touchdowns in six spring games, and totaled over 1,000 yards of offense. In the Golden Knights’ fall debut, he ran for 362 yards and six touchdowns in a win against Mira Costa. And through two games, he’s also the team’s leading receiver. With a strong O-line and talent in the passing game around him, Garrison in a great situation to push for an even higher spot on the list this season.

Washington, a 3-star prospect, enters his senior season as one of the most underrated RBs in the state. He ran for 1,110 yards as a sophomore, totaled 1,242 all-purpose yards in just six games as a junior, and ran for 433 yards and six TDs in Helix’s two games this fall.

Sutton, a 3-star prospect with a handful of D-1 offers, ran for 721 yards and six touchdowns in just four games as a junior. He did it on an impressive 9.2 yards per carry, and also caught for 68 yards.

Even though the Braves almost never need either of them to rack up a lot of individual touches, Luke and Bates form one of the best one-two punches at running back that California has seen in the last few years. Both are in the vicinity of 5-7 with small but strong frames and elite speed, so Bosco’s offense thrives as they can switch off without losing anything at the position. They already have extremely similar production through three games apiece so far this season – Luke has run for 218 yards and a touchdown on 8.7 yards per carry, and also caught for 52 yards, and Bates has run for 229 yards and five touchdowns on 8.2 YPC, and also has a touchdown catch.

A 4-star ATH prospect with upwards of 10 D-1 offers, Mahasin enters his senior season as one of the premier RB/SBs in the state. He was named the Bay Area News Group Offensive Player of the Year in the spring for his 745 yards of offense, five rushing touchdowns, and five receiving touchdowns.

Ott, a 4-star Cal commit is back with the Cougars after two seasons at Bishop Gorman (NV). In just three games, he’s already run for 460 yards and seven touchdowns on 10.7 yards per carry. Ott has a great team around him on both sides of the ball at Norco, but is still needed to carry a significant playmaking load, making him a perfect candidate to compete for the top spot on the list as the year goes on.

A 5-star Oklahoma commit formerly at Edison (Stockton), Brown has been considered the best RB in the state by many for quite awhile now. He ran for 1,688 yards and 18 touchdowns and caught for 741 yards and nine TDs as a freshman in 2018, and had nearly 2,000 all-purpose yards as a sophomore.

Brown then transferred to Mater Dei, where he ran for 367 yards and five touchdowns and caught for 85 yards on the top-ranked team in the state, and arguable top team in the country. With numerous other RBs with elite talent in California touching the ball 25 times a game, it could be a challenge for him to get the usage necessary to stay at No. 1 – given that Mater Dei puts away nearly every challenger in the first half. But he’s off to the right start as a senior, having already run for 171 yards and five touchdowns in two games on over 12 yards per carry.