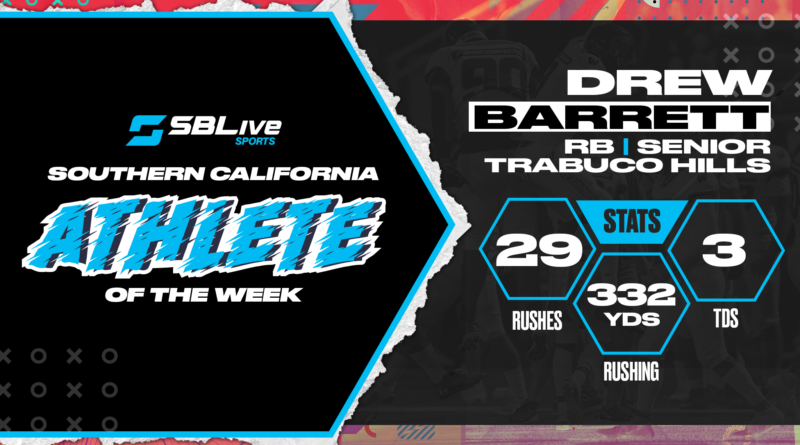 Congratulations to Trabuco Hills running back Drew Barrett for being voted SBLive’s Southern California High School Athlete of the Week for Aug. 30-Sep. 5!

The senior rushed 29 times for 322 yards and had three touchdowns against Dana Hills on Friday.

Barrett received 43.4% of the vote, beating out Vista Murrieta RB Gavin Galzote who finished second with 40.51%. JW North QB Jaidyn Gamble finished third with 4.78% and Serra WR Darrian Anderson finished fourth with 4.25%. There were over 100,000 votes tallied this week!

Cooper Whitton, Santa Fe Christian RB/DE: Whitton had six carries for 136 yards and three touchdowns to help the Eagles take down Francis Parker. He also had two tackles and a sack on defense.

Nico Iamaleava, Warren QB: Iamaleava passed for 350 yards and six touchdowns to help the Bears take down Grossmont 40-7 on Friday.

Omar Hammond, Patrick Henry DB/WR: Hammond returned an interception 100 yards for a touchdown, caught two passes for 65 yards and a touchdown and also added a 90-yard rush in the win for the Patriots.

Cole Robertson, San Clemente LB: Robertson had 14 tackles and a sack to help the Tritons take down La Costa Canyon 13-6 on the road.

Aaron Shebloski, Christian LB: Shebloski had eight tackles, an interception, and a sack to help the Patriots beat Mission Bay.

Tyler Kovalcin, Yorba Linda RB: Kovalcin ran for 112 yards and two touchdowns and also added an 85-yard kickoff return for a touchdown to take down Orange on Thursday.

Matthew Hodges, Elsinore TE/LB: Hodges caught five passes for 101 yards and two touchdowns on offense and made 11 tackles and recovered a fumble on defense.

Christian Kretz, Temecula Valley ATH: Kretz scored three touchdowns on Friday, once on the ground, once through the air, and once on an interception return.

Matthew Caldera, Vista Murrieta RB: Caldera rushed for 190 yards on 13 carries and had 2 rushing TDs, one for 74 yards, in Vista Murrieta’s victory over Tesoro.