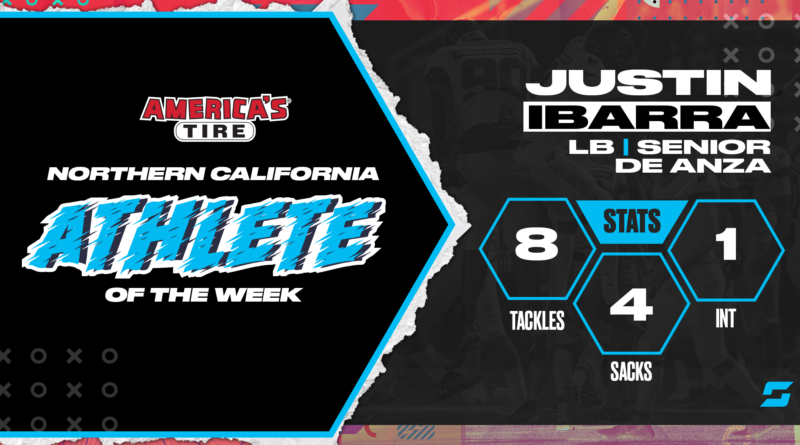 The senior helped lead the Dons to a 19-7 win against Moreau Catholic with eight tackles, four sacks, and an interception.

Jacob Porteous, Casa Grande QB: Porteous etched his name into the record books throwing for 647 yards and seven touchdowns in a 49-35 win against Maria Carrillo.

Tyler Tremain, Folsom QB: Tremain went off for 391 yards and five touchdowns passing in a 38-17 win against Pittsburg.

Charlie Knapp, Marin Catholic WR: In a 62-0 blowout of Concord, Knapp had a fumble recovery touchdown, a pick-six, and two touchdown catches – all in the first quarter.

Tyler Hoffman, San Ramon Valley DE/TE: Hoffman made 4.5 sacks and recovered a fumble in a 34-7 win over Bishop O’Dowd.

Chase Vehmeyer, Windsor QB: Vehmeyer led the Jags to a 42-13 win against Manteca throwing for 311 yards and two touchdowns on 12-14 completion, in addition to 66 yards and three touchdowns on the ground.

Makhi Johnson, Windsor WR/DB: Johnson caught for 182 yards and both TDs, and also recorded an interception.

Brandon Burns, Dublin LB/WR: Burns helped lead the Gaels to a 35-6 victory over Castro Valley with a pick-six, another interception, and 74 receiving yards including a touchdown catch.

Carter Abel, University Prep RB: Abel ran for three touchdowns and had a touchdown catch in a 41-0 trouncing of Corning. He totaled over 150 all-purpose yards.

Jake Boyd, Los Gatos QB: Boyd completed 10 of 17 passes for 147 yards and three touchdowns, and kicked a field goal in a 38-17 win against Liberty (Brentwood).

Jakson Berman, Valley Christian QB: Berman both threw and ran for a pair of touchdowns in a 40-19 win against Capital Christian.

Grant Foster, Orland QB/DB: Foster helped lead Orland to a 50-22 win against Wheatland with two rushing touchdowns, 10 tackles, a tackle for loss, a sack, and three kickoff returns for over 100 combined yards.

Kenny Lueth, Rocklin QB: Lueth only attempted five passes in a 69-8 stomping of Davis, but he completed all of them for four touchdowns and 149 yards.

Jackson Burleson, Christian Brothers RB: Burleson helped lead the Falcons to a 32-13 win versus Sheldon with 120 yards and three touchdowns rushing plus 90 yards and another TD receiving.

Blake Nicholsen, Manteca RB: Nicholsen ran for 173 yards, a touchdown, and two two-point conversions, and had a touchdown catch in a 46-19 victory against Cosumnes Oaks.

Tristan Risley, Clovis RB: Risley helped lead the Cougars to a 40-0 rout of Ridgeview with 155 yards and a touchdown rushing plus a receiving touchdown.

Sergio Beltran, Menlo School QB: Beltran led the Knights to a 49-12 win over King’s Academy with 263 yards and five touchdowns passing on a whopping 18-21 completion.

Aidan Williams, Leigh QB: Williams completed 23 of 30 passes for 265 yards and three TDs in a 41-0 blowout of Gilroy. He also ran for a touchdown.