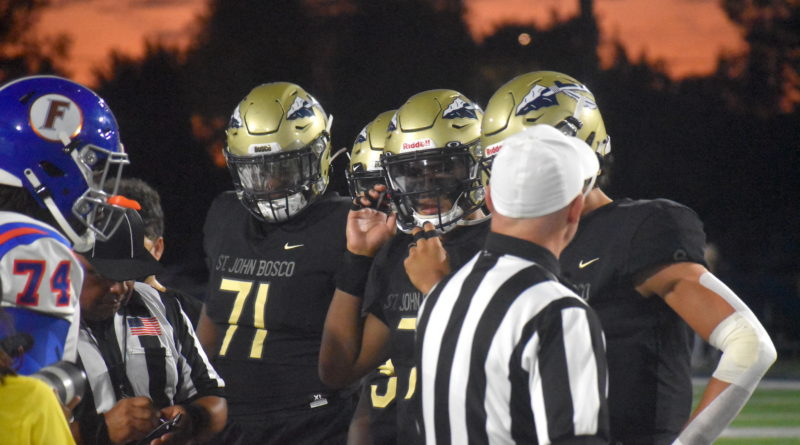 BELLFLOWER, Calif. – After more than a half of impeccable play against the top-ranked team in Illinois on Friday, St. John Bosco inexplicably came undone in the second half and nearly paid the price.

But the Braves still did enough to beat East St. Louis, led by 5-star WR Luther Burden III, 42-26 to move to 4-0. Here are three takeaways from the game:

2.5 QUARTERS OF BRAVES DOMINANCE – THEN A ‘MELTDOWN’

The Braves set the tone early on in this one, owning both sides of the ball until they held a 35-0 halfway through the third quarter.

Pierce Clarkson ran for two touchdowns in the second quarter, including one from over half the field. Chedon James also ran for a touchdown in the second quarter off a trick play, and then Rayshon Luke ran for a touchdown exactly a minute into the second half. A nice grab in coverage by Matayo Uiagalelei off a dime from Katin Houser with 6:35 left in the third quarter made it 35 for the Braves. 35 to a resounding zero for the Flyers, who were able to move the ball in the first quarter, but were dead in the water offensively afterwards, struggling significantly to move the ball.

After that, things got precarious for Bosco, even without any tactical changes impacting the game. A number of the Braves’ starters rested on the ensuing drive, and the Flyers didn’t have much trouble reaching the end zone thanks to a marvelous catch in coverage by Burden. Bosco had to punt quickly on its next drive, and Burden took the punt 66 yards to the house through a horde of defenders. Even then, it was 35-12 late in the third quarter, and the Braves were still in full command with their full first unit already back in.

The chains holding East St. Louis were off though. Burden would snag another touchdown through defense, and the Flyers also scored on a fumble that Leontre Bradford recovered and took to the end zone. They cut the lead to 35-26 in the fourth quarter, but Clarkson would effectively seal the game by connecting with Logan Booher for an 86-yard touchdown that made it 42-26. The Braves also turned East St. Louis over on downs with under a minute left in the game, at which point a touchdown, two-point conversion, and successful onside kick would’ve given the Flyers a real chance to finish the comeback.

“When you’re dealing with kids, sometimes they just don’t keep their composure, they don’t keep their focus,” said Braves head coach Jason Negro after the game. “You gotta give [East St. Louis] a lot of credit for coming back and continuing to fight, and we melted down in the second half.”

The Braves’ significant inability to regain momentum, particularly on defense, was confusing after such a dominant 2.5 quarters. While that’s certainly concerning, they of course still won, and the level they played at up until that point was so dominant that it shouldn’t be an afterthought. They played some of their best ball since 2019 for much of this game.

“Playing against top dogs, other top teams from [other] states – we’re not going to run away from it,” said Clarkson. “Anybody who wants to play, we’ll play. It definitely prepares us for league, and everything else we’re about to face.”

St. John Bosco also, as usual, benefitted from a strong night around the line of scrimmage. The Flyers were the first team they’ve faced this season – and one of very few in the country – who could match up with the Braves in terms of sheer size. Still, Bosco won in the trenches. They had a great showing from the O-line, and Uiagalelei, IDL Jairus Satele, and LB Jalen Woods led a disruptive, physical attack up front. For much of the game, the Braves’ secondary was phenomenal too. Sophomore CB Marcelles Williams spent the most time on Burden in man coverage, containing him for the whole first half with help from the rest of their strong back unit.

EAST ST. LOUIS CAN PLAY WITH ANYONE

The Flyers were able to have some impressive stretches on both sides of the ball against SJB, which even most other nationally elite programs can’t say after playing them. While the Braves’ D-line was effective in both the pass-rush and stuffing the run, the fact that East St. Louis’ playmakers at least had a bit of room to work says volumes about their offensive line. Burden was unstoppable for much of the second half even fighting some injuries against a defense geared up to stop him. And their defense became smothering against the perennial offensive juggernaut.