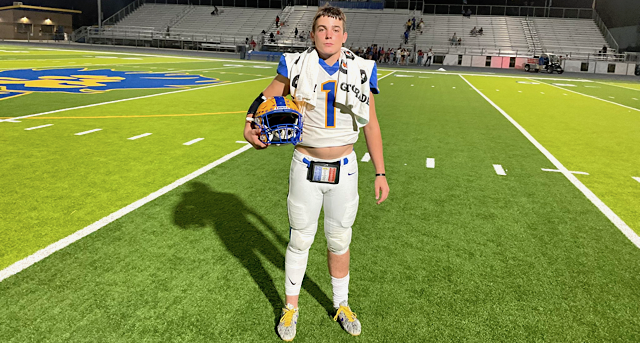 EXETER, Calif. – Coming in to Friday night’s game at Monarch Stadium between Dos Palos and Exeter, there was a lot of anticipation considering that the two teams were unbeaten.

Friday night was all Dos Palos though, as the Broncos took what was a close game for the majority of the first half and turned it into a 41-0 statement road win over the Monarchs.

“I could not ask for any more from my guys,” said Dos Palos head coach Rob Calvert. “We had a well-rounded attack on offense, defense, and special teams. We knew Exeter was a going to be a tough matchup. Did I think we were going to come out and hang 40 on them? No, but the guys played well and I couldn’t ask for anything else.”

With a 7-0 lead through the second quarter, Dos Palos doubled its lead on a 4-yard touchdown run by quarterback Trent Calvert as time expired in the first half.

Then, on the first play of the second half, Exeter quarterback Jake Rowlett was intercepted by Miguel Padeiro. The Broncos capitalized on the ensuing drive with Calvert’s third rushing TD of the game. For the game, Calvert scored four rushing touchdowns and added a 40-yard touchdown strike in the fourth quarter.

“Trent has always been a passer, and I also knew he could be a runner, but we never put the dual threat in until this year,” said coach Calvert. “It’s kinda paying off because guys are playing pass protection against us and now we’re able to run the ball with the running back and Trent. He’s a hard runner and can get those hard yards.”

For the Monarchs, they will look to get back in the win column as they will travel to Tulare and take on the Hawks from Mission Oak next week.

Meanwhile the Broncos will head back home where they get ready to face the Tribe from Chowchilla.

“We didn’t play a complete game in the first two games of the season – we kinda just played one good half,” said coach Calvert. “We gotta realize that when we play a full game, we’re pretty good. This is a great win, but that’s what it is – a great win. We’ve got Chowchilla next week, we’ve got a very tough league with Mendota, Firebaugh, and Coalinga coming up, so this game right here is a confidence builder moving forward.”