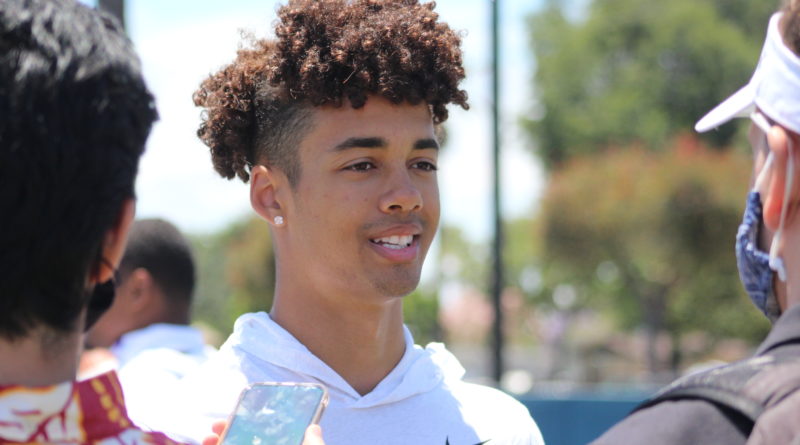 After rolling out our preseason top 50 California high school football teams, we now turn our attention to the best players in the state, position by position. First up: quarterbacks.

The main criteria for SBLive’s Top 20 quarterback rankings are film review, statistics from the 2021 spring season relative to team success (on offense), 2021 fall statistics so far and strength of schedule in both seasons. The rankings were compiled by SBLive reporter Connor Morrissette.

We also want your opinion: CAST YOUR VOTE for the best QB in the state.

Jackson is one of three sophomores to make the list. His tape is very impressive and he’s received scholarship offers from six schools including Arizona, Oregon State and Texas A&M.

Rashada is one of the top quarterbacks nationally in the 2023 class. In six varsity appearances, he’s completed 48 of 98 passes for 606 yards, eight touchdowns and five interceptions.

Lampkin makes plays with both his arms and legs. In Serra’s first game this season, he rushed for a 72-yard TD and also hit receiver Hassan Mahasin for a long TD. Lampkin’s received scholarship offers from Fresno State, Idaho and Illinois State.

Voss is committed to San Jose State. In the spring, he completed 78 of 129 passes for for 1,221 yards, eight TDs and three interceptions. He also rushed for two scores. In one game so far this fall, Voss threw for 272 yards, four TDs and also rushed for a touchdown.

Throckmorton is committed to Oregon State. In the spring, he completed 79 of 125 passes for 989 yards, 12 TDs and four interceptions. So far this fall, he’s completed 46 of 68 passes for 638 yards, seven touchdowns and two interceptions.

Against some of the state’s best competition, Crum has some of the best numbers of any QB on this list. Last season against Corona Centennial, he threw two touchdowns and rushed for a third in a 38-36 win. In eight varsity starts, Crum has thrown for 2,091 yards, 22 touchdowns and only three picks. He’s also rushed for 418 yards and nine TDs.

Rose is also committed to Utah. He had an impressive junior spring completing 95 of 136 passes for 1,415 yards, 11 TDs and one interception. So far this fall, he’s completed 61% of his passes and thrown four TDs in two games.

Denegal is committed to Michigan. He had a fantastic spring completing 57 of 91 passes for 803 yards, 11 TDs and zero interceptions. So far this fall, Apple Valley has scheduled up and Denegal has struggled a bit throwing two TDs and four picks in three games. He has rushed for three TDs though.

Sayin is one of the top prospects in the 2024 class. He’s received scholarship offers from some of the best schools in America including Georgia, Notre Dame and USC. Through three games as the Carlsbad starter, he’s completed 35 of 56 passes for 673 yards, eight TDs and two picks. The Lancers are 3-0.

Stratton is committed to Washington. As a junior and senior, he’s thrown for 2,396 yards, 33 touchdowns and three picks in eight games.

Houser is committed to Michigan State. In the spring splitting time under center with Pierce Clarkson, he threw for 643 yards, seven touchdowns and two picks. He also rushed for a touchdown. This fall, he’s completed 20 of 30 passes for 283, a touchdown and an interception.

Martin is committed to Cal. He threw 13 touchdowns in the spring. This fall in a 29-26 win against a good Loyola team, he completed 21 of 30 passes for 338 yards and a touchdown.

Clarkson completed 34 of 52 passes for 645 yards and 10 TDs in the spring splitting time with Houser. He also carried the ball 37 times for 217 yards and one touchdown. So far this fall, Clarkson has completed 11 of 21 passes for 158 yards and four TDs. When the lights have been brightest, Clarkson has been solid. He threw a touchdown last season against Mater Dei and this fall against Miami Central he completed 7 of 10 passes for 121 yards and three TDs. He also hasn’t thrown an interception as a varsity player.

Murphy is committed to Texas. In three seasons of varsity action (14 games*), he’s thrown for 2,871 yards 15 touchdowns and ten interceptions. He’s rushed for two TDs as a senior as well.

*Murphy was not a starter as a sophomore

In six varsity starts, Brown has been nothing short of spectacular. In five games as a freshman, he completed 74 of 107 passes for 973 yards, 15 TDs and one INT. He also rushed for one TD. In his lone game as a sophomore so far, Brown completed 18 of 23 passes for 264 yards and three TDs against Texas power Duncanville.

Iamaleava is another top 2023 recruit. In his two years at Warren he’s put up eye-popping numbers. In seven games, he’s thrown for 1,870 yards, 35 touchdowns and just one interception.

Fifita has been one of the top quarterbacks in the vaunted Trinity League for three seasons now. In those three years the Arizona commit has thrown for 4,758 yards, 54 touchdowns and eight interceptions.

Nelson is the top quarterback in California. He’s committed to Oklahoma. In the spring, he completed 73% of his passes for 1,513 yards and 23 TDs. His six-game output earned him the Gatorade State Player of the Year honor.

We also want your opinion: CAST YOUR VOTE for the best QB in the state.