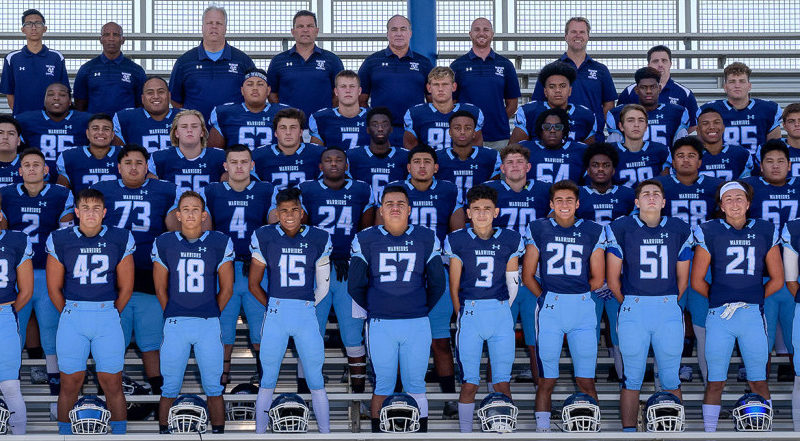 Three weeks of NorCal high school football have already past, but many of the best teams are just getting started. Weeks Zero, One, and Two have come and gone, which means this is Week Three. Here’s a look at the top Northern California games in Week Three (Sep. 9-11).

It’s no secret that this could be one of the physically-imposing Lancers’ best teams in a long time, and they’re off to a great start with a 55-0 rout of Oak Grove. Is anyone giving them a chance against De La Salle, which has blown out St. Mary’s (Stockton) and Monterey Trail so far? Probably not, but since Saint Francis is an underdog championship threat in the Central Coast Section, this game had to squeak into our top 10.

A lot of Sac-Joaquin Section Division 2 championship contenders have big games this week, starting with this one. Both these squads are off to similar starts, as each began the season 2-0 with a blowout win against Davis, but have each dropped their last game against quality teams they probably expected to beat. Granite Bay fell 28-14 against Jesuit in a potential playoff preview, and Vacaville was upset 17-10 by a Cardinal Newman squad that is still formidable but going through something of a rebuilding period. Both should be ready to bring their A-game with playoff seeding on the line in this one.

Both of these teams could be in the midst of one of their best seasons in recent history, and one of them will pick up another big win on Thursday. The Raiders are a CIFSJS Division 2 contender, and have to be riding high after breaking through against St. Mary’s (Stockton) last week. Meanwhile, SRV is a major favorite in Division 2 of the NCS, and also notched a statement win last week beating Bishop O’Dowd 34-7.

The Rams played an outstanding half of football to start the season, and have struggled in the three since then. They came out swinging against De La Salle in their opener, but lost the second half 35-0, and then fell 41-27 against Central Catholic last week in something of an upset. Still, St. Mary’s has tons of opportunities to right the ship against quality opponents throughout the season, but they face yet another strong test against SI. The Wildcats have already beaten Palo Alto and Sacred Heart Prep in defense-oriented games, and if they can get some early scores but still control the pace on Saturday, they’ll have a shot at an even bigger win. The odds are strong that they’ll get St. Mary’s best though.

Other than Jesuit’s harmless blowout loss against Folsom to start the season, both of these CIFSJS non-Division 1 heavyweights are off to strong starts. The Marauders of Division 2 bounced back the following week to beat Granite Bay, and arguable Division 3 favorite Christian Brothers has strong wins over Burbank and Sheldon so far. Jesuit is the favorite here, but either team could come out of it with a signature win.

Based on the year the Vikings are having so far, this week they have a chance to break through for what would be one of their biggest regular season wins in recent memory. After big wins against Sac-Joaquin Section foes Lincoln (Stockton) and Grant, plus a shutout of Lodi, some actually have them ranked above the Fresno powerhouse. Central isn’t the defensive juggernaut it was during its recent state championship era, but the Grizzlies are still a major TRAC and CIFCS Division 1 title championship threat. And through two wins against Bullard and Bakersfield, they’ve put up 110 points. Edison should be viewed as the clear underdog here, but Central can’t afford to sleep on them.

It’s only Week 3, but the PCAL game of the year might already be upon us. Both of these squads are off to excellent 2-0 starts, as Aptos has already routed both Mills and Campolindo 49-0, and Palma has beaten WCAL teams Archbishop Mitty 47-0 and Sacred Heart Cathedral Prep 14-7. The hosting Mariners are the favorite here, but expect these squads to put on a show with their league title hopes on the line.

Not long ago – the last regular California high school season, 2019 – these two teams went all the way in the top two divisions in the Sac-Joaquin Section. Since then, they haven’t played up to that same level. But both teams are still stacked, and looking to bounce back from tough losses against underrated opponents last time out. Elk Grove lost 15-6 against Inderkum on Aug. 20 and hasn’t been in action since, whereas Oak Grove fell 17-10 on Aug. 27 against Vacaville after a blowout win against Vacaville. Don’t be surprised to see one or both of these squads have a breakout game.

Great battles between the elites from the Southern and Central Sections are common in the state playoffs, but having a duel like this in September is a rare treat. Buchanan is the reigning Tri-Rivers Athletic Conference champion, and would’ve been the top seed in CIFCS Division 1 had there been a postseason last season. So far, the Bears have beaten Kingsburg, Bullard, and Paso Robles by a combined 108-7. However, they’ll have their hands full hosting Malachi Nelson and the absolutely loaded Griffins, who are off to a great 3-0 start but are still yet to hit peak form. As far as Southern Section vs. Central Section showdowns go in the regular season, this is as good as it gets.

If it seems like every week, the top game on our list involves Pittsburg, that’s because it does. Unfortunately the Pirates’ season-opener against Serra in Week One was canceled due to fires/air quality. But after last week’s primetime battle against Folsom, which they lost 38-17, they continue with their outstanding preseason slate against another out-of-section NorCal elite: reigning/projected Central Coast Section Division 1 finalist Valley Christian.