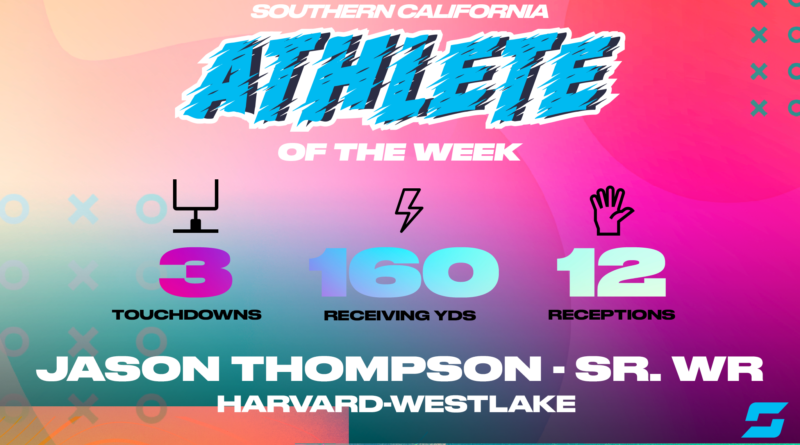 The senior caught 12 passes for 160 yards and three touchdowns to help beat Venice on Friday, Aug. 27.

Thompson received 47.61% of the vote, beating out Chaminade ATH Paul Holyfield who finished second with 28.08%. Kennedy (La Palma) WR Hunter Benton finished third with 20.05%. There were over 19,000 votes tallied this week!

Sophia Reavis, Laguna Beach volleyball: Reavis totaled 50 kills and 24 blocks in a win over Dana Hills and a loss to Foothill.

Jackson Stratton, La Jolla QB: The Washington commit passed for 470 yards and seven touchdowns in a one-point loss to Scripps Ranch on Friday.

Paulo Burak, Carlsbad RB: Burak showcased his skills on the ground and through the air on Friday. He finished with 284 total yards and three touchdowns.

Savigon Yokley, El Capitan QB: Yokley passed for 109 yards and a touchdown while utilizing his speed to rush for 147 yards and three touchdowns.

Camdan McWright, St. Genevieve RB: McWright had 205 rushing yards and two touchdowns on Friday while only carrying the ball 11 times.

Sione Manu, Kennedy ATH: Manu showcased his ability on both sides of ball, rushing for 165 yards and three touchdowns and also returning a fumble for a touchdown.

Emmanuel Barajas, Yucaipa RB/LB: Barajas posted his second straight game of over 250 yards rushing. He ran for 279 yards and had four touchdowns to lead the Thunderbirds over Silverado.

Adan Rodriguez, Maywood CES QB: Rodriguez did his damage on the ground, rushing for 303 yards and three touchdowns against Los Angeles.

Samuel Gbatu Jr., Temecula Valley WR/DB: Gbatu contributed all over the field on Friday night. He caught six passes for 154 yards and a touchdown, had two interceptions, and returned a kickoff 89 yards for a touchdown.

Maalik Murphy, Serra QB: Murphy had 341 passing yards and three touchdowns to go along with 34 rushing yards and another touchdown to help the Cavaliers beat Long Beach Poly by one point.

Dylan Hampsten, Saugus LB: Hampsten had seven tackles, 3.5 sacks, and forced a safety in the Centurions shutout win over Moorpark.