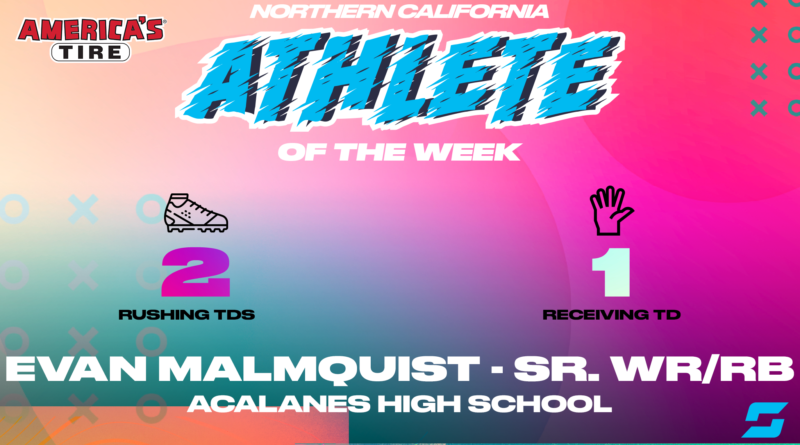 Malmquist, who lines up at running back and receiver, ran for two touchdowns – including a 51-yard scamper – and caught a 46-yard touchdown pass in a 59-6 rout of Sierra (Manteca).

McPherson tallied 27 kills, 11 digs and 9 aces to lead Chico to wins over West Park and Roseville.

Lara totaled 59 assists and 21 digs to lead Ripon Christian to wins over West and Tracy.

Dickey caught for 191 yards and three touchdowns, and also had an 85-yard KR touchdown.

Vehmeyer led Windsor to a 42-13 win against East Union that was called after three quarters due to poor air quality. He threw for two touchdowns and 280 yards, and ran for three touchdowns as well.

Johnson caught for two touchdowns and 186 yards, and also had an interception.

In a 27-20 loss against Fortuna, Parlett ran for 279 yards and three touchdowns on just 16 carries, and also had a recovered fumble and blocked PAT.

Barber ran for two touchdowns and 129 yards on just eight carries in a 52-16 win against St. Mary’s (Stockton).

Risley ran for 193 yards and three touchdowns and had two catches for 34 yards in a 34-14 victory against Bakersfield.

Pfaff ran for 207 yards and four touchdowns in a 56-41 upset of Menlo-Atherton.

Smith threw for 146 yards and a touchdown, and also ran for two touchdowns and 135 yards.

Despite the loss, Earby caught for 199 yards and two touchdowns, and also had an interception.

Mascheroni caught for three touchdowns and over 200 yards in a 56-21 win versus Newark Memorial.

Brown-Sanger led the Cougars to a 26-24 win over Mountain House with 177 rushing yards and a rushing TD on just 13 carries. He also completed four of eight passes for 75 yards and a touchdown.

Despite the loss, Brooks completed 17 of 22 passes for 347 yards, three touchdowns, and zero interceptions. Roy Gardner and Dexter Francis III both had big nights receiving the ball.

Rozevink helped lead the Cougars to a 41-0 trouncing of Calaveras by throwing for 174 yards and four TDs on 10-17 completion.

The sophomore scored in multiple ways, racking up rushing (21-yd), receiving (29-yd), and fumble recovery (30-yd) touchdowns to go along with multiple tackles from his strong safety position.

Olivera helped lead the Eagles to a 35-0 blowout of Fowler with 133 yards and three touchdowns rushing in addition to seven tackles (one for loss).