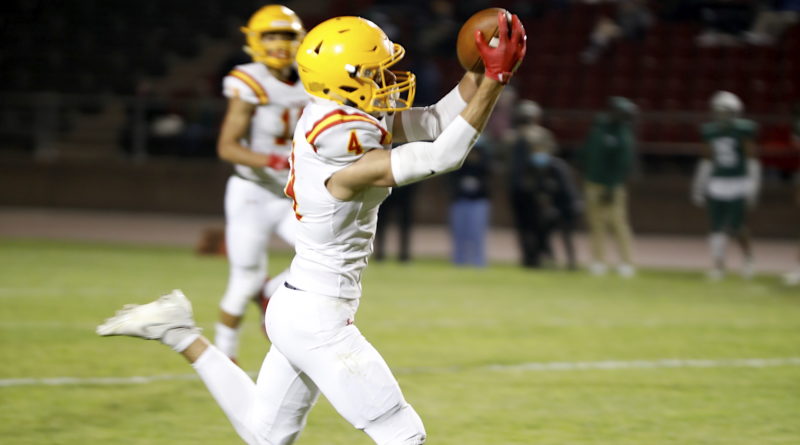 BOTH TEAMS COMING OFF BIG WINS

Both Palma and SHC were coming off energizing wins. Last week, SHC torched Sacred Heart Prep (Atherton) on the ground (over 300 yards rushing), and Palma’s senior quarterback Luke Rossi rushed for four touchdowns against another WCAL opponent, Archbishop Mitty (San Jose), on their way to a 47-0 victory.

Rossi didn’t have as many offensive stats Friday night but “showed really good leadership” according to Palma head coach Jeff Carnazzo. “We were struggling early on,” said Carnazzo. “We struggled with our protection. We threw the ball a lot in the first half,” which was a sharp 180 from what brought Palma success last week.

The game started out with one of the Bay Area’s best young playmakers, Palma sophomore Logan Saldate, blowing up a quick toss from his spot at cornerback.

Sacred Heart converted two third-and-mediums on the first drive, but that drive, like most throughout the night, stalled. A flurry of punts filled the first half, mostly due to both defenses playing with their hair on fire.

Mike Hill, Sacred Heart’s offensive coordinator had game-planned a more balanced attack than their previous week, but said Palma was clearly ready for it. Hill cited a few instances where the Palma sideline called out Sacred Heart screens before they happened, and they also called out a reverse based off their offensive formation and pre-snap motion.

“We just didn’t connect on some throws, and had some bad drops at bad times,” Hill said. “They watched film. You can tell that they were well prepared.”

Sacred Heart’s zone running concept proved ineffective against a loaded box that Palma remained in for most of the night. But Palma couldn’t get anything going on offense until Carnazzo made a second-half adjustment.

“We saw a lot of film last week,” said Carnazzo. “We knew they had a lot of really good athletes and were formidable up front. So the game plan was to spread the field out, take advantage of the perimeter, and that wasn’t working very well. The fact of the matter is we were struggling early on. We were on our heels the whole first half, and I told the team at halftime ‘let’s be the aggressors in the second half’ and they did.”

After Carnazzo decided they were going to run at Sacred Heart instead of around them, he credited his team’s conditioning with their second half success.

“I think we wore them out,” said Carnazzo.

Palma scored their first touchdown on a 15-yard run right up the middle by J.C. Escutia in the third quarter to tie the game at 7-7. Palma quarterback Rossi cited that touchdown as the momentum swing they needed.

“Our defense really shut them down, and our O-line wore them down,” said Rossi.

The game-winning touchdown came on a 59-yard dime from Rossi to senior receiver JoJo Cardinale in the fourth quarter.

The first score of the game, and only score of the first half, came when Sacred Heart senior wide receiver Isaiah Keishk took a post route 60-plus yards to the house. That turned out to be SHC’s only points of the game.

“We had a couple big stops,” said Mixon. “We kept sacking the quarterback.”

MENA, FINLEY STAND OUT FOR PALMA

At defensive end, Finley garnered special attention from Sacred Heart blockers all night, but he still found a way to wreak havoc in the Irish backfield.