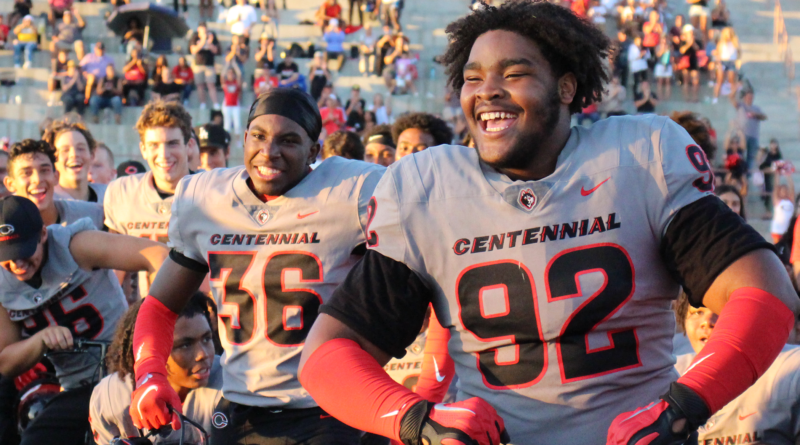 Here are four observations from the game:

Sierra Canyon scored on its first offensive possession when Trailblazers quarterback Daniel Duran hit Dominic Arango-Serna for a 15-yard touchdown. But in the remaining 39 minutes and 40 seconds of game time, Sierra Canyon’s offense didn’t score again with the exception of a successful two point conversion following a Carmel Crunk pick-six.

After going into the locker room tied 14-14 at halftime, Corona Centennial’s defense really turned it on in the third quarter. The Huskies allowed just one first down in the third and it was a self-inflicted wound: a 15-yard roughing the passer penalty. Sierra Canyon switched out Duran for sophomore quarterback Alonzo Contreras for two series in the quarter, but he met a similar fate of constant pressure in his face and struggled to engineer positive plays.

“Our defense played their butts off,” Corona Centennial head coach Matt Logan said. “We had a lot of mistakes on offense and they covered most of them.”

“We put it all together in the second half,” senior Notre Dame cornerback commit Jaden Mickey added.

CENTENNIAL HOT AND COLD ON OFFENSE

The Huskies put up 35 points on offense, but that unit made some mistakes as Logan alluded to. With 2:22 to play in the first half leading 14-6, Centennial’s defense forced a turnover on downs at their own 13-yard line. On their ensuing offensive possession, junior quarterback Izzy Carter threw a pick-six to Crunk, which tied the game. Carter also lost a fumble in the fourth quarter.

When asked if he ever considered going exclusively with junior Carson Conklin at quarterback (Conklin and Carter switch out every series), Logan’s response was brief.

“No,” he said. “That’s how you learn. We show these guys things and then when it comes out in a game it’s like, we’ve been telling you guys this for a couple weeks.”

Conklin threw an interception of his own in the game to Trailblazers senior Darryl West in the third quarter, but overall had a solid afternoon. After Cortes rushed for a 19-yard touchdown in the first quarter to give the Huskies a 7-6 advantage, Conklin scored on a 6-yard scamper to put Centennial ahead 14-6. Later in the game, he hit junior receiver Malachi Riley for a a 13-yard TD. That score increased the Huskies lead to 28-14 with 2:48 to play in the third quarter.

Cortes rushed for his second touchdown in the fourth quarter. The one-yard score put the game out of reach extending Centennial’s lead to 35-14.

Sierra Canyon’s defense played well for the majority of the game but ran out of gas in the second half. The group is physical and played to the level of a Division 1 Southern Section defense forcing three turnovers. Their issue on Saturday was a lack of depth due to injuries and just spending too much time on the field.

“I was proud of our defensive effort,” Sierra Canyon head coach Jon Ellinghouse said. “We knew playing against a team like that we were going to have to score and we didn’t…Both of our starting corners were out for this game [Jonah Lewis Jr. and D’shawn Jones Jr.] so it forced our tailbacks to play DB, which I think in the fourth quarter gassed us out a little bit too…[Centennial] wore us down a bit.”

The win virtually locks Corona Centennial into the Division 1 playoffs even with a game against Norco coming up in league play. Centennial and Sierra Canyon are two of the clear top teams in the Section. Expect the Trailblazers to still make the Division 1 field as well.

“I told my team, this isn’t going to define us win or lose,” Ellinghouse said. “It’s only the third game of the season. We’ll do our best to learn from it and respond.”