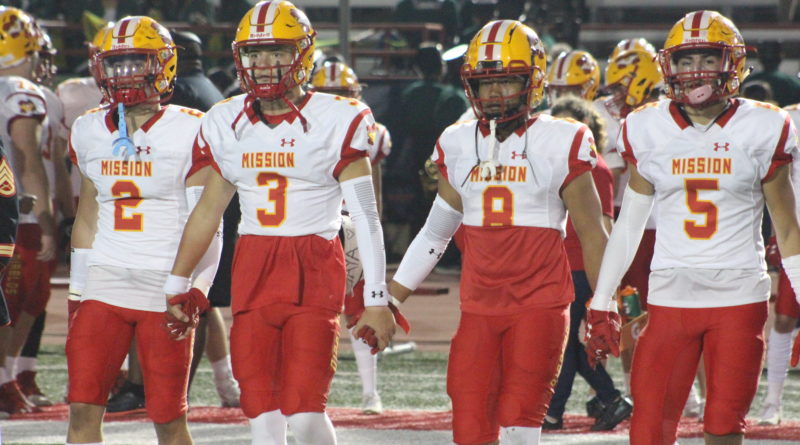 LONG BEACH, CALIF. — Chad Johnson coached teams are typically known for their offense, but on Friday night Mission Viejo’s (2-1) defense made the difference in a 41-14 win over Long Beach Poly (0-2). Defensive coordinator Brett Paton drew up a masterful game plan. Below are five takeaways.

Long Beach Poly’s offense didn’t pick up a first down until there was a little over five minutes to play in the second quarter. It took the Jackrabbits seven possessions to finally move the sticks.

“That was un-freakin-believable,” Mission Viejo head coach Chad Johnson said after the game. “All of the guys on defense, I’m so proud of you.”

Jake Higgins had a pick-six in the first quarter for the Diablos to put them up 14-0 and Trey Tolmaire added a second Mission Viejo interception in the fourth quarter.

Long Beach Poly sophomore quarterback Darius Curry was running for his life all night. He was sacked a handful of times and many of them weren’t the traditional tackle behind the line of scrimmage. Mission Viejo’s defensive line routinely got such strong pushes against Long Beach Poly’s offensive linemen that Curry would scramble out of the pocket and run out of bounds behind the line of scrimmage for sacks.

The Jackrabbits scored one offensive TD on the night and it came after the Diablos forced a turnover on downs but were then flagged for roughing the passer. They nearly pitched a shutout.

Mission Viejo senior running back Kenny Manassero rushed for three touchdowns in the win. He scored on a 49-yard scamper to put the Diablos up 7-0 and then again twice from short yardage to extend Mission Viejo’s lead. The Diablos led 28-7 after Manassero’s third touchdown run with 5:58 to play in the third quarter.

The Jackrabbits got back into the game at the end of the third when Donovan Turner intercepted a Kadin Semonza pass and returned it 60 yards for a TD, but those were the last points Poly would score.

Semonza bounced back from his interception and hit KJ Reed on a 20-yard fade to make the score 34-14 and put the game out of reach in the fourth quarter.

POLY SETTLES ON CURRY AT QB

After splitting time under center between Curry and senior Shea Kuykendall in their opening defeat against Gardena Serra, Long Beach Poly gave Curry the start on Friday and then he played the first two series. Kuykendall came in for the third series, threw a pick-six and then didn’t return. The Jackrabbits may go back to rotating in the future, but the job looked like it belonged to Curry against Mission Viejo even though he took some lumps and didn’t throw a touchdown pass.

This win keeps Mission Viejo alive to make the Division 1 playoffs in the Southern Section. They’re more likely a Division 2 team, but if they win out, they’ll almost certainly be in Division 1.

This was a tough defeat for Long Beach Poly. The Jackrabbits are now 0-2 and they face Corona Centennial in two weeks. Poly is still the clear favorite to win the Moore League, but after going 4-0 in the spring, the team had high expectations for the fall and so far they haven’t lived up to them.