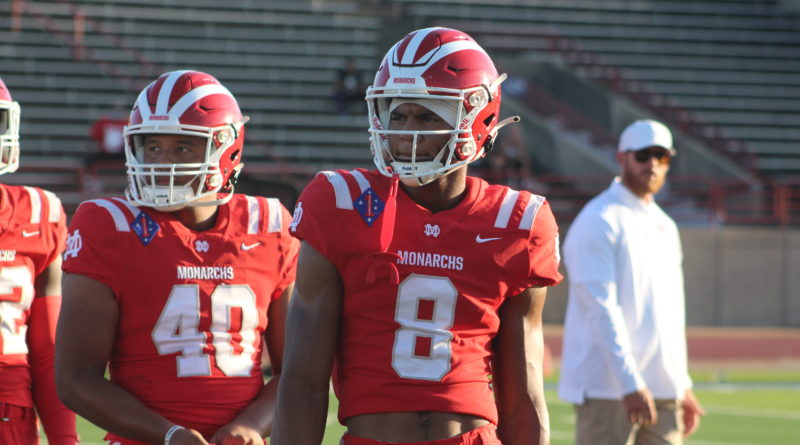 The fall 2021 California high school football season continued this week with several big games, including Mater Dei traveling to Texas and beating up on Duncanville 45-3. The win pushed the Monarchs ahead of St. John Bosco for the No. 1 ranking this week.

After the second week of action across California, here are SBLive’s Top 25 California high school football rankings. The statewide rankings span all 10 sections and are compiled by reporter Connor Morrissette. They will be released every Monday throughout the fall 2021 season.

Mater Dei went to Texas and dominated from the opening kickoff en route to a 45-3 win over Duncanville, last week’s No. 10 team. USC commit Domani Jackson had a pick-six on Duncanville’s first pass attempt and on the Monarchs first play on offense, Oklahoma running back commit Raleek Brown scored a 75-yard touchdown.

Through two games, St. John Bosco’s defense has been elite, but their offense hasn’t been up to their usual high standards, so they drop to No. 2. With so many Division 1 recruits on the roster, expect the Braves offense to improve.

De La Salle’s win streak against Northern California opponents is now up to 317 games following their 52-16 win over Stockton St. Mary’s. The Spartans scored 35 unanswered second half points in the win. Junior running back Charles Greer rushed for three scores.

The Friars have one of the best offenses in the country and that was on full display in their win against Mission Viejo, but their defense also played extremely well last Thursday. Corner Mike Hurst had an interception in the win.

In one of the more eye-opening results of the weekend, Corona Centennial steamrolled No. 18 Cathedral Catholic 57-14. Junior quarterbacks Izzy Carter and Carson Conklin, who alternate possessions for the Huskies, each accounted for two first half touchdowns in the victory.

Folsom dominated a talented Monterey Trail team 56-14 in their opener showing they are the top team in the Sac-Joaquin Section. Senior QB Tyler Tremain tossed five TDs in the win. Folsom will play against Jesuit on Monday night after Friday’s game was postponed due to poor air quality.

The Trailblazers beat Oaks Christian 21-9. Jason Jones rushed for 194 yards and a TD. He also caught a TD.

Serra’s game against Pittsburg was canceled due to poor air quality. The sky is the limit for a Serra offense that brings back QB Dominique Lampkin and do-it-all playmaker Hassan Mahasin.

Pittsburg has a very challenging schedule, but they have a blue chip QB in 2023 gunslinger Jaden Rashada. Their opener against Serra was canceled due to poor air quality.

Norco were the biggest risers this week thanks to a 40-22 win against No. 16 Santa Margarita. QB Kyle Crum and RB Jaydn Ott combined for five scores.

Rocklin beat Turlock 41-0 their opener. Star D-lineman Bobby Piland had four tackles for loss, one sack, one forced fumble and one fumble recovery in the game. Rocklin’s week two game was postponed due to poor air quality.

247Sports analyst Greg Biggins said it best on the Bally Sports broadcast when he characterized Lincoln’s performance against Los Alamitos as a game where the losing team should still move up in the rankings. Lincoln played like one of the state’s top teams in their 21-17 defeat to Los Alamitos. They’re a very dangerous teams in San Diego led by Oregon bound cornerbacks Jalil Tucker and Jahlil Florence.

Alemany played No. 2 St. John Bosco very tough before ultimately losing 24-3 and for that, they move up two spots.

The Dons were supposed to be one of the state’s best, but instead they’ve struggled to begin the year. They had five turnovers in their week one win against Torrey Pines and then they lost 57-14 to Corona Centennial over the weekend.

The Eagles are 2-0 following big wins over Oaks Christian and Birmingham. Paul Holyfield is a player to watch at running back and defensive back.

The Lancers are 2-0 under new head coach Rod Sherman. Senior running back Desmin Jackson is a player to watch.

Mission Viejo had a tough time with Servite losing 44-7.

Central beat Bullard 51-32 in their opener. Dayton Tafoya threw five touchdowns in the game but was intercepted three times.