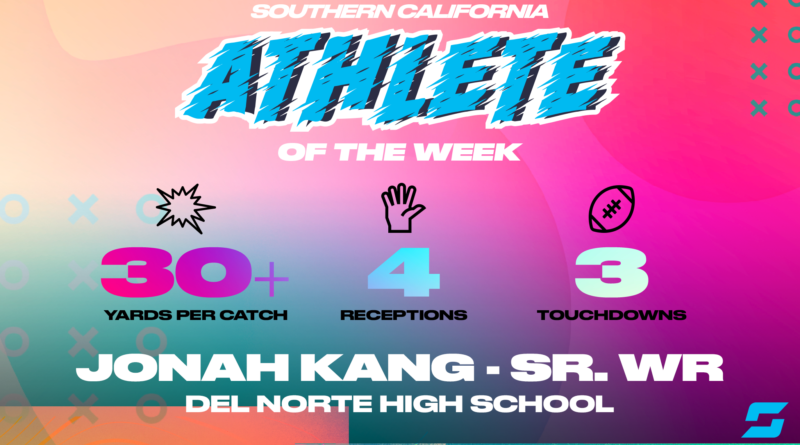 The senior caught four passes for 121 yards and three touchdowns, including a 59-yad TD grab, to help the Nighthawks beat Escondido 54-7 on Aug. 20.

Kang received 33.55% of the vote, beating out Bonita WR/SS Noah Mikhail who finished second with 21.38%. El Camino CB Marquis Bell finished third with 13.67% and Upland LB Bishop Blakely finished fourth with 9.1%. There were over 71,000 votes tallied this week!

We are currently accepting Athlete of the Week nominations. If you would like to nominate an athlete, please email regan@scorebooklive.com or message us on Twitter or Instagram at @sbliveca.

Here are the other athletes who were nominated for the week of Aug. 16-22:

Hunter Benton, Kennedy WR: Benton had 17 catches for 221 yards and four touchdowns in a one-point loss to Long Beach Jordan during week one.

Donovan Harvey, Elsinore RB: Harvey ran for 224 yards and three touchdowns on only 11 carries during a week one win over Vista del Lago.

Bryce Parker, Santiago WR: Parker was on the receiving end of four touchdowns from Tubbs, to go along with 12 receptions and 296 receiving yards.

Martinez Miles Jr., Cajon QB: Miles completed 10 of 12 passes on Friday night for 458 yards and eight touchdowns in a win over Carter.

Angelo Serena, Heritage RB: Serena averaged 8.2 yards per carry on Friday on his way to 222 rushing yards and four touchdowns against Santiago.

Dijon Stanley, Granada Hills Charter RB: Stanley had 217 rushing yards, including a rush of 65 yards, and five touchdowns in Friday’s win over Arleta.

Edward Ramos, Pacifica RB: Ramos ran for 211 yards and four touchdowns on only 20 carries in Friday’s 48-14 win over Fullerton.

Ty Pierson, Arcadia RB: Pierson showed his multi-purpose abilities on Friday accounting for 482 all-purpose yards and five touchdowns in a 43-25 win against Marina.

Jalen Shaw, Scripps Ranch RB/DB: Shaw rushed for three touchdowns on Friday and also collected two interceptions, returning one for a touchdown, in a 56-20 win over San Pasqual.

Jalen Daniels, Lincoln QB: Daniels passed for five touchdowns and added two more on the ground in his debut for the Hornets.

Noah Mikhail, Bonita WR/SS: Only a freshman, Mikhail had 14 tackles and a 45-yard receiving touchdown in his first high school game.

Gabe Nunez, Beaumont WR: Nunez set a school record with 15 receptions for 267 yards and three touchdowns in a 34-30 win over Orange Vista.