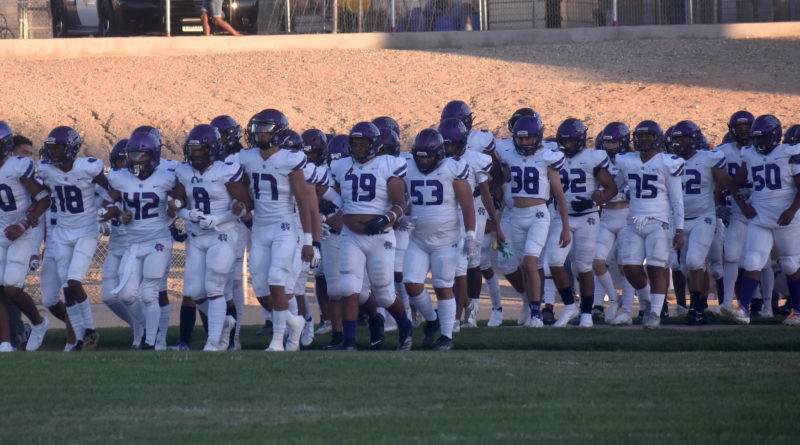 APPLE VALLEY– After their season-opener opener got off to a very rough start, Rancho Cucamonga came back to pull off an outstanding 27-19 win at Apple Valley on Friday.

Xavier Washington led the way with four touchdown passes. Here are five takeaways from the game:

Five minutes into their season-opener, it looked like Rancho Cucamonga’s inexperienced team of underclassmen was on the verge of getting blown out. They trailed 13-0 with 6:50 left in the first quarter against a much larger foe that already had a game under its belt, and was putting on a show in its home-opener on both sides of the ball.

Apple Valley’s imposing, hard-hitting front seven was treating Rancho’s offense like Swiss cheese out of the gate. 4-star Michigan commit Jayden Denegal led AVHS on an opening touchdown drive that he sealed with a short rushing blast, enabled in part by a plethora of RCHS penalties. The Cougars then fumbled in their own red zone, and Kaleb Most punched it in to make it 13-0.

But the Cougars would kick into gear immediately thereafter and score the game’s next 27 points, thanks largely to numerous individuals having breakout games to lift them over the top. (More on that shortly.) Their defense rounded into excellent form, holding Apple Valley scoreless until the fourth quarter, and to only six more points total. Up eight with about a minute left in the fourth, Christian Pierce sealed the game with an interception on a Denegal desperation heave on third and long.

“Honestly, it was just [a matter of] settling in,” said Washington. “We knew that we had the first-game jitters. And we knew since… we got a lot of young players where it’s their first time playing varsity, those kids just gotta settle in, and once we do that, we were able to come back… that’s all it really was, just settling into the game.

RANCHO’S NEXT GENERATION OF STARS INTRODUCE THEMSELVES

As for the Cougars’ offensive turnaround, Washington didn’t win this game singlehandedly by any stretch, but his brilliance outside the pocket is what gave them life.

The first half was tough for Rancho’s offensive line, and understandably so – they were facing one of the better front sevens in all of SoCal, which already had a regular season game under its belt against Mission Viejo’s enormous O-line. After the Cougars’ first two drives, Washington took it upon himself to scramble his team into an offensive rhythm, thanks largely by fantastic play from his receiving corps of Isaiah Lopez, Julian Lundy, and Jonah Dawson. Washington was extending plays on the run, constantly having to improvise, and the WRs were in sync with him as if the group had been starting games together for years. The receivers also simply were catching absolutely everything, and this wouldn’t have been a game if they weren’t hanging on through very narrow windows.

With that jolt of life and more time to figure things out, Rancho’s O-line stepped it up heavily in the second half, even though Apple Valley was still causing problems around the line of scrimmage. Based on this game, and the difficult plays their offense was consistently making under pressure, the Cougars are building something with seriously talented players who are ready to make a name for themselves.

Lopez had a 79-yarder to get Rancho on the board in highlight fashion, in which he seemingly shook off every defender on the field twice to get to the end zone. Lundy led the way with two touchdown catches, and Dawson was also uncontainable.

This win represented a lot more for RCHS than just a very impressive W on its season resume. After they only got three games in last season and returned very few seniors coming into this season, there wasn’t as much external buzz about this iteration of the Cougars compared to, for instance, their 2018 and 2019 teams. But none of that matters now, because it’s very clear that Rancho has young talent that’s ready to compete right now while continuing to improve. Of their top playmakers in this game, Lopez was the only senior.

Washington added that he wears No. 9 as a tribute to two players. One is Joe Burrow, who was slept on for three years of college, and eventually became a hero and star under center at LSU when his time came to shine. The other was former Mater Dei All-American and current Alabama QB Bryce Young, another undersized but blazing fast dual-threat QB. Washington certainly was a hero when one was needed making some Young-esque plays in this one.

THE BRIAN HILDEBRAND ERA IS OFF TO A GREAT START

Speaking of new faces, this was Brian Hildebrand’s first contest with the Cougars, and how better to start things off than with a statement win over a great opponent. Rancho Cucamonga faces an even steeper task next week against Norco, but if they can pull off the upset, they’ll have a serious chance to run the table in his first season as their head coach.

THE BATTLE FOR SAN BERNARDINO?

Down the road, this match could prove to be the deciding factor for which team has bragging rights as best in San Bernardino County. Etiwanda, Upland, and Cajon will all have something to say about that, but Rancho Cucamonga’s victory at Apple Valley projects to give whoever wins the Base Line League a major edge.

This loss has to be deflating for the Sun Devils after they started off in complete control of this game. And if they lose next week against formidable Murrieta Valley, their path to making the CIFSS Division 2 playoffs – as opposed to Division 3 – gets drastically harder.

On the bright side, dropping a game against one of the most athletic teams out there gives them a great idea of what specifically they have to shore up before the playoffs. Around the line of scrimmage is where Apple Valley showed an advantage in this one, and that wasn’t enough for them to win. But the Sun Devils have significant talent all across the field, not just up front, and they have a lot of time before November to figure out what they need to do to handle teams that are faster than them.

Denegal ran for a touchdown and threw a touchdown pass to Logan Moon. Kaleb Most also had a touchdown run for AVHS, and Brandon Armijo recovered a fumble.