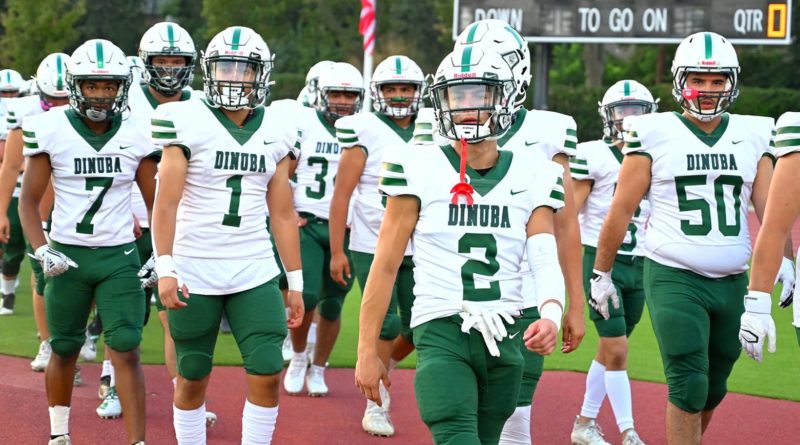 TULARE, Calif. — Every once in a while, you attend a football game and have the opportunity to witness a special one-of-a-kind performance. Friday night’s Dinuba-Tulare Western game was one of those performances for Dinuba senior wide receiver Mikey Olvera.

Olvera broke the single-game record for receiving yards at Dinuba, hauling in 10 receptions for 277 yards and three touchdowns as Dinuba bounced back from a close loss last week with a 48-20 win over the Mustangs. The previous record was 273 receiving yards.

While Olvera was putting on a show, Dinuba quarterback Casimiro Barragan was having an amazing game of his own, completing 20 of 32 passes for 432 yards and four touchdown passes. As a team, Dinuba amassed a total of 599 yards of offense while they held the Mustangs to 191 yards of total offense.

“Last year (Barragan) struggled, but this year he finally had an offseason, so him and Michael (Olvera) have been clicking,” said Dinuba coach CJ Lester. “They’ve been tough to stop on defense for me as the Defensive Coordinator, and stopping those guys has been tough all summer and fall, so I knew it was going to happen. I just didn’t know it was going to happen this early.”

For the Mustangs, they were led on the offensive side of the ball by quarterback Carmine Ficher, who completed 13 of 26 passes for 151 yards and three touchdown passes while also throwing two interceptions.

Offensively, the Emperors got on the board first on a 39-yard pass from Barragan to Olvera in the first quarter. The Mustangs would respond on a 12-yard pass from quarterback Carmine Ficher to Ben Leon. After that, the Emperors would score the next 21 points to take a 28-7 lead into the half and never look back.

“We fought last week against a tough Clovis East team, so I was kind of wondering how they were going to come out against Tulare Western, and our kids rose to the occasion tonight,” said Lester. “Our kids went through a whole 10 day quarantine right before the season started, so these kids have been resilient since then. Our kids were locked in, so I knew it was something that wouldn’t be too hard for us to bounce back from.”

For Dinuba (1-1), they look to carry the momentum into next Friday night’s home opener against the Torres Toros from Madera. Meanwhile for the Mustangs, they will make the trip down to Bakersfield next Friday for a matchup against the Titans from Frontier.