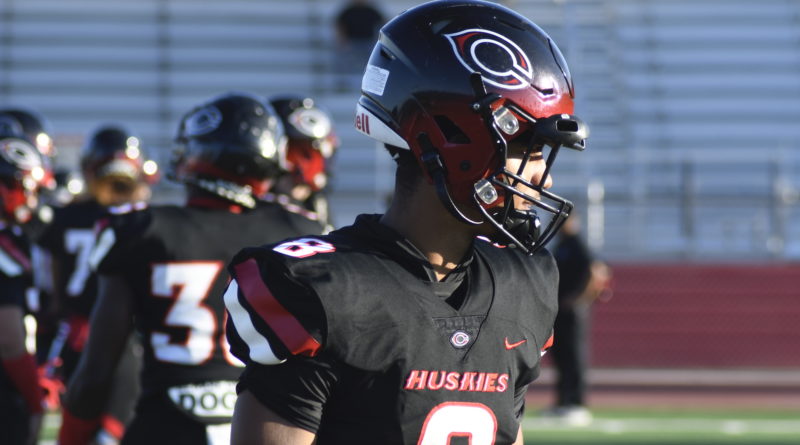 CORONA — Corona Centennial wasted no time getting going on Friday night, scoring two touchdowns in their first five plays to grab a double-digit lead 65 seconds into the contest against Cathedral Catholic. The Huskies added 44 more points throughout the remainder of the game on their way to a 57-14 win over the visiting Dons.

Junior quarterbacks Izzy Carter and Carson Conklin, who alternate possessions for the Huskies, each accounted for two first half touchdowns and displayed the dynamic they bring to the team.

“Izzy’s a weapon running the football, he’s like having another running back out there,” Centennial head coach Matt Logan said. “I’ve had some really good running quarterbacks but he’s not a running quarterback, he’s a running back. His athleticism is amazing and then Carson brings a gunslinger type mentality to us and they made some mistakes tonight but overall, I’m happy with their play.”

Conklin was 11 of 17 through the air for 188 yards and two touchdowns.

Junior running back Jayson Cortes had 11 carries for 113 yards and scored two rushing touchdowns in the third quarter.

Senior running back Lucky Sutton was one of the lone bright spots for the Dons, finishing with 182 rushing yards and two touchdowns.

Finding themselves trailing by three touchdowns less than six minutes into Friday’s game, Cathedral Catholic picked things up, cutting the lead to 27-14 at the midway break. The Dons were unable to capitalize, going three and out after receiving the second half kickoff and sailed the ensuing snap over the punter’s head and through the end zone for a safety. After receiving the free kick, Centennial capitalized two plays later when junior running back Jayson Cortes sprinted in for the touchdown, extending the lead to 36-14 over a Cathedral Catholic team that was unable to find an offensive rhythm for much of the night.

“This is fast, physical Husky football. We know we’ve gotta make a statement, last year was a big fluke for us. This is the best we’ve ever been and we’re coming for state, we’re coming for it all this year,” Centennial junior quarterback Izzy Carter said after the game.

Centennial went 4-1 during the 2021 spring season and had their 57-game league winning streak snapped at Norco.

The Huskies will take on Sierra Canyon, JSerra, and Long Beach Poly before jumping into Big VIII play as solid favorites.

CENTENNIAL OFFENSE LOOKS TO BE IN MIDSEASON FORM

Despite issues with COVID that slowed the Huskies in practice and ultimately cancelled their first game, Corona Centennial looked sharp on offense while utilizing both quarterbacks. The Huskies were able to move the ball efficiently on the ground and through the air, scoring on all five of their second half possessions.

“Having the COVID issue we had to cancel a game and basically didn’t have our linemen for a week at practice and so it felt like we were behind the ball a little bit,” Matt Logan said. “When we scrimmaged last week, we felt we’ll be able to do some things and it was just nice to get out here and play a game of significance and play football.”

The 57 points the Huskies scored equaled the most the Dons had allowed in a game since 2003.

“That’s a good team over there and we just showed what we can do as a team when we come together and are at our best,” Izzy Carter said.

The Huskies answered in a strong way, shutting out the Dons in the second half and pressured quarterback Charlie Mirer for much of the night.

“We’ve got two juniors in there and the senior Gavriel (Lightfoot),” Matt Logan said. “They’re a very physical, big group and that’s something from our standpoint trying to compete against the beast in Orange County and Bosco, is matching up with those lines year in and year out on both sides of the ball. One year we might have an o-line that can match up and one year it might be the d-line but to have both is special so we might be close to that.”