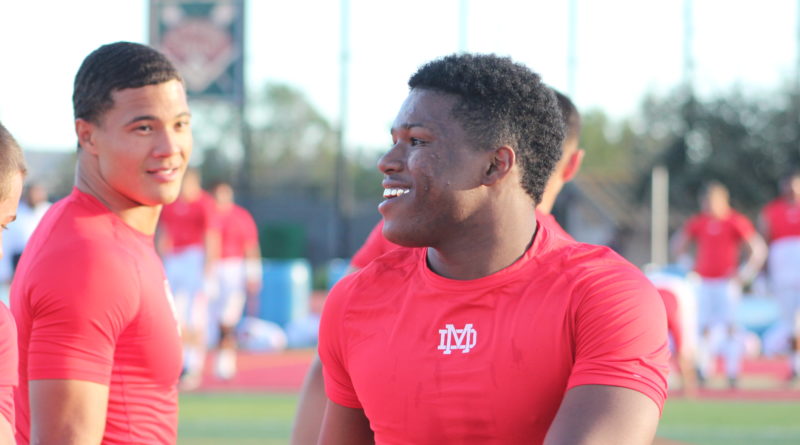 The No. 10 Duncanville Panthers (Texas) will host the No. 2 Mater Dei Monarchs (California) on Friday night in arguably the biggest game of the 2021 high school football season. The Texas vs. California tilt represents the first clash this season between two Top 10 teams in the SBLive Power 25 rankings.

Both teams are loaded with talent, with more than 40 players holding FBS offers. Here’s a closer look at the top playmakers on both teams.

Stay with SBLive throughout the week for complete coverage of this showdown. SBLive reporters Andrew McCulloch and Connor Morrissette will be bringing you behind the scenes with comprehensive previews, and both will be on the sideline Friday night at Duncanville’s Panther Stadium.

Brown had as strong of a freshman year as possible during the California spring high school football season. He completed 74 of 107 passes for 973 yards, 15 TDs and one INT. He also rushed for one TD. Brown has received scholarship offers from Arizona, Pittsburgh and Utah. He’s ranked as the No. four QB in the 2024 class by 247Sports.com.

“We have tremendous confidence in Elijah and we’re now giving him more responsibility in our offensive packages this season,” Mater Dei head coach Bruce Rollinson said.

Brown is one of the most explosive tailbacks in the nation. In the spring, he rushed 53 times for 367 yards and five TDs.

Williams was a red zone weapon in the spring. In five games he made 16 catches, with five coming for touchdowns.

“CJ Williams, what else can I say?” Rollinson said. “He’s a four year experienced kid — a top wide out in the country.”

Barkate should have a breakout senior season after not playing too much as a junior. He’s received scholarship offers from Arizona State, Notre Dame and Oregon, among others.

“I can’t wait to unveil Cooper this season,” Rollinson said. “He’s a great route runner who can take the top off of the defense.”

Tolo has been starting for the Monarchs since his freshman season. He’s received scholarship offers from Colorado State, Kansas and Oregon. Tolo will be playing center this season for the first time.

When Bailey is healthy, he’s the top individual linebacker in California. In two games last season, he made 13 tackles, had four sacks and a forced fumble. He’s received Division 1 scholarships from some of the top teams across the country including Alabama, Oklahoma and USC.

Kerry made six tackles and had a sack in three games in the spring.

Jackson is one of top 2022 recruits in the country. His interception against St. John Bosco in the spring clinched a victory for the Monarchs. He’s also a great sprinter. Jackson tied the state record in the 100 meters this spring with a time of 10.25 seconds.

Hunter was named the Trinity League Defensive Player of the Year in the spring. He had two interceptions last season.

“Josh is a four year starter,” Rollinson said. “He has incredible ability and cover skills.”

Sidney intercepted two passes in the spring. He also made five tackles.

“Cameron Sidney is a two year starter coming back for us who has incredible cover skills,” Rollinson said. “He’s doesn’t get as much press, but he’s really good.”

Abor enters the 2021 season as one of the most elite defensive prospects across the country and one of the most dangerous edge rushers throughout Texas high school football. The 6-foot-4, 240-pound defensive end tallied 51 tackles, 26 TFL and 14 sacks during the 2020 campaign and helped lead the Panthers to the 6A DI state semifinals. Abor has been tabbed a five-star recruit by each of the major recruiting services and remains one of Texas’ highest-rated uncommitted Class of 2022 prospects with offers from Alabama, LSU, Ohio State, Oklahoma and USC among others. Abor should anchor a fearsome Duncanville front seven and one of the DFW’s deepest defensive lines.

Early is one of two FBS prospects holding down Duncanville’s veteran offensive line. He possesses an elite combination of size and athleticism, clocking a 4.9 second 40-yard dash despite his 6-foot-5, 290-pound frame. Early projects as an interior offensive lineman at the collegiate level. He committed to Florida State in early August after receiving nearly three dozen DI scholarship offers. The Panthers will depend on Early, one of two returning senior starters on the offensive line, to provide stability up front as their offense attempts to match the 45.1 points per game it averaged during the past two seasons.

Madison will lead a ball-hawking secondary as one of Duncanville’s most talented juniors. He stepped into the Panthers’ starting lineup for the first time last season and immediately caught the attention of college recruiters. Madison earned more than a dozen DI offers from teams across the country including Michigan, Oklahoma, Texas and USC among others during the offseason and should be one of the state’s premier defensive backs in 2021. He recorded 36 tackles and five interceptions in 12 games during the 2020 season, which he split between cornerback and safety. Madison, a four-star recruit, remains uncommitted heading into his junior year.

Medlock should be poised for a big season in the Panthers’ backfield. Duncanville’s workhorse back returns behind one of the state’s most talented and experienced offensive lines while the team tries to pinpoint its next starting quarterback. Medlock played a central role in the Panthers’ high-octane offense last year by running for 1,232 yards and 22 touchdowns on the ground. He committed to Colorado State in May after receiving several DI offers. The 6-foot-1, 215-pound back should receive plenty of touches during his team’s season opener and will help set the tone offensively for Duncanville.

Wright is the second elite college prospect on Duncanville’s defensive line. Wright — a 6-foot-2, 270-pound defensive tackle — presents severe matchup problems for opposing offensive lines when lined up next to Abor. He tallied 86 tackles, a team-high 36 TFL and eight sacks during his junior season, which garnered him plenty of national recruiting attention. Wright committed to Oregon State to give the Panthers’ three Power Five prospects in its starting front seven defensively. Look for Wright and Abor to clog interior running lanes and collapse the pocket as edge rushers.

Williams is one of the top Class of 2022 offensive line prospects throughout Texas and Duncanville’s second senior starter up front who’s committed to a Power Five program. Williams is listed as a three-star recruit by the major recruiting services, but his strength, size and experience helped him land offers from Miami, Oklahoma, Texas and Texas Tech among others. He ultimately committed to Oregon in early July. His 6-foot-7, 360-pound frame makes him one of the state’s most physically imposing O-linemen and a capable leader for the Panthers upfront. Williams’ protection will be vital as the Panthers break in a new starter at quarterback.

Crook rounds out an outstanding group of returning starters in Duncanville’s front seven. The senior led the way with a team-high 93 tackles, 16 TFL, six sacks and three interceptions during his junior season in 2020. Crook has proven he’s one of the most versatile defenders throughout Class 6A with a demonstrated ability to defend against the pass while also filling running lanes. He committed to Arkansas over Oklahoma State, Texas Tech and many others in late July after earning more than two dozen DI offers. With the Panthers’ experience on the defensive line, expect Crook to make big defensive plays at all three levels against the Monarchs.

Turner leads a group of veteran receivers who are back in the fold for Duncanville. Despite only being a junior, Turner posted 504 yards and nine touchdowns through the air on 45 completions, each of which leads all returners for the 2021 season. His elite speed (4.5 second 40-yard dash) on the outside has helped him make a name for himself early in his high school career. Turner is tabbed as a three-star recruit who holds offers from Baylor, Georgia Tech and Utah among others, but remains uncommitted. His experience as an underclassman in 2020 should help Turner emerge as one of Duncanville’s offensive leaders this year with a new starting quarterback incoming. His game-breaking speed should play an important factor in the Panthers’ season opener.

Simmons is the only underclassman to earn a spot on this list, but the Panthers expect big things from the sophomore standout this year. Although he primarily played sub-varsity ball in 2020, that didn’t prevent the rising star from capturing his first few college offers from Marshall, Michigan State and SMU. The 6-foot-3, 210-pound Simmons has the size and versatility to line up on the Panthers defensive line, play linebacker or do both. With several established playmakers surrounding him defensively, expect Simmons’ stock to continue rising. He should be due for several big plays in what could be a breakout performance for the sophomore versus Mater Dei.

Vinson will be one of the top Class of 2022 recruiting targets throughout Texas at tight end as a capable blocker upfront and dangerous pass catcher in the open field. He stands at 6-foot-4 and 250 pounds, presenting challenging mismatches for most opposing defenses that either have to guard him with an undersized defensive back or a linebacker who gets beat in coverage. Vinson played key roles offensively for Duncanville during his sophomore and junior seasons, helping the Panthers advance to the 6A DI state championship game in 2019 and state semifinals in 2020. He enters the 2021 season with 12 career receptions for 220 yards and four touchdowns and offers from Kansas, Tennessee State and Texas State. Vinson’s targets and role within the offense should both increase in 2021 as a prime red-zone target.