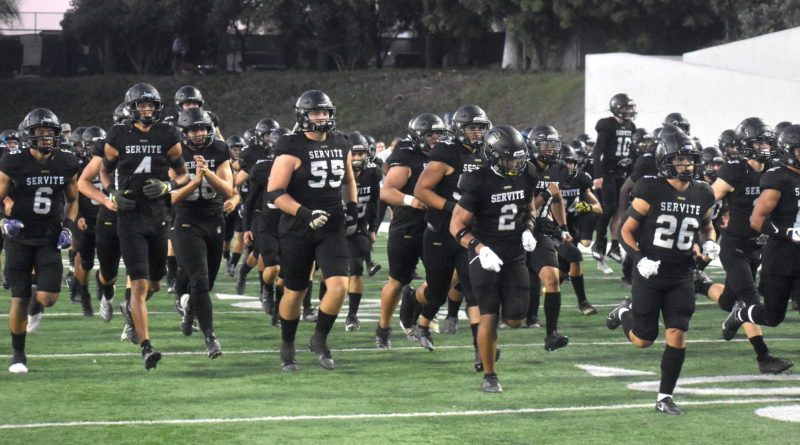 COSTA MESA, Calif. – It took the Friars’ offense nearly a quarter to get going, but Servite left no room for doubt Thursday night in a 44-7 statement win against Mission Viejo.

Servite QB and 3-star Arizona commit Noah Fifita threw an interception early in the first quarter, but was unstoppable from there on out. He completed 12 of 21 passes for 293 yards and four touchdowns, and also ran for 69 yards and a touchdown. Here are five takeaways from the game:

In 2019, fourth-seeded Mission Viejo knocked fifth-seed Servite out of the CIFSS Division 1 playoffs in a 38-35 absolute nail-biter. For the Friars who were part of that team as sophomores, this win was extra meaningful for that reason.

“This is a big win for us,” said Fifita. “My sophomore year, these are the guys that ended our season, so, ever since then we’ve been wanting to run it back with them. We were supposed to play them first last year, but obviously, COVID [shortened the season]… Ever since our calendar came out, we’ve had these guys marked. We circled that game and we’ve been looking forward to it ever since… This one is for our seniors in 2019, and for our seniors this year.”

For nearly a quarter, it appeared that the Diablos’ defense might be able to buy time for their offense to get going. The game was scoreless until late in the first quarter, when Mission Viejo forced a short field goal after an excellent red zone stand.

Then, Servite landed a haymaker. Michael Hurst grabbed an interception on Mission’s next drive, and Fifita quickly found Keyan Burnett downfield for a highlight touchdown just before the end of the first quarter. As the Diablos’ offense remained stymied to start the second, it was clear that the Friars’ defense had the game secured, regardless of the fact that their offense would end up with its usual dominant display.

Oregon commit Tetairoa McMillan, one of the top-ranked WRs in the country, had multiple highlight catches, including one for a touchdown. He also showed off his ability to contribute in other phases of the game in his first ever complete night of work on defense, recording both the first interception and field goal block of his high school career.

THE FRIARS ARE A COMPLETE TEAM

This game should serve as a reminder that Servite is a product of a lot more than just its few biggest names. Just having elite talent in the passing game isn’t nearly enough to beat Mission Viejo, let alone give the perennial CIFSS Division 1 contender one of its worst blowout losses in quite a few years. The Friars have an elite defense, and one of the top offensive lines in the state as well – despite not having as many big names in those areas as other Trinity League heavyweights. Mikey Welsh had two catches in which he impressively picked up significant yardage after contact, including one for a touchdown. Wesley Taylor also had a touchdown catch, and Tyler McCown ran for a touchdown in this one as well after RB Houston Thomas was the star last week against Edison.

“We’ve got some guys on this team… we’ve got dudes,” said Fifita.

“Jacob Manu, best linebacker in California. Michael Hurst, who got a pick today. Mason Graham, Boise State. Josiah Laban, who I think is the best O-lineman in the Trinity [League]. It’s not just the Noah/T-Mac/Keyan show, our Servite team is legit. And you see the guys we have on defense, they’re legit as well. It’s kind of frustrating hearing my name, T-Mac’s name when we’ve got [other] guys that deserve to get the spotlight as well.”

DIABLOS SHOW SIGNS OF LIFE DESPITE A DISAPPOINTING NIGHT

Getting blown out uncharacteristically badly had to sting for Mission Viejo, but the Diablos did have some positive takeaways in this game. Their defense played Servite much more challengingly than almost any others in the past couple seasons, and did a good job of shutting down Servite’s running backs. They strung a lot of good snaps together on that end that were eventually nullified by their foe’s incredible penchant for beating teams with “the big play”. Additionally, Semonza showed a lot of coolness under pressure despite having a tough night, and displayed a very good ability to react to a collapsing pocket, including an impressive rushing touchdown.

There’s no such thing as a moral victory for a team whose aspirations are always to compete for a Division 1 title, but Mission looks like a team that will be ready for nearly any other challenge that can be thrown at it short of a Trinity League contender.