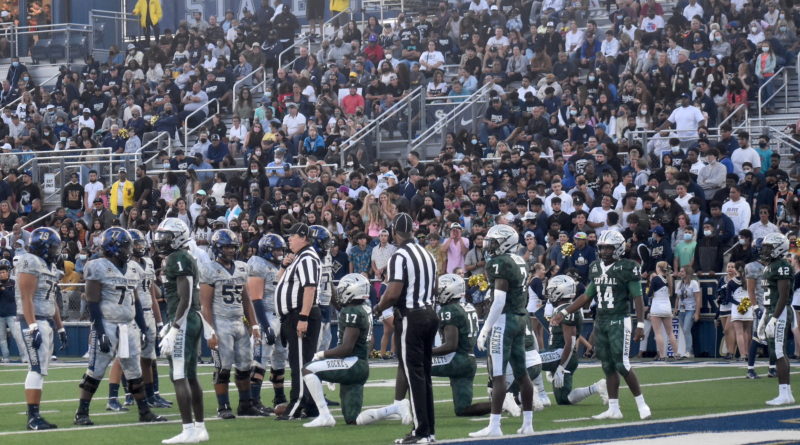 Here’s a closer look at the top storylines in the first week of the 2021 Southern Section high school football season:

Top-ranked St. John Bosco defeated a national top-20 team, Miami Central, 35-12 in a game that was never close. Pierce Clarkson (three touchdown passes), Jabari Bates (two rushing touchdowns and a touchdown catch), and Chedon James (141 yards and a touchdown receiving) all had strong nights on offense, but it was Jairus Satele, Matayo Uiagalelei, and the Braves’ lines that stole the show.

More projected Division 1 teams rolled to big wins against great teams. Los Alamitos, ranked fifth in the section, defeated Bakersfield 65-18. Fourth-ranked Sierra Canyon pulled out a competitive but very decisive 40-14 win against JSerra, No. 10 Santa Margarita routed San Juan Hills 38-14, and No. 12 San Clemente beat Oceanside by a surprisingly lopsided score of 38-0. RB Houston Thomas, QB Noah Fifita, and DL/OL Mason Graham had big nights in No. 3 Servite’s 54-14 win against Edison in a game that was scheduled at the last minute due to prior cancellations.

There were numerous season-openers that came down to the wire as well. In perhaps the section’s most exciting game of the week, No. 15 Inglewood came from behind in the second half to defeat No. 11 Loyola 29-26. Orange Lutheran started off the Rod Sherman era with off something of an upset, a 31-20 road win against reigning Mission League co-champion No. 18 Serra (Gardena). No. 20 Ayala eked out a 21-20 Battle of the Bone victory against rival Chino Hills, and sophomore quarterback Bryan Wilson got his first D-1 offer from Florida State the very next day.

No. 14 Apple Valley at No. 9 Mission Viejo was tied after three quarters and shaping up to be the game of the week before the Diablos won the fourth quarter 23-0 for a 44-21 win. No. 13 Norco at No. 19 Vista Murrieta was also close for most of the game before the Cougars pulled away late for a 42-26 victory. In other Inland Empire news, No. 21 Etiwanda was able to grind out a 20-6 victory over 2019 CIFSS Division 5 champion Aquinas.

Aliso Niguel got its first win under Michael Calahan with a 28-20 victory over Huntington Beach.

Lastly, while it wasn’t an upset, No. 16 Chaminade’s 48-17 win over No. 22 Oaks Christian was perhaps the most eye-opening result of the night. Another candidate would be Upland shutting out La Habra 13-0.