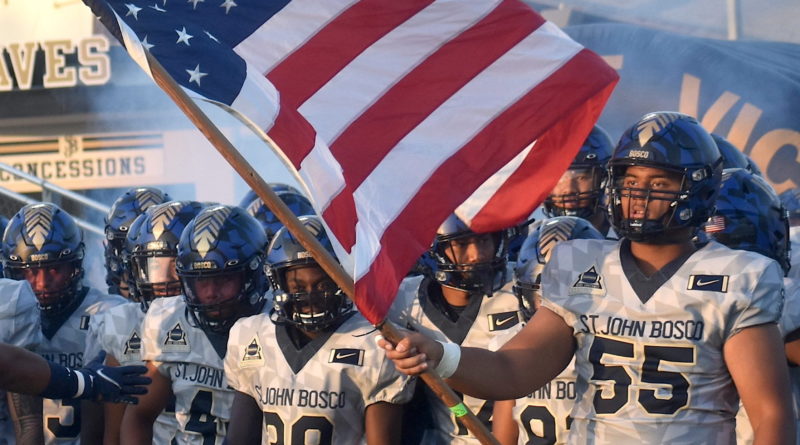 OVER RIGHT AFTER IT STARTED

St. John Bosco started putting the game away on literally its very first play. The Braves won the toss and deferred, and R.J. Jones recovered a fumble they forced on the ensuing kickoff. Jabari Bates quickly took a shovel pass from Pierce Clarkson into the end zone, and Bosco was up 7-0 before a minute had expired. The Braves then forced back-to-back three-and-outs, and scored quickly after getting the punt both times.

So, just a little over five minutes into the game, Miami Central already trailed 21-0. The Rockets never stopped battling, and were able to stop the bleeding until the fourth quarter. But by the time the opening flurry had settled, they were essentially already out of the game.

BRAVES WIN IN THE TRENCHES

While the first-minute score alone set the tone for the game, St. John Bosco was too dominant in the lines to let the Rockets back into the game. The Braves’ entire defense was excellent all game, but it started up front with Jairus Satele and Matayo Uiagelelei leading the charge against Central’s offensive line. Nate Burrell was one of multiple other Braves who helped ensure that the Rockets’ offense would never have a chance. Miami Central’s points came on two second quarter field goal, and one solid touchdown drive in the fourth that came with several of Bosco’s top defensive players resting.

The Braves’ offensive line wasn’t perfect, but they still looked the part of one of the nation’s best, and did more than enough to give the playmakers the time and room they needed to work. Earnest Greene not only helped anchor the strong offensive effort but also made a touchdown-saving tackle in the second half. Rockets CB Caleb McKenzie was nearly in the clear after grabbing an interception and taking it down the field, but Greene – a 6-foot-5, 340-pound lineman – got to him around the 15-yard line. Bosco shortly thereafter recovered a Miami Central fumble in the Braves’ own red zone.

Satele said after the game that the key to the program’s year-in, year-out dominance up front defensively is adhering to the Braves’ coaches game plan.

“We knew that this was a good team coming in … I just give credit to our coaches,” said Satele. “Our defensive coordinator, Coach King. We just follow our game plan … and go from there … The three people next to me, sometimes two (when in a 3-4 front), we trust each other, the chemistry is there, so we pick each other up.”

It’s easy to overlook given the lopsided score, but the Rockets had one of the better defensive efforts any team has given St. John Bosco in the last few years. After trailing 21-0 less than halfway through the first quarter, Miami Central didn’t allow another point until the fourth quarter. Holding the Braves to 35 points is already a statistically outstanding accomplishment, but doing it when the Braves got advantageous field position numerous times – and also when Central’s offense couldn’t stay on the field – makes it even more impressive.

The Rockets’ defense was touted as one of the best in the country coming into the season, and expect it to live up to the hype this fall.

Braves’ head coach Jason Negro said at Trinity League Media Day earlier in the month that a national championship is one of a few specific team goals this season, as it is any season. And these cross-country clashes between elite programs almost always have a major impact on who ends up as the national champion.

If Bosco hadn’t been ready to go from Week 0 against another one of the better teams in the country, their chance at a national title likely would already be out of reach. Instead, their odds of winning it just increased.