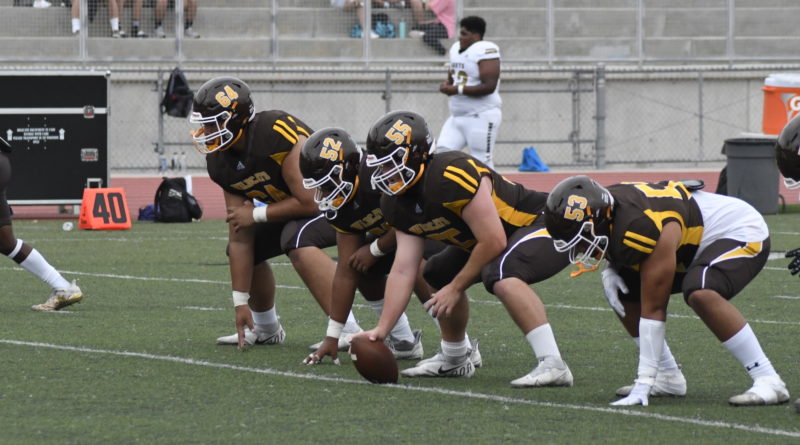 OCEANSIDE, CALIF. — In a week one matchup between two Top 10 teams in the San Diego Section, it was El Camino that took control of the game late in the third quarter on their way to a 21-13 win over St. Augustine.

El Camino struck first on Friday night when senior quarterback Kiah Reid plunged in from one yard out to give the Wildcats an early 7-0. Over the next 18 minutes of the first half, they turned the ball over four times and were lucky to find themselves tied at seven at the halftime break.

“We we’re just struggling a little bit but honestly our guys knew that’d we’d continue to fight and we knew we could dig ourselves out of it, we’ve done it before,” El Camino head coach Michael Hobbs said. “Our captains are the same ones that have helped us come back in other years and they’ve really stepped up.”

The Wildcats cleaned things up in the second half and despite trailing 13-7 midway through the third quarter, they orchestrated an 11-play, 61-yard drive that they converted into a go-ahead touchdown that put them in front for good.

“It’s a long season this year it’s not just four games this time, so we’re gonna continue to get better,” Hobbs said.

Losing running back Landon Kahlil-Lopez to an injury less than five minutes into the game on Friday night, El Camino turned to their power rushing package named ‘Rambo’ throughout the game.

“We do it when we need it, it’s a tradition here,” Michael Hobbs said. “Herb Meyer (San Diego’s winningest football coach) ran it since he opened up the place. It’s called Rambo, I sat down with Herb Meyer and he taught me how to run Rambo and he’s says, ‘I’m telling you right now, you run it this way it’s gonna work’ and I believe in him.”

After taking a one-point lead over the Saints as the third quarter expired, the Wildcats were able to chew up clock and wear down the Saints up front with their heavy rushing attack. After getting down near the goal line, the Wildcats handed the ball off to junior offensive lineman Pe’a Misaalefua who rumbled in from three yards out, giving El Camino an eight-point cushion.

The Wildcats are no strangers to letting their lineman get carries, and it was Pe’a Misaalefua’s turn on Friday night. The junior carried eight times for 33 yards and crossed to goal line in the fourth quarter to give the Wildcats their third and final touchdown of the night.

“The guys wanna come here and play for us because they know if you’re a big guy and can run the rock then I’m gonna give it to you. I don’t care if you’re an offensive lineman,” Hobbs said.