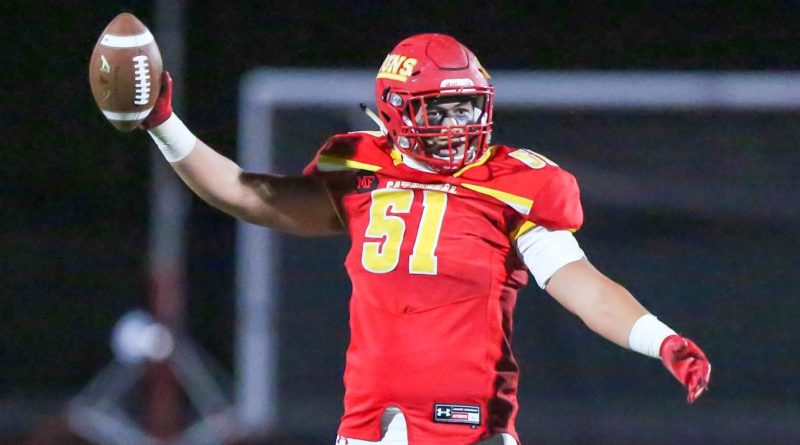 San Diego Section high school football teams kick off their fall 2021 seasons this week, which means it is time to take a closer look at the best players in the section.

Stratton passed for over 1,200 yards and threw 19 touchdowns during the spring season. He’s committed to Washington.

Sutton averaged over 180 yards rushing per game in the spring. San Diego State is among his offers.

A four-year varsity player, Washington makes an impact on the ground, in the passing game, and in the return game.

Haynes averaged over 33 yards per reception during the spring season, reeling in four touchdowns. San Diego State and Arizona State are among his offers.

Keels jumped onto the scene with 44 catches for 868 yards and nine touchdowns in only five games for the Patriots during the spring season.

Sandoval (6-6, 320) is a monster at right tackle for the Saints. His first offer came in from Nevada.

Filippone anchors an experienced group up front for the Falcons. Schools from the Ivy League and Patriot League are among those recruiting him.

Zimmerman (6-4, 285) brings a physical presence to the Pirates line. Offers have arrived from Army, Air Force, and USD.

Rodriguez is one of the top junior linemen on the west coast. Arizona is his most recent offer.

Letuli leads a Dons line that is experienced and should be one of San Diego’s most dominant.

Moi was dominant for the Dons during their undefeated run in the spring season. He committed to Cal after offers from over 20 schools.

Halton is an experienced playmaker for the Saints that also sees time at running back. He’s committed to Oregon.

Rowell (6-5, 260) is a force up front for the Falcons. He recently committed to Stanford.

Malotumau is a run stuffer for the Wildcats. Nevada, Eastern Washington, and Idaho are his current offers.

Edwards has been an impact player for the Crusaders since arriving on campus. Notre Dame, Oregon, and USC are among his many offers.

Letua is an experienced, hard-hitting linebacker for the Grizzlies.

White was a disrupter, racking up 18 tackles and five sacks during the spring season. Arizona and San Diego State are among the double digit offers he’s received.

A two-way player and one of the fastest players on the west coast. Tucker has Oregon, Washington, and Florida State in his top three.

Florence pairs with Tucker to form one of the best cornerback duos you’ll see. He’s committed to Oregon.

Snyder is one of several dynamic two-way players for the Crusaders. Colorado and Oregon State are his two most recent scholarship offers.

Davis enters his third year as a starter for the Lancers and is very productive on both sides of the ball.