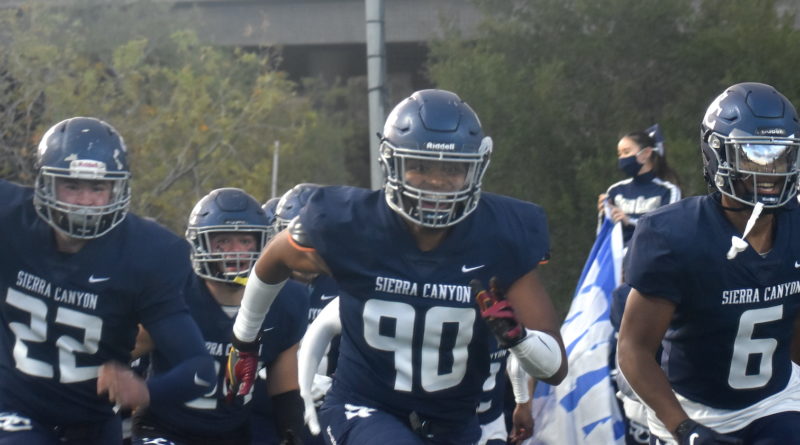 SBLive is previewing the Top 50 high school football teams in California ahead of the fall 2021 season. Here’s an inside look at the Sierra Canyon Trailblazers of the CIF Southern Section, the No. 6 team in our countdown.

Ellinghouse on his QBs: “Daniel is our returning starting QB. He’s had some college interest this offseason. He’s got a strong arm, plus he’s smart and athletic. Alonzo is a very talented QB too. Both of the QBs will see time this year. We’ll see where that takes us, I haven’t made a final decision yet on anything.”

This backfield is loaded. Jones rushed 50 times for 356 yards and seven TDs in the spring. He also caught 11 passes for 179 yards and two TDs. Cooks and West are transfers. They’d both be featured backs on other teams in the Southern Section. They will each get a lot of touches.

Ellinghouse on his RBs: “Jason Jones is one of the more talented kids I’ve ever been around. He’s in fantastic physical shape. He’s worked hard. I’m excited about him. Terrell is among the fastest players in the state and he’s really impressed me since he got here. He’s got a Power 5 level future. Darryl West is very fast and athletic and he will also play in the slot. He’s going to add some new things to our offense. He’s impressive.

Jones is the team’s leading returning receiver. He caught eight passes in the spring. He’ll be playing on both sides of the ball. Arango-Serna transferred in from Chaminade and should have a big year. Crawford and Wrighster are two sophomores Ellinghouse thinks will be in the mix as well.

Ellinghouse on his WRs: Dom has been fantastic for us so far. Cole will start for us. He’ll be a future star. Damon plays QB too, but he’ll play some receiver for us. He’s really athletic. He’s a future star.”

The group will be the foundation for a strong rushing attack. Harris hasn’t committed yet, but is also a D1 prospect.

Ellinghouse on his OL: Mike is as athletic of a kid as I’ve seen at that size. He’s an elite level prospect that we’re very excited and fortunate to have on our team. Dashaun is another top lineman. He’s a tactician who will play on both sides for us. Kenji is recovering from an injury and we’re excited to see him come back and show the world what he can do.”

This group is the strength of the team. Larry led the state in sacks in the spring with seven. He’s received multiple D1 offers. Harman made 25 tackles and had three sacks in the spring. Quiroz and Lysholm were also contributors. Lysholm has a few Power 5 offers as well. Brandt is a transfer from St. Bernard.

Ellinghouse on his DL: “Zeke is incredibly explosive. He’s got an unbelievable future. Caden is very disciplined and works hard. He’e one of the better D-lineman in the area in my opinion. Jake is a really hard worker. I’m really high on him. He’s a great all around football player. Hunter will most likely end up going to Columbia. He’s a really good interior offensive and defensive lineman who has great size. Cameron Brandt is a long armed big kid who’s explosive and strong. He’ll get some serious minutes.”

Other young contributors will emerge, but Pulido is the top returner at linebacker. He made 22 tackles in the spring.

Ellinghouse on his LBs: “Angelo is a tough nosed hard working kid. He’ll be one of the anchors of our defense and the physical force of our team. Overall, our linebackers are young, but we have some guys we’re expecting to step up and really work hard. They have some big shoes to fill.”

This group is another strength for the Trailblazers. Ramsey could be an NFL guy some day and the other three are fantastic high school football players with bright futures. Lewis and Jones have received multiple Division 1 scholarship offers.

Ellinghouse on his DBs: “Jonah is a high level kid. It’s been awesome watching him develop. We can’t get a play off on his side of the field all camp. He’s going to explode on the scene this year. He’s 25% better than anyone has ever seen him play. Khalil will be playing safety. He’s as big and as athletic as they come. I’m excited to see him embrace his new role after coming over from receiver. Kamari is the best safety in the state in my opinion. I think he’s a future NFL product. He’s smart, athletic and physical. D’Shawn will either be playing at Harvard or Princeton next season and he’s one of the few guys that will be playing on both sides of the ball as a receiver too. He’s very explosive.”

The best case scenario for Sierra Canyon is a 9-1 or 8-2 regular season. 10-0 isn’t out of the question, but it feels like playing Servite, Centennial and Saguaro will result in at least one defeat.

This Trailblazers team will beat Paraclete to win the Gold Coast League and then they should be a Division 1 playoff team in the Southern Section. Don’t expect a playoff upset against St. John Bosco or Mater Dei, but Sierra Canyon is still a team on the rise.

“Last year in my opinion was our best overall football team and it was disappointing to not be able to compete on the big stage with them because I really feel like that team would have done some really great things like some of the teams we’ve had in the past. We started as a new program and over the last 12 years we’ve climbed the ladder. We started as an eight man team and now we’ve won in Division 4, Division 3 and Division 2. Being considered one of the top teams is an honor. That means our program is in strong shape.”

“We graduated a lot of players from last year’s team, but I gotta say I love the kids on this year’s team. Our JV team was undefeated last year and was really loaded with talent. We’ve got a good core of kids that have great experience and have played in the big games and we’ve got some new kids and young kids who are trying to figure out how we do it and the brand of football that we play. It’s a great deal. I’ve been coaching for 24 years and this camp, I have a good feeling about it. It’s a bunch of kids that aren’t out there complaining. They’re enjoying being with one another, working hard. They’re going through the hard stuff together and creating a brotherhood and a friendship. I really hope that will pay off.”

“We have without a doubt the hardest schedule we’ve ever had as a program. We’ve got a tough road ahead of us. We’re excited about the challenge and I’m excited about this team, it could really grow into something special. We’ve got some work to do, we’re not there yet, but most teams aren’t this time of year.”

“We’re really excited about our defense. We feel like our D-line is as good as we’ve ever had. We have six guys there who are athletic, strong and mean and get after it. That will be the heart and soul of our team. Our defensive backfield is as good of a defensive backfield as you can have. Our linebackers are young, but we have some guys we’re expecting to step up and really work hard. They have some big shoes to fill.”

“On offense, we’re going to hang our hat on our offensive line. I think we have a good strong group there with good game experience and a lot of talent. I love our running backs too. We’re going to develop an offense around those guys and I think we’ll be pretty explosive.”