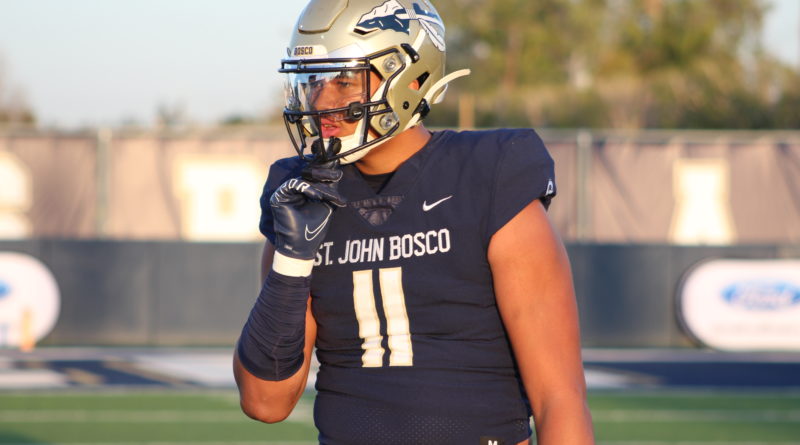 SBLive is previewing the Top 50 high school football teams in California ahead of the fall 2021 season. Here’s an inside look at the St. John Bosco Braves of the CIF Southern Section, the No. 1 team in our countdown.

Houser and Clarkson split the QB reps 50/50 last season. Expect that to happen again this fall. In the spring, Houser threw for 643 yards and seven touchdowns. He also rushed for a touchdown. Clarkson completed 34 of 52 passes for 645 yards and 10 TDs. He also carried the ball 37 times for 217 yards and one touchdown.

Negro on his QBs: “Katin has had a great offseason from April to August. He’s had a great fall camp. We’re still at the moment going to be playing both players, but our goal is to try and settle on one. If one doesn’t emerge, we’re going to continue to do what we did in the spring. Katin has done a phenomenal job in terms of becoming an elite quarterback in the SoCal area. Pierce is a junior and another Division 1 offer guy. He’s a little bit more dynamic in terms of being able to explode in the run game. He’s versatile and a great leader. Both kids are great leaders. They’re both excellent field generals with a lot of confidence and our offensive guys have confidence in both of them. We’re pretty fortunate to having this much talent.”

All three Bosco tailbacks will be Division 1 college football players and they’ll all see the field this fall. Luke is the returning starter. He rushed 27 times for 366 yards, and five TDs last season. He also caught 12 passes for 145 yards and one touchdown. Bates was St. John Bosco’s leading rusher in the spring. He had 52 carries for 465 yards and six touchdowns. Hayes carried the ball 48 times for 313 yards and three TDs.

Negro on his RBs: “All three of these guys are very explosive and very similar runners. We’re going to run a lot more 20 personnel this year which puts two of the three of them on the field at one time. They can also all split out and play in the slot a little bit and we can throw the ball to them out of the backfield.”

The top recruit in this group is tight end Matayo Uiagalelei, who is also a stud on defense on the D-line. An issue for the Braves last season was that they didn’t have a home run hitter at the receiver position. If one of these receivers can be a legitimate deep threat this season, the Braves will be able to do anything they want on offense. That position is an x-factor.

Negro on Matayo Uiagalelei: Matayo is a two way guy. He’s a mismatch. We can do some many different things with him. He’s a nightmare in terms of trying to match up with him from a defensive standpoint. We can play him on our O-line or split him out and put him one on one with smaller corners or DBs. We can also run behind him because he’s such a physical run blocker. He’s stronger this year and we think he’s going to have another breakout season.”

Negro on his receivers: “All of our guys besides Jode McDuffie are back. Jaceon, Chedon and Logan are back. We’re looking for a lot of productivity to come from those guys. They can all be moved around and are all very versatile, which bodes well for us offensively because we can do some different things. Lucas Reynoso is someone that’s emerged for us along with Raiden Brown. Jahlil McClain is going to be an impact guy who I think will burst onto the scene. He played a lot of defense last year, but he’ll take that Jode McDuffie spot in the slot for us. He’s really good underneath coverage and he can stretch the defense. He’s going to be an impact player.”

Greene is a blue chip prospect, which is rare for a West Coast offensive lineman. Talavou and Molio’o are Division 1 talents and returning starters. Haney and Lutke are returners but new starters.

The four returning starters of Uiagalelei, Burrell, Finau and Satele make up the best D-line in the state. Uiagalelei and Burrell are Power 5 guys. Uiagalelei had 12 tackles, a sack and an interception last season. Burrell has been making plays for years. As a sophomore, Burrell made one of the game clinching plays in the Braves’ Southern Section championship win when he intercepted then-Mater Dei QB Bryce Young. Finau and Satele are run stuffers. Finau made 15 tackles in the spring and Satele made 30. He also had forced a fumble and had a sack.

Negro on his DL: “This group is one of our strengths. Matayo plays defensive end and can also line up inside. Malachi plays in our nose position. Jairus and Nathan are returning starters for us too. Jordan Lockhart is going to factor in for us too and do some things off the edge. We’re pretty talented up front.”

Viliamu-Asa is the top player in this group, but he’ll miss the season through injury. There is a chance he comes back at the end of the year, but it’s unlikely. Woods will be the leader here. He made 27 tackles and had an interception in the spring. Bryant made 31 tackles and had one tackle for loss last season, plus 1.5 sacks. Tuaolo made five tackles in the spring and had a sack. Archie made 14 tackles.

Negro on his LBs: “Jalen Woods is a dynamic, versatile and physical player. He’s great in the run game and he’s a guy that can blitz well. Deven Bryant played a lot last season. He’s very versatile too and can play in a bunch of different schemes, which really helps us out. Ryan Tuaolo is an up and comer for us. He’s going to play what we call the star position. Elias Archie will play there too.”

This group is LOADED with depth. Only Mater Dei can compete with this type of talent in the secondary. Woodyard, Jones, Williams and Frausto-Ramos are all national recruits. Hala is committed to BC and Beasley, Lee and Harley have all received offers as well. It’s tough to see how everyone will be able to see the field, but Negro and his defensive coaches have a plan.

Jones and Frausto-Ramos are transfers from Alemany. Everyone else was here a year ago. Woodyard made six tackles in the spring and Williams made seven. Both will see an increased work load as sophomores. Hala made 41 tackles and had two interceptions as a junior. Beasley made 20 tackles. Harley made 24 tackles and blocked a punt.

Negro on his DBs: “Marcelles and Peyton will be major impact players as sophomores. They both played a lot as freshmen. We’re very pleased with their progress over the past few months. Ty Lee is a very talented safety. RJ Jones is a phenomenal player. He’s going to help us on the back end at the safety position as well along with Jaxon Harley and Riz Hala. Tayvion Beasley and Jshawn Frausto-Ramos are corners. They’ll play in a lot of our nickel situations. They’re very talented and versatile. They can play on the outside or the inside and they’re physical in the run game. They have great ball skills. Our defensive backs overall are very experienced, we have a lot of depth and we think they’ll be a strength of our team.”

The best case scenario for St. John Bosco is an undefeated state and national championship season.

Miami Central will be a tough game for the Braves and playing Servite will be a challenge too, but St. John Bosco will be the definite favorite in both. The Mater Dei regular season game could go either way. The worst case scenario for the Braves in the regular season is dropping two games. Losing one or none is more likely though.

The most realistic scenario for St. John Bosco is meeting Mater Dei in the Division 1 Southern Section championship game. That’s been the matchup every year since 2016 and it looks like that will be the case again in 2021.

“Defense I think is going to be the strength of our team. Ten of our 11 starters are back from the spring. We’re so versatile there. We can run any scheme that we want and then not have a lack of production. It’s really encouraging that we can run all of our packages and not have to make a lot of substitutions. We’re smart on defense and we can run. We’re very fast and can get to the football in a hurry — even our D-line guys. Overall on our team, we have a ton of depth. We play a lot of guys and we can stay fresh through a four quarter football game. That’s very helpful for us.”

“One of the improvements we really have to work on as a team is our kicking game. We have a new snapper, punter and kicker. That’s a big phase of the game on Friday nights that isn’t exactly sexy to think about, but it’s something that’s very important. I’d like to see our young offensive linemen start to emerge as well. If they continue to progress at the level that we expect them to that’s going to help us out as well. We need to stay hungry and not be complacent. That’s what happens sometimes when you have a really talented team. They think they’ve arrived, but we have to stay hungry.”

“Our expectations are obviously very high. We’re playing a national schedule and we have national expectations. We understand that if we win a league title, Section title and then state title, we’re going to be in the mix for that mythical national championship. That’s what we’re expecting and want to be a part of and so our goals are aligned with that. We want to beat our national opponents in the preseason. We want to win a Trinity League title, which is very difficult. We want to win a Division 1 Southern Section championship and then beat De La Salle in the state game. That’s been the goal for the last ten years and we think it’s realistic. We just have to put the work in and develop chemistry. If we do that and stay healthy then we’re going to have a shot.”