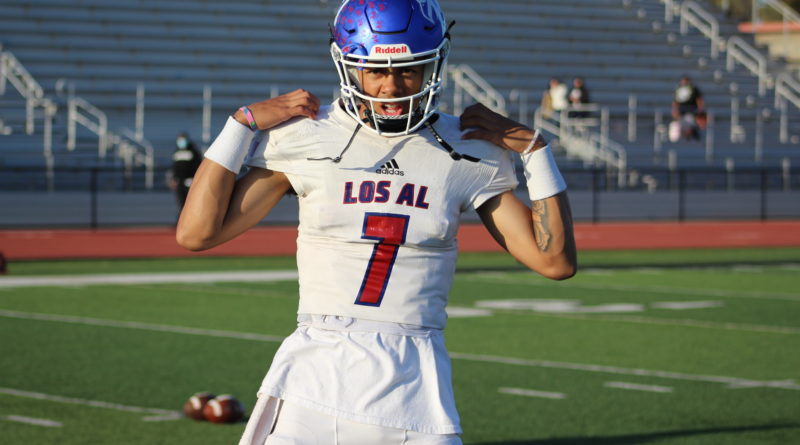 SBLive is previewing the Top 50 high school football teams in California ahead of the fall 2021 season. Here’s an inside look at the Los Alamitos Griffins of the CIF Southern Section, the No. 8 team in our countdown.

Coach Fenton: “Makai is a five star too.”

2021 spring stats: 43 catches for 756 yards and nine TDs, 15 tackles and intercepted four passes on defense, returned a punt for a TD

Coach Fenton: “David is a three year starter for us. He has scholarship offers from Army and Navy.”

Coach Fenton: “Adam has an offer from Utah State.”

Coach Fenton: “Ethan didn’t play in the spring, but he’s a national recruit.

Coach Fenton: “Gavin is a three year starter for us. He was Athlete of the Year in the Sunset League in the spring.”

Coach Fenton: “We moved Brian to linebacker and he’s probably been our most productive defensive player in camp. He played running back and safety last season.”

Los Alamitos grad and former Dallas Cowboys defensive back Orlando Scandrick was hired as an Associate head coach this offseason.

“He brings a lot,” head coach Ray Fenton said. “What he really brings is identification to guys who want to play in the NFL. He’s a former Griffin who then had an amazing career in the NFL. He brings relatability to the elite football players on our team. He can get them to understand what it really takes … We have some kids on our team who we think could be playing on Sundays and Orlando can help mentor those kids to show them the good, the bad and the ugly that comes with all of it.”

The best case scenario for Los Alamitos is an undefeated regular season and Division 1 playoff appearance. The Griffins certainly have a chance to make that happen with their talented roster.

8-2 to 10-0 in the regular season is possible for this group and 8-2 may even be a little disappointing. Los Alamitos has a generational QB and a generational WR group. They should win the Sunset League and then most likely qualify for the Division 1 playoffs. Competing with St. John Bosco and Mater Dei will be a stretch, but the Griffins are in a better position to do so than 99% of other teams in the Southern Section.

“A few years ago we started six freshmen and a lot of sophomores and then last year those guys were juniors and sophomores and now this year they’re upperclassmen. This is our team right here. They’ve grown up with us, they’ve been in the system a long time and they’re a mature group. We have the highest expectations of any team I’ve coached in 36 years. We’re extremely talented at the skill positions and we’re as big and physical of a team as I’ve been around up front. We’re really blessed. I don’t deserve all of these guys being on my team, but I’m going to enjoy it.”

“The great football teams, the ones that win it all, have great chemistry and our guys are so specialized with their position groups that we haven’t blended together as a team yet. We have to do a better job of blending these guys together on both sides of the ball. We’re taking a trip up to Fresno to play Buchanan in a couple weeks and we think that trip up there will help solidify our team unity and then we’ll come back and play Santa Margarita. From there, we’ll buckle up and get ready for the Sunset League.”

“Our goal is to play 14 games. If you combine talent with hard work, you get 14 games. We think that’s where we’ll be.”