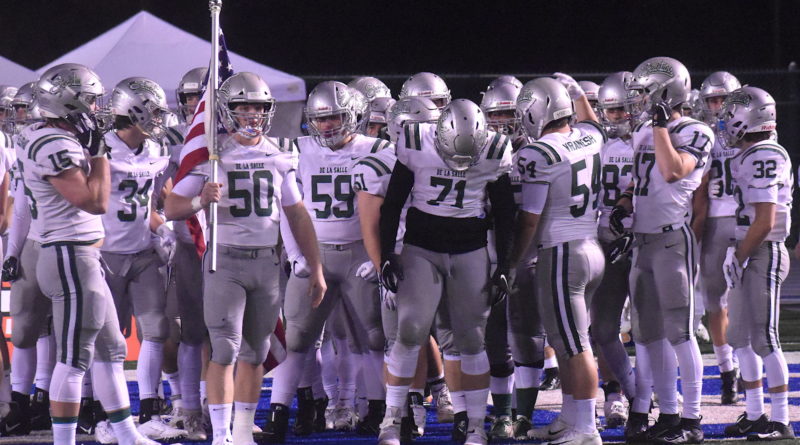 SBLive is previewing the Top 50 high school football teams in California ahead of the fall 2021 season. Here’s an inside look at the De La Salle Spartans of the CIF North Coast Section, the No. 3 team in our statewide countdown.

Berry is a 4-star prospect and Arizona commit as a CB prospect, but his main role for the Spartans is at safety, in addition to WR. He was tied for first on the team with 108 yards and two touchdowns receiving in the spring, and was second in KR yards.

A 3-star San Jose State commit, Perkins had 13 tackles, two tackles for loss, and two sacks in the spring. He also gets a bit of run at RB.

The 3-star OL is the anchor of De La Salle’s O-line at right guard.

Tagaloa is a 3-star Cal commit at TE, and also a big factor at DE.

A first-year starter, Dermon got reps as a backup in the spring, and completed 11 of 16 passes for 138 yards and two touchdowns. Coach Alumbaugh said that Dermon is well-rounded, with solid size and athleticism plus a good arm, but his very best attribute is his leadership and proclivity to get the best out of his teammates.

Meredith will continue to be a important player on both sides of the ball as a senior. In the spring, he was third on the team in receiving yardage and also had 10 tackles.

A 4-star TE with 11 Power-5 offers, Flanagan is arguably the top breakout candidate for De La Salle from a statistical perspective.

Jones is a major factor at LB with the ability to play inside or outside, and will also start at center. He had 12 tackles (two TFLs) in the spring.

Tofaeono is the Spartans’ starting left guard, and a very important contributor at DL.

De La Salle has won the North Coast Section for 28 seasons in a row. And while the Spartans will be the last to tell you about it, they have a 315-game winning streak (with two ties) against NorCal competition. Additionally, some say that other than them, the North Coast Section is set to have a bit of a down year. While De La Salle never operates under this mindset, the only question about what’s realistic this season from the outside looking in is whether there’s even a semblance of a chance that the Spartans get knocked off in the NCS playoffs.

That said, De La Salle will be considered a fairly heavy underdog if they do make the CIF State Open Division championship. That’s been the case for a few years now, but the Spartans know very well what they’re up against, and there’s a reasonable chance that this is the year they break through again at the state level.

“The goals that we have are day-to-day expectations on how to do things right. A byproduct of doing that, of working hard, of being good members of the community, is success. The state championship being in front of us is a good motivator. Of course that’s our goal every season. But that’s not what we’re focusing on. We don’t even talk about it day-to-day at practice or anything, or at all really. What we’re actually talking about is not fumbling, conditioning, doing homework. Things like that. Not just talking about winning a championship all the time.”

“This year’s group really enjoys being around each other, and they’re enjoyable to work with … They’re just excited to be out there together.”