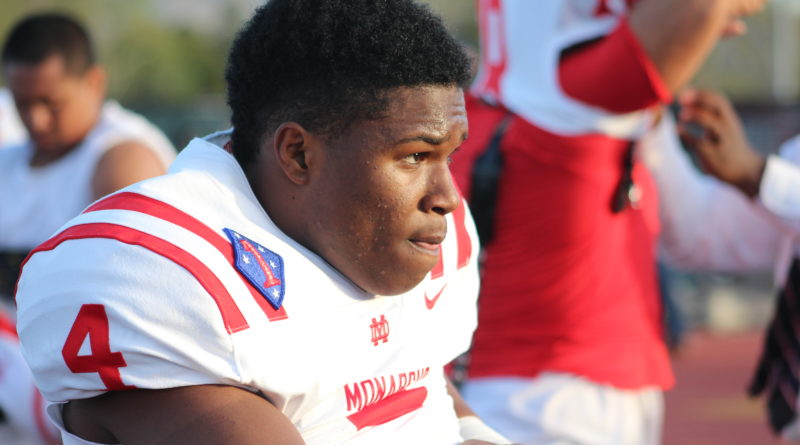 SBLive is previewing the Top 50 high school football teams in California ahead of the fall 2021 season. Here’s an inside look at the Mater Dei Monarchs of the CIF Southern Section, the No. 2 team in our countdown.

Note: Mater Dei’s Week 0 game against Corona Centennial was canceled due to COVID-19. Centennial had a stoppage and wouldn’t have had enough practices necessary to play the game.

Brown had as strong of a freshman season as possible in the spring. He completed 74 of 107 passes for 973 yards, 15 TDs and one INT. He also rushed for one TD. Brown has received scholarship offers from Arizona, Pittsburgh and Utah. He’s ranked as the No. four QB in the 2024 class by 247Sports.com.

Rollinson on his QB: “We have tremendous confidence in Elijah and we’re now giving him more responsibility in our offensive packages this season.”

Brown (pictured above) is one of the most explosive tailbacks in the nation. In the spring, he rushed 53 times for 367 yards and five TDs. Bryant rushed for two TDs as a freshman on varsity in the spring.

Rollinson on his RBs: “Raleek is No. 1 or No. 2 in terms of multi-purpose backs in the nation depending on where you look. Ajon has a good wiggle to him. He’ll play a lot snaps at tailback. Jordon will be a freshman to watch for us.”

Williams was a red zone weapon in the spring. In five games he made 16 catches, with five coming for touchdowns. Barkate should have a breakout senior season after not playing too much as a junior. He’s received scholarship offers from Arizona State, Notre Dame and Oregon, among others. Craig will play on both sides of the ball. In the spring, he caught seven passes for 147 yards and two TDs in addition to playing defensive back. He’s received a scholarship offer from Arizona State. Shannon has a few Division 1 offers as well.

Rollinson on his pass catchers: “CJ Williams, what else can I say. He’s a four year experienced kid — a top wide out in the country. I can’t wait to unveil Cooper this season. He’s a great route runner who can take the top off of the defense. Quincy is probably the only Monarch that will play on both sides of the ball. He’ll be used situationally in the defensive backfield as a cover guy and he’ll start in the slot on offense. He’s an incredible athlete. Look for Kassius Ashtiani to give us quality reps and help us tremendously. James should get some quality reps too. Jordan will play a lot too. He’s a young kid who will see time. The junior receivers are backup wide receivers, but they’re pretty good. Spencer is huge. He can put his hand in the dirt as a tight end or line up in the slot. He’s a big target, we’re looking for big things from him. Jack Ressler got a lot of valuable reps in the spring. He’ll most likely start in the slot. He’s an unbelievable possession receiver with good speed.”

Both Tolo and Carter are Division 1 prospects.

Rollinson on his OL: “Jack Laphen is coming on very strong as an offensive lineman. He could possibly start. Mosula had a great spring season for us and we look for him to have an impact on our offensive line. BJ Tolo will be in his third year starting. We’ve moved him to center and he’s getting very comfortable. Brandon is going to be a contributor. DeAndre started as a freshman for us in the spring season. He improves on a daily basis.”

This group has solid depth with Breland, a sophomore, being the top college prospect. Kongaika has a couple of offers. He made 14 tackles and recovered a fumble in the spring. Moa had 14 tackles in the spring and Uiagalelei made five.

Rollinson on his DL: Jacob Kongaika can play nose tackle or defensive end. He’s a big, strong and powerful kid. He’s a force. Sione Moa is very quick. We struggle to block him on a daily basis. Ta’ita’i played some in the spring, but he’s had an incredible summer. He’s a big strong kid. He’s going to become a force. Aydin Breland will see a lot of snaps as a tenth grader because of his incredible size. Kaho has incredible size and power too. Jesus “Zeus” Venegas will play a lot as well. We have great depth. I am comfortable playing eight defensive linemen.”

Mater Dei has the best linebacking corps in the state. When Bailey is healthy, he’s the top individual ‘backer in California. In two games last season, he made 13 tackles, had four sacks and a forced fumble. Sua made 20 tackles with 4.5 coming for loss in the spring. Kerry made six tackles and had a sack in three games. Fata made 11 tackles.

Rollinson on his LBs: “David is one of the top linebackers if not the top linebacker in the nation. He’s an athletic freak. Lyrik Fata is a kid to keep an eye on. He’s really emerged and will get a lot of snaps at outside linebacker. Eoghan is an incredible talent. He’s highly coachable. Malaki is a great downhill player who will hit you very hard. Leviticus is a force on the inside. He’s started since his tenth grade season for us. He’s a run stopper. Tanner Williams will play a lot of special teams and back up some of our ‘backers. We have high regard for him.”

Jackson’s interception against St. John Bosco in the spring clinched a victory for the Monarchs. Jackson is also a great sprinter. He tied the state record in the 100 meters this spring with a time of 10.25 seconds. Hunter had two interceptions in the spring and was named the Trinity League Defensive Player of the Year. Brown had a very promising spring recording six tackles. He’s received scholarship offers from top schools in the country including Alabama, Georgia and USC.

Rollinson on his DBs: “Domani is the No. 1 ranked DB in the nation. He’s incredibly fast. Josh is a four year starter. He has incredible ability and cover skills. Cameron Sidney is a two year starter coming back for us who has incredible cover skills too. He’s doesn’t get as much press, but he’s really good. Christian is our starting strong safety. He’ll play some linebacker too. He’s a big hitter who has good cover skills. You’re going to hear nothing but great things about Zabien Brown. He’s a great cover guy. He’s our next great DB. We have incredible depth in the secondary. Jisaiah Sanford will play too. He’s one of the reasons we have such great depth.”

Rollinson on Meyer: “Chase has an incredible leg. He kicks off 70% of the time into the end zone.”

The best case scenario for Mater Dei is an undefeated state championship season.

Duncanville and St. John Bosco will be very tough games in the regular season, but the Monarchs are certainly capable of winning both of them. Servite could be tough too, but Mater Dei will be the definite favorite. The most realistic scenario for the Monarchs is meeting St. John Bosco in the Division 1 Southern Section championship game. That’s been the matchup every year since 2016 and the last two title games have been coin flips with each team winning one game apiece. If those two teams play again for a championship, expect another coin flip.

The main reason St. John. Bosco is ranked ahead of Mater Dei to begin the year has to do with the Monarchs’ offensive line. They have to replace three starters.

“The o-line is the wildcard [on our team],” Bruce Rollinson said.

“Defensively we have eight starters coming back and then a host of young talent. Going against our defense in practice is a tough task for our offense, which I believe will make our offense better. Even I stand back and say wow and I just watch them go. We have incredible team speed and a lot of guys that can make big plays on defense. The secondary all returns too. They’ve been playing together since they were freshman. We can lock it down on the back end.

“Offensively, we’re young. The o-line is the wildcard. We had to replace three guys. But we have experience at the skill positions. We need to replace the punter too. Our special teams units will be very good because we have so much young talent. That’s where a lot of the special young players will play.”

“Our goal is always to win a CIF championship. That has to be your number one goal. You’ve got to win the CIF championship to win the state championship and you have to win the state championship to be a national champion. As the head football coach at Mater Dei, I want to create an environment and a culture where we play Mater Dei football: run and hit on D and move the chains on O. Those are always my expectations. I’ve got the talent to do that. We want to have great special teams too and play team football. It’s not about the individual. It’s about your unit, the offense, defense or special teams. That’s the key to our success. If it becomes an individual thing with the NIL or recruiting and scholarship offers, then you’re going to self destruct.”