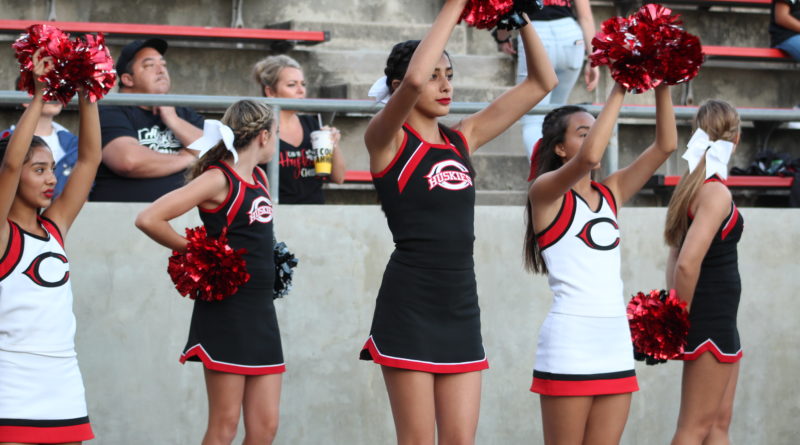 SBLive is previewing the Top 50 high school football teams in California ahead of the fall 2021 season. Here’s an inside look at the Centennial Huskies of the CIF Southern Section, the No. 9 team in our countdown.

Centennial’s Week 0 game with Mater Dei was canceled due to COVID-19. The Huskies had a stoppage and wouldn’t have had enough practices necessary to play the game.

Carter has received scholarship offers from BYU, Kansas and Washington State. In the spring he completed 18 of 33 passes for 320 yards and one TD. He also had 13 carries for 161 yards and four TDs. Carter was part of a trio of QBs who played for the Huskies in the spring.

Conklin has received scholarship offers from five schools including Arizona State. He completed 26 of 41 passes for 429 yards, five TDs and one INT. He also rushed for a score. Conklin was also part of the trio of QBs who played for the Huskies in the spring.

Logan on his QBs: “Those two have really pushed each other. It’s early, but those two will most likely split time again.”

This group doesn’t have much experience, but Logan thinks they’ll be very good. Cortes rushed for a TD last year.

Logan on his RBs: “Jayson looks like he’ll be the leader of that group, but the two sophomores are pushing him. Jayson has an incredible work ethic and he’s a tough runner.”

Jimenez was Centennial’s top wideout last year hauling in 18 passes for 336 yards and four TDs. Faupel had seven catches for 67 yards and a TD. Kennybrew mostly played JV while Riley and Young are transfers. Riley has scholarship offers from ten schools including UCLA and USC.

Logan on his WRs: “We’re young here, but there is a lot of good talent there.”

Logan on his OL: “AJ is a four year starter for us and the leader of the group. We’ve moved him from tackle to center. We’re younger here overall. Perez was the center last year and will play guard this year. Teloma has an NFL body but hasn’t been able to play much. We’re hoping he has a complete season. Brent and Wade Helton helped us last year as freshman so they’ll be big. They’re our tackles.”

Lightfoot made 17 tackles last season. He’s received a scholarship offer from Fresno State. Conti made five tackles as a sophomore and Jackson made one. Benoit is a transfer.

Logan on his DL: “We’re really excited about our defensive line. We play a 3-4 and we feel like we have three great players there and then good depth.”

Wenzel made 21 tackles and had a pick six last season. Schumacher made eight tackles a year ago and Anderson made 11.

Logan on his LBs: “Wenzel and Schumkaer played inside ‘backer for us last year and they’re both really good players. Ethan will be a three year starter. Samarai Anderson will play outside linebacker. He plays with his hair on fire.”

Centennial has incredible depth at defensive back. Mickey is committed to Notre Dame and Aaron Williams and Chambliss are both Division 1 recruits.

Logan on his DBs: “This group is a strength of our defense.”

Depending on how Centennial fares in its non-league games, the Huskies could either be a Division 1 or Division 2 team. They’ll most likely be a Division 1 team, but dropping into Division 2 will give them a shot at their first Section title since 2015. Expect Centennial to bounce back and win the Big-VIII League this season after losing to Norco in the spring.

The most realistic scenario for Centennial is to win the Big-VIII League and qualify for the Division 1 playoffs. They’ll either be a quarterfinalist or semifinalist in that Division.

“Our expectation is to compete for a CIF title. That’s what it is every year. Where we’ve lacked in past years is having the offensive and defensive lines playing at a high level at the same time. It’s a struggle to match the size that we see with those teams in the playoffs and I feel like this year we actually have the talent on both lines, which is pretty rare. We feel like that gives us a chance going in. We like our skill guys too — we always have.”

“We’re a different team this year than what we’ve been in the past couple years. Both of our lines will be a strength along with our secondary. We have some great athletes on offense, especially at the receiver position. We have a good corps there, depth all across the board. We want to improve on our kicking game. We’re a little inexperienced there. Both of our QBs were sophomores last year so we want them to gain more experience to know when to change plays and so far they’ve both showed they’ve made a big jump from the spring to this year.”