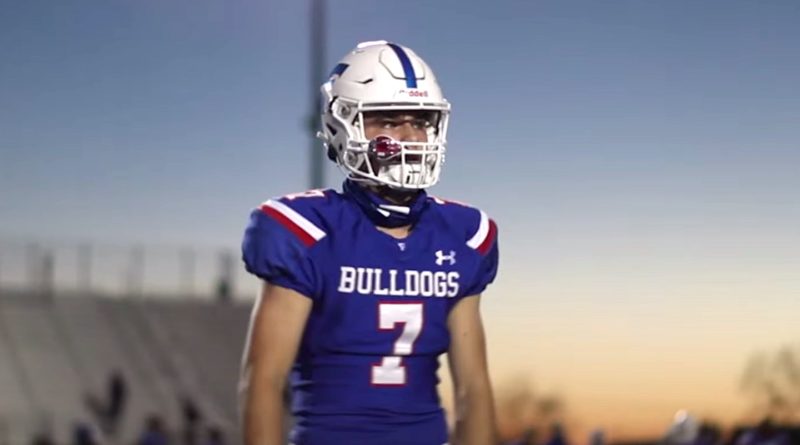 SBLive is previewing the Top 50 high school football teams in California ahead of the fall 2021 season. Here’s an inside look at the Folsom Bulldogs of the CIF Sac-Joaquin Section, the No. 7 team in our countdown.

(All games are at 7 p.m. unless noted otherwise.)

Tremain had one of the best spring seasons of anybody in the state, throwing for 2,024 yards and 27 touchdowns, plus running for 178 yards and two touchdowns, in just six games. He was named the Sierra Foothill League MVP.

A 4-star ATH prospect, Flores caught for 606 yards and 10 touchdowns as a sophomore, and enters his second half of high school sitting on two dozen D-1 offers. He made first team all-league.

Lyons was already a Power-5 prospect entering his sophomore season, but had one of the biggest recruiting blowups in the country this spring and got most of his 29 offers in a short flurry. He caught for 281 yards and five touchdowns en-route to making first team all-league on offense, and was also a force at DE with 19 tackles, 3.5 tackles for loss, two sacks, a forced fumble, a fumble recovery, and a team-high 13 QB-hurries.

Coach Doherty: “Walker didn’t play as a freshman, so the recruiting helped build his confidence. For him to go contribute on both sides of the ball, and get better week after week, and then get the reward of being a national recruit with committable offers … He’s unique as a blocker in the run-game and can also run and catch downfield with the best of them.”

Tremain was incredibly productive for playing only five games, finishing his junior season with team-highs of 57 tackles and 10.5 tackles for loss, in addition to only two sacks. He was named First Team All-SFL, and also happens to be a strong special teams player as Folsom’s kicker.

A 3-star TE with an offer from San Jose State, Norberg had nine catches for 136 yards in five games in the spring. While tight end is his main position, he has the ball skills and mobility to be a full-time regular wideout.

Bienvenue was one Folsom’s top breakout players in the spring, finishing with 19 tackles, a team-high 3 interceptions, and a forced fumble in just four games.

Coach Doherty: “He’s a ball-magnet, a playmaker, he’s incredible in the weight room. He’s everything we look for in a Folsom football player. Smart, versatile, physical, tough on all fronts.”

Arnaz was one of the Bulldogs’ most productive offensive players as a junior, catching for 486 yards and seven touchdowns and running for 105 yards. In total, he averaged over 100 all-purpose yards per game, and made first team all-league.

Another senior who’s a potential D-1 prospect, McMillan had 249 receiving yards and three touchdown catches in the spring, plus 29 tackles and 2.5 TFLs. He was named First Team All-Sierra Foothill League on defense, and is a prime candidate to make it on both ends this season.

In five games as a junior, Sisson had 22 tackles, was tied for second on the team with four tackles for loss and two sacks, and added four QB-hurries and a fumble recovery.

Brown caught for 199 yards and two touchdowns in four games last season. With outstanding strength and speed, Doherty considers him one of the highest-upside players on the team.

The reigning first team all-league guard will move to tackle this season.

Rheaume also made first team as a junior.

A versatile 3-star DB with an offer from Fresno State, Carillo made Second Team All-SFL as a sophomore for his 20 tackles, interception, and forced fumble.

Coach Doherty: “He’s absolutely legit. He started last season at safety because he’s damn-near the smartest, most physical kid we have, and knows every position defensively. We’ll move him to corner where his best position is as a college prospect.”

Masterson was all-league as a junior, recording 26 tackles (1.5 for loss) and a sack.

Wolfe didn’t even play four full games in the spring due to turf toe, but still was good for 25 tackles, four TFLs, a sack, and six QB-hurries. He could also be a major factor at WR.

Hendrick ran for 164 yards in four games as Folsom’s RB2 last season, and led the team with 8.6 yards per carry. This season he’ll likely carry a much heavier load.

Coach Doherty: “He missed his sophomore year with back injury, but he will be in the wide receiver mix. He’s the son of the great big-time D-1 potential, son of the great (NFL player) Onterrio Smith Sr. Before he got injured, he played freshman year and was great. And he looks healthy now, plus he’s gotten up to about 6-2.”

While there are numerous teams with at least something of a legitimate chance to go all the way in Division 1 in the Sac-Joaquin Section, the Bulldogs’ chances are as good as anyone’s. Many would call them the clear favorite if they’re at full health come playoff time. A whopping 14 rotation players return on offense, and the past 12 years or so indicate that it’s not a stretch to expect them to have one of the best offenses on the West Coast. Their defense doesn’t have as many big names, but it was already good enough for them to be the top-ranked team in the section last season, and many of their best defensive players are back this season as seniors.

If the Bulldogs do win the CIFSJS championship, they’d be in excellent position to make a state title run at the CIF 1-AA or 1-A level. If they win their regional bowl game to make the state championship, there’s a good chance that they’d end up playing the Southern Section Division 2 champion based on recent history, and would project to be the clear favorite in that matchup as well.

In fact, an unlikely but not implausible scenario is that Folsom not only wins out against Sac-Joaquin Section teams but upsets De La Salle in non-league play. In that case, it would be hard to see the Bulldogs not going straight to the CIF State Open Division finals after section playoffs. The fact that the above even needs to be mentioned as a possibility is a testament to how talented this squad is.

There’s no way around it: the Bulldogs are going to be heavily in the mix for a Division 1 title. Of their 17 all-league players last season, 13 come back, and that excludes a couple of major breakout players such as Smith and Wolfe who were injured last season but could emerge as Power-5 prospects. Even if they finish the season barely above .500, which is highly unlikely but not impossible, they’ll still be a championship contender if they’re fairly healthy come playoff time.

“[What stands out about] this group is the maturity, the focus, the discipline. Mature teams win championships. Last year’s group, this year’s group, they’re about as mature and focused as any team I’ve been around. They stay humble, focused, hungry, and motivated at the task at hand.”